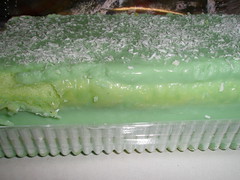 This pandan layer cake did the trick.  When Alycia refused to part with the junk food that she got from the children’s day party at her pre-school last week, I told her I will buy her her favorite cake.  When I brought the pandan layer cake home, she hurried to the kitchen and willingly gave me her bag of junk and said she doesn’t want to eat them anymore.  I was pleasantly surprised that it was so easy to trade with her something that she liked so much by swapping it with another item that she likes.  So the next time she comes home with a bag of junk food from school, I will bring her to the bakery and ask her to choose another healthier alternative in exchange with the junk food!

My maid caused a big stir and commotion last night when her Nepalese boyfriend tried to talk to her from outside the gate.  I was about to take my shower when I heard a commotion outside our house.  I peeped at the window and saw a group of about 4 guards apprehending a man.  I thought the man was  acting suspiciously outside my house, thus the reason why the guards apprehended him.  The guards were apparently very furious and kept shouting “bl**dy hell, you stay away from here, don’t let me see you again!”   Minutes later, the guard saw me peeping from the window upstairs and said this “you be careful, this Nepalese man was talking to your maid. He wanted to climb into your house.  Don’t say I didn’t warn you when your maid runs away.  We will be making a police report.”

I was really flabbergasted.  How on earth did my maid befriend a Nepalese man when we don’t allow her to go out?  I called my maid and questioned her.  Initially, she denied knowing the guy and said the guy wanted to talk to her.  When I asked why the guy wanted to climb into our house,  she denied that.  She kept saying “Madam percaya saya tak, guard tu bohong.  Lelaki tu tak panjat pagar”.  I just told her that whatever it is, just don’t cause any trouble to us coz having a stranger climbing into our house compound is a serious matter and I definitely do not want to get startled when I see a stranger in my house.

Anyway, I  quickly called hubby to inform him and I also told my hubby not to be too harsh on our maid coz we don’t want her to be full of vengeance and hatred towards us.  When he came back, he queried my maid again.  After using some reverse psychology and some humor, my maid finally admitted that the Nepalese man is her boyfriend whom she had befriended when she went out to dry the laundry and water the plants.  They see each other everyday.  They have also been exchanging love letters.  We told our maid that we will not stop her from seeing her boyfriend but she can never bring the guy into our house and she cannot go out with him.  After all, she only has a remaining of 1.5 months to work for us and she can do whatever she wants thereafter.  Long story cut short, we managed to have a heart-to-heart talk with her and she confessed many things to us.  We also told her that we had found out that she’s been passing letters to another guard, to which she was really shocked to know that we had discovered her dalliance with the guard.

What I don’t understand about these Indon maids is how can they be in love so easily with so many men whom they barely know at the same time.   There was a similar case with my 2 previous maids when we found out that they had dalliance with several men at the same time!  Maybe they were all stricly platonic relationships and they were just trying to find something fun to do to kill loneliness and stress?  I don’t know, I just hope I get to analyse their behavior better, understand them better and know how to tackle them better so that all these problems will not recur with my future maids.

The blisters and calluses on my toes are not getting any better though I have stopped my daily jogging sessions for almost 4 months now.  The blisters are causing my toes to hurt whenever I wear pointed heels or graze the affected toes against hard objects. I should really see a skin specialist to treat those painful blisters one of these days. When I resume my jogging sessions after my baby pops out next year, I should also get some Blister Prevention patches from Go Engo to prevent more blisters from forming on my toes. I heard that these patches are specially created to help runners, hikers, dancers and athletes manage hotspots and blisters by preventing friction from rising during their workout sessions. I should also get some of these patches for hubby since he’s been complaining about painful feet after his workout sessions at the gym. 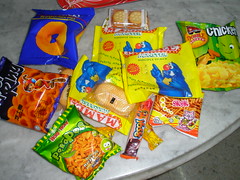 Whenever there are birthday parties or children’s day party in Alycia’s pre-school, I would be worried about what junk food she would be bringing home coz it would be almost impossible to stop her from eating them.  All hell would break loose if I ever try to stop Alycia from eating them.  Last Friday, Alycia brought home a bag full of MSG, sugar and color laden junk food – sweet colorful jellies, sweets, chocolates, Mamee, Cheezels, etc.  Sometimes I just don’t understand how the teachers and parents think to be buying and giving away these unhealthy food to toddlers.

I was trying to find a way to trade these junk food with her and finally, I thought of a way;  and it was oh so easy.  With that item that I had bought, she volunteered to give away all these junkies to me with no threats or bribes.

Alice and Slavery Mum would like to know what my life’s proudest moment is.   Like most mums, mine was when I finally managed to cuddle Alycia in my arms and meet her face to face for the first time after carrying her for 38 weeks.

When I was carrying Alycia, I had gone through endless downs and many nerve-racking moments.  During the initial stage of my pregnancy when my gynae could not detect the sac in my womb, I was worried sick that it would be an ectopic pregnancy.  Weeks later, my sil who stayed with us had German measles and I was at risk of contracting it too.  I got even more convinced that I had German measles when spots started to appear everywhere on my body.  My gynae did a blood test to check for German measles and I had to wait for 2 weeks for the results to be out.  That 2 weeks was one of the longest periods in my life.  When the results were finally out and revealed that I had no German measles, I was overjoyed.  Many weeks later at around 20 weeks of my pregnancy, I started to have frequent contractions throughout the day.  A trans-vagina ultrasound scan showed that my cervix had shortened and upon the strict advice of my gynae, I was on partial bedrest for the next 3 months until I delivered Alycia.

Alycia was indeed a miracle, a baby whom I’d wanted so much to have and had gone through so much to conceive her.  The afternoon of 5th December 2003 was indeed the happiest and proudest moment in my life.  She was the most beautiful baby I’d seen.

When I purchased a new desktop computer last week, the vendor did not install any antivirus software to the computer. Hubby’s friend who is a computer specialist told us that we can download free antivirus software from the internet.  However, I always feel skeptical about downloading freeware from the internet.  Another friend of mine recommended NOD32, the world record holder of the coveted Virus Bulletin 100% award.  NOD32 has blazing scanning rates and unequaled heuristic which makes it the leader in the “next generation” Antivirus solutions for home and home offices.  I’ve since purchased this antivirus software and am pleased with the results.  However, should I feel dissatisfied with the software, I can get back my money within 30 days from the date that I had purchased it.