For the first time ever, I went shopping with Alycia and Sherilyn, minus the hubs, Baby and the maid. It was on Jusco members’ day too and the crowd I tell ya, it was madness coz those things were super duper cheap!  I wish I could buy everything I saw that I liked.

I thought it would be less stressful since I have one less little fella to watch over but I was wrong.  Actually I had prepared myself mentally that rascal #2 would be like a stray monkey, being let off the leash for the first time and my guess was correct.  Not only was she like a stray monkey, she didn’t want to help me carry things too.  Sher being Sher, she gave me tons of excuses to avoid holding her own water tumber bag and other things.  Poor Alycia, my filial and thoughtful daughter, she volunteered to carry most of the things… and hung the bags of loot on her arms till there were red marks on her arms.

When rascal #2 saw this little trolley car in the middle of the walkway at the kids’ department, she asked me if she could have it. I said it might belong to someone else and I told her to ask the lady next to the car.  She happily zoomed off and asked “aunty, is this yours? Can I have it?” LOL! 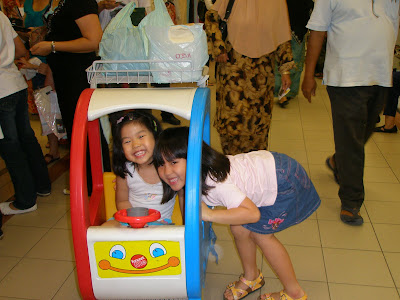 But I abandoned the car when the wheels couldn’t move straight. 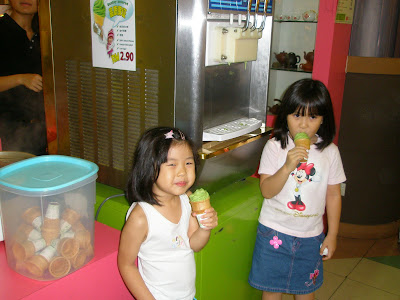 I had promised my brats that I would buy them McDonald’s ice-cream but the queue was horrendous! But my 2 gals were adamant they wanted the ice-cream and badgered me to queue up. I quickly pull them away and told them I would get them something else from the supermarket. But they saw a green tea ice-cream machine a few steps away and pulled me to it. No choice, had to pay RM2.90 for each ice-cream. 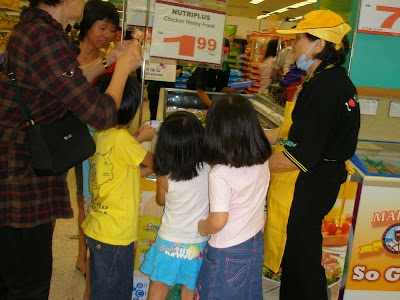 At the supermarket, my 2 brats hopped from one booth to another for free food sampling… from the cheese filled sausage booth which was their favorite to the yoghurt booth, to the Sunkist juice booth…. 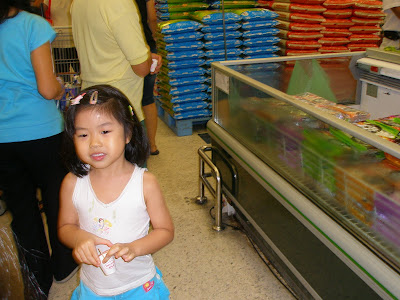 …to the tong yuen (rice ball) booth. The tong yuen with black sesame filling and peanut filling tasted so good. They also went to the tit bits section and helped themselves to the biscuits and junk food… and got reprimanded by the sales assistant. Gosh, I was embarrassed! 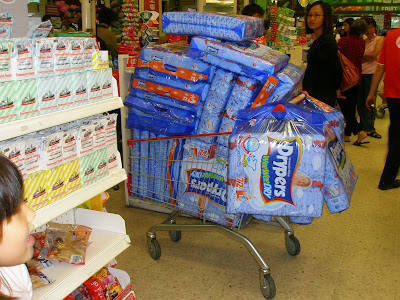 See this trolley filled with Drypers diapers?  Nope it’s not mine. A man filled his trolley with Drypers and made a few rounds, coz they were SO cheap at only RM32.99.  Normal price ranges from RM36.90 to RM42. 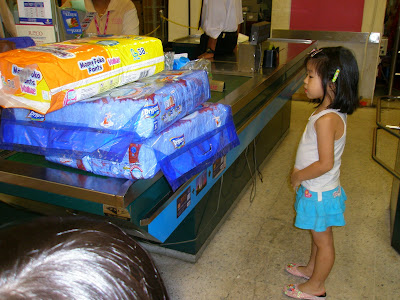 This is only my loot – 2 packs of Drypers and 1 pack of Drypers pull-up pants for Baby. I was SO tempted to get a few more packs but I could envision the hubs shaking his head in disbelief and passing his usual sarcastic comments when he sees the mountain of diapers lined up on the floor, waiting to be loaded into his car boot, LOL!

At the end of the shopping trip I asked Alycia if she wanted to follow me shopping again, just the 3 of us, she said NO!  She was really worn down helping me and her sister carry stuff!