Today marks the 2nd year my Baby was operated on.  Exactly 2 years ago today marks the change in our lives, change for the better, though the 3-week stay in the hospital was a nightmare where everything that could go wrong went wrong.  Hubs was hospitalized on the day of Baby’s surgery on suspicion of H1N1 and was isolated, I had high fever myself and was terribly weak but had to remain strong physically and mentally, Baby’s surgery had a complication and she was cut up again a week later.    But I thank God that we managed to wade through the darkness and saw light at the end of the long, long tunnel.

For those of you who have been following my blog, you will know what Baby and I went through from the moment my gynae detected that Baby’s right kidney was dilated at 14 weeks of gestation while she was still in-utero.  That moment in the gynae’s clinic up until the the surgery at 13 months old had been very tough on me. The gynae even feared that the baby would have Down’s Syndrome coz a dilated kidney is often one of the symptoms.  I subsequently went for an Amnio which confirmed that she’s one normal baby girl.   Happiness only resurfaced in our lives after the post surgery MCUG scan which revealed that Baby had no more kidney reflux.  Baby was 2 years old then.  The latest MAG 3 scan that Baby went through also showed that her right kidney is functioning and draining well and once again confirmed no more reflux and no blockage. 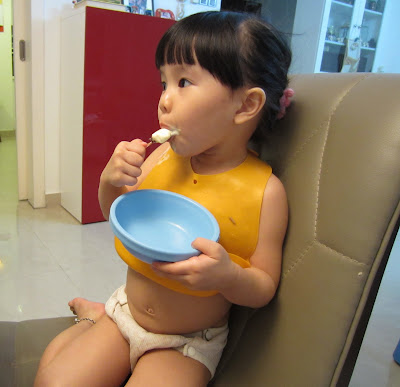 My very expensive Baby girl. She overcame all odds and all obstacles that were in her way. She’s one little cili padi, the bravest baby I have ever met.  Notice the scar below her navel?  That’s the cut for the 2nd surgery she went through 2 years ago.  I pray to God that He will bestow Cassandra with good health, happiness and no more surgery ever.