2 years ago, we celebrated our wedding anniversary in the pediatric ward of Penang GMC. It was a happy day for hubs and me, though Alycia and Sherilyn were not with us. It was the day Baby was given the green light to be discharged from the hospital after a 3-week stay. 2 years later, on the same day, we spent our night at the hospital again. With Baby too. She was puking non-stop since 5pm. While having dinner at a Japanese restaurant, Baby looked listless, which was very unlike this chatty girl. I kept asking her if she was OK and if she still felt like vomiting, to which she kept saying no and shook her head. The moment I carried her to place her on my lap, without any warning, Baby spewed hot lava onto my long flowing hair and clothes. My dress was drenched with strawberry flavored Nutrifresh and cream crackers which she had eaten half an hour ago. Eweeee, the stench was horrid! Thankfully the restaurant was just at our condo and my maid and I quickly brought Baby back to have a big wash up. She too was drenched in her own vomit. My maid had vomit on her face and clothes too.  Our shoes had stinky vomit too.

We spent the next few hours at the A&E Dept of the hospital. When the time came for the doctor to insert the PCM suppository and anti-vomiting suppository into her rectum, there was a BIG hooha in the dr’s room. I had expected it. Baby has a phobia of enema and all suppositories. Her frequent constipation had left me with no choice but to give her enema. She kicked very, very forcefully and used her hands to cover her butt when the nurse tried to insert the 2 supps in LOL! It was a hilarious sight though she was bawling her throat out. When I bent down to pick up her pants, she kicked me hard on my forehead! After a big struggle with hubby, nurse and doctor holding her down, the 2 supps were finally in, phew!! Thank God she was A-OK again the next day. I still could not pin point what caused the vomiting.

The cake which we were supposed to cut is still in the fridge. The big green tea cake has been in our fridge since Friday LOL! Yesterday hubs was busy the whole day. Today we were out the whole day. Hubs is having his usual basketball game now.  I guess we will only cut the cake and dig on it tonight.  Better late than never right? 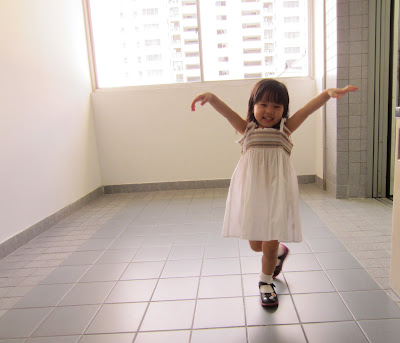