This morning was a mega hectic day for me.

After my pre-dawn exercise, the mil asked me to bring her to buy some stuff for her to bring to Hong Kong. Her flight was at 1pm today.

After I had sent the mil and her luggage to the lobby where the hubs was waiting, I thought I could finally do some backlog of work.  But my mobile phone rang. The school’s name flashed on the screen. OH NO!  Calls from school are not good. What could it be and who??

It was Drama Queen.   She told me that she had hurt her foot when she fell from the stairs. Her friends who ‘examined’ her foot commented that the ‘bone went inside’.  Sounds bad huh? DUH, yeah it does. I sped to the school.

At school… where was I to look for Drama Queen? I climbed up to the 3rd floor to her class but it was empty. Everyone had gone for recess. I dashed to the office but no sight of her. I went to the canteen but no sight of her too.  Cass also helped me look for her 2cher.  Aiyo, this is in true fashion of the drama queen. Always giving me drama. Finally after 15-20 minutes of searching high and low, we found her chit chatting with her friends in the canteen.  Lesson learnt – next time, tell her specifically where to wait for me. But touch wood, no more second time!!

Actually, Drama Queen fell this morning at our condo stairs. She thought she could be faster than us (Cass and me) by running 5 flights of stairs down to the lobby.  Cass and I took the lift.  But she tripped and fell.  On the first floor, the lift door opened and there she was. She told me that she fell and hurt her leg.  I thought it was just her usual drama.  She is pretty clumsy and always trips and falls.  So I just ignored her since she could still walk with us to the van.

Back at school again…

The doctor ordered an X-ray to be done for a better diagnosis.  There were 5 people ahead of us queuing.  Throughout our time waiting in the hospital, Drama Queen, on the wheelchair, had her face buried in her thick Brandon Sanderson novel. 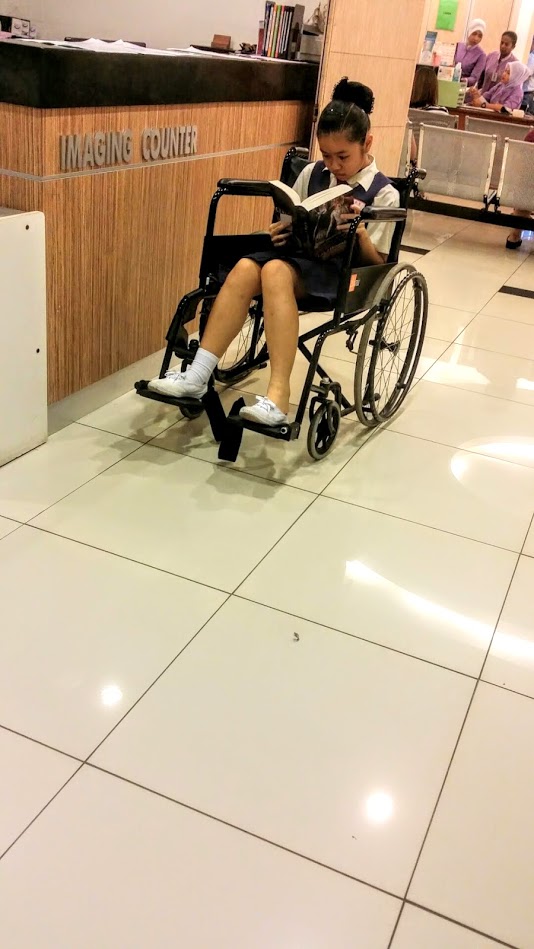 Below – Xray in progress. It’s the second time in her life time undergoing an Xray. The first was when she was slightly over  two years old and had her left thumb squashed by a steel kitchen door.  The bone chipped and it was a very bloodied scene. I was preggers with Cass at that time.  This Drama Queen used to be so prone to accidents till we bought her an accident insurance when she was a year old!

Diagnosis –  no fracture, no bone broken. Only a sprain.  That’s the good news.

The bad news is that she will not be able to participate in her 3 running events plus a dance event in her school sports day this Saturday. She was disappointed. Nonetheless, she will still be in school in slippers, as a spectator.

After leaving the hospital, I brought Drama Queen to buy a pair of slippers to be worn to school as her foot is now bandaged.