I received a little good news yesterday when Drama Queen came back from school. As she walked into the house, Drama Queen announced the news to me melodramatically, “and so the principal announced that we DON’T have to go back to school for UPSR tuition anymore during the holidays, YAY!!! Muahahahahahahahah!”

I was overjoyed to hear the news as that would mean a real holiday for me without having to wake up at 5am for 2 weeks during the school holiday. That being said, I wonder why her school has decided to cancel the originally scheduled extra classes. Other schools are still going ahead with the UPSR extra classes for the first 2 weeks of the school holiday. Could it be that the Government’s proposal to abolish the UPSR exam is now a step closer?  Perhaps it would be abolished as early as next year? Oooh, I am feeling hopeful!!

After lunch of homecooked porridge, Drama Queen quickly helped to wash all the dirty dishes including the pots and pans. This dawdler ain’t a dawdler when she sets her mind to do something that she has passion in. She has planned to bake a pie yesterday. She always has the itch to bake in the kitchen and spends a lot of time watching baking tutorials on You Tube.

After clearing the dirty dishes, she started to prepare the dough for the pie. I did not supervise her at all in the measurement of the ingredients. While I went out with Cass for an hour, she stayed home alone to work on the pie crust. Her maiden pie. We have both never baked a pie before so I could not offer her any advice. I only advised her not to turn on the oven or the stove while I was away.

She attempted to use her grandma’s new cake mixer but I told her NO NO NO!!  Coz we both have no clue on how to operate the machine.  Her grandma will be back from Hong Kong this Sunday and coming home to find a spoilt new cake mixer is the last thing she wants to know. With lots of creative juices flowing in her, she  found an alternative – by using an egg beater to mix the flour with the butter. Gawd, that is SO time consuming and I have zero patience for this. But this girl patiently mixed the flour and butter until a smooth dough was formed. All in, it took her over an hour to get the dough perfected. 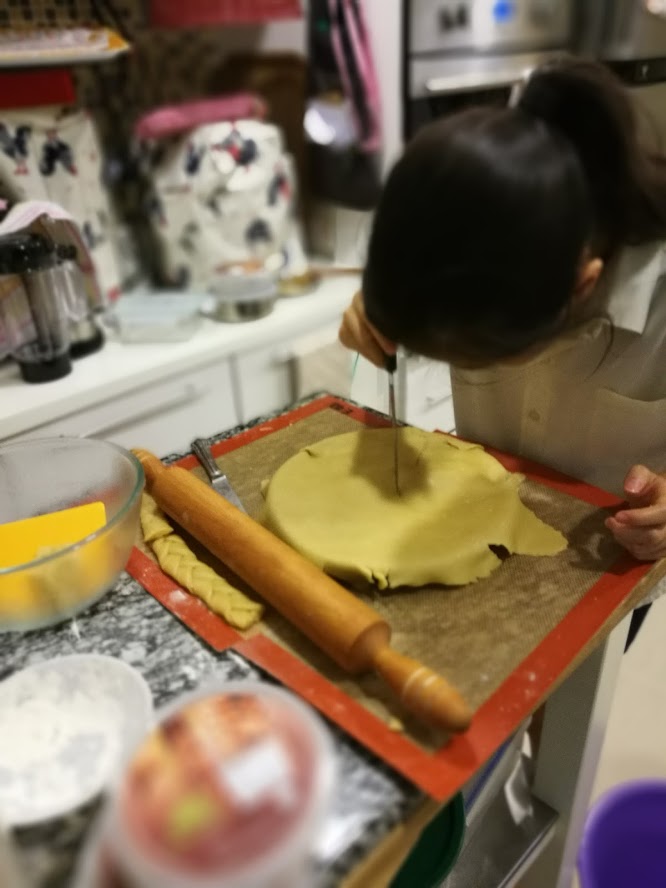 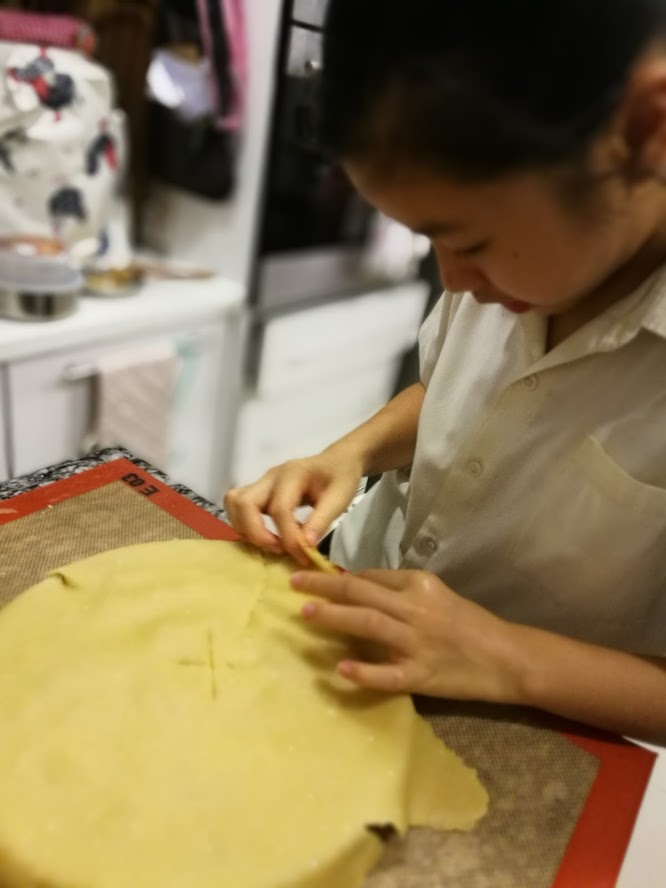 When I came home with Cass, I cooked the pie filling, which is minced pork with tomatoes, julienned carrots, Bunashimeiji mushrooms and lots of chopped onions and garlic. I seasoned it with some leftover Baba’s rendang powder mix, some dried thyme, dried basil, ground black pepper and organic shoyu.

The ‘chaplang’ fried minced meat which turned out to be really delish. 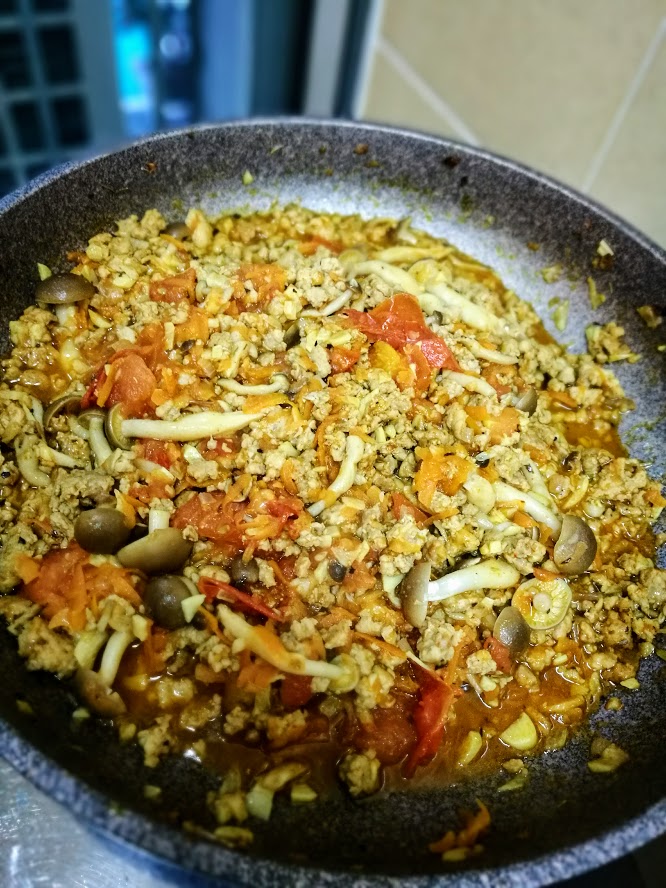 Drama Queen putting the final touches on the pie with egg wash before it goes into the oven to be baked for 40 minutes at 180C. 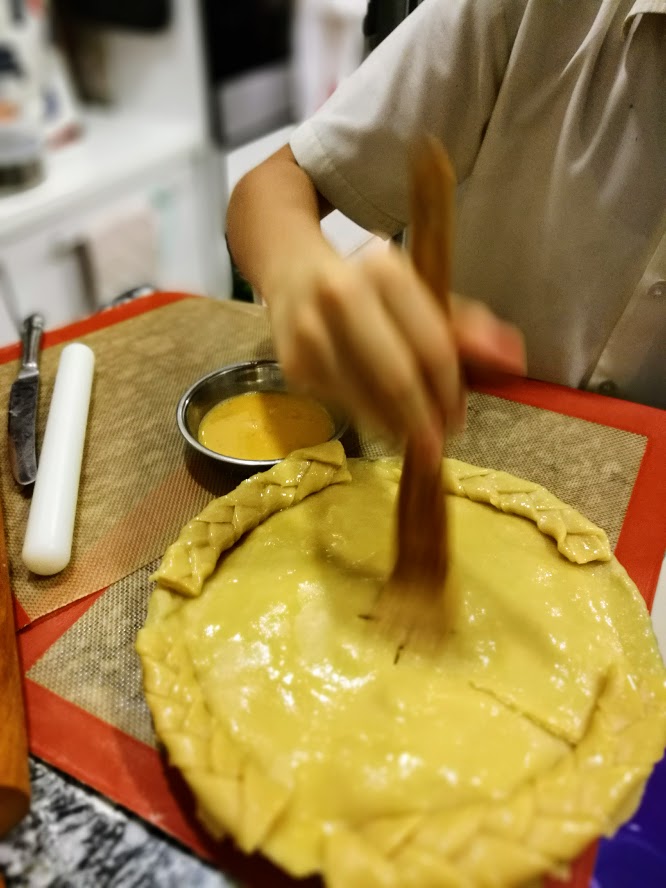 Fresh out of the oven and baked to a tee! 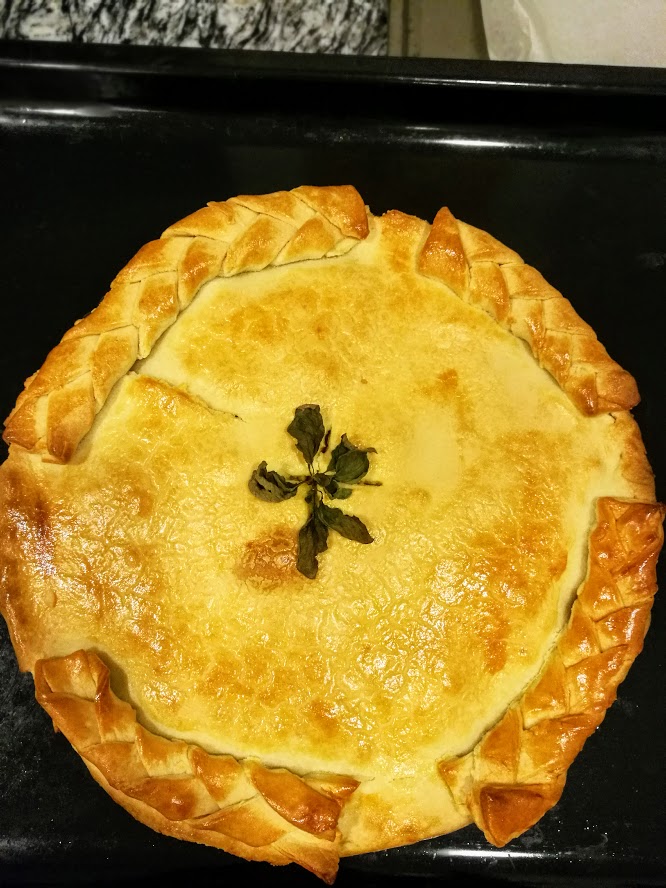 After the pie was all done and all of us savouring the yummylicious pie, Drama Queen told me that she ‘simply tembak’ with the measurements of some ingredients and replaced several ingredients with what she could find in our kitchen and fridge. I am still amazed with how the pie could turn out so well despite her not following the recipes strictly.  Cass commented that her 2che’s pie tastes better than those from some expensive cafes. 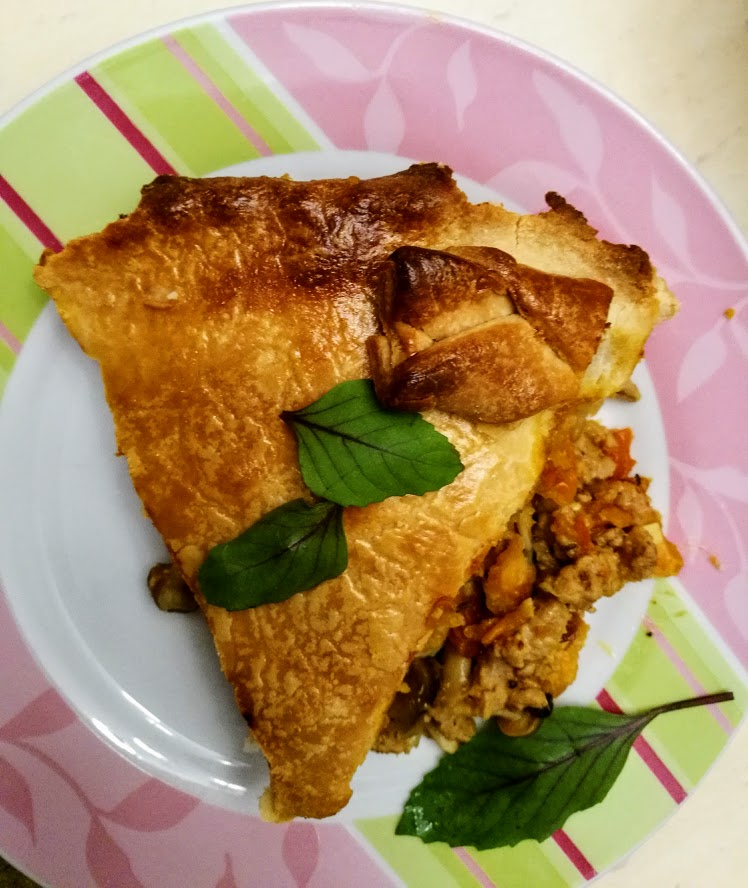 By observing intently each time both her grandmas bake, Drama Queen has picked up basic skills needed to execute simple baking. She’s pretty good with baking cakes and now she has learned how to bake a savoury pie. 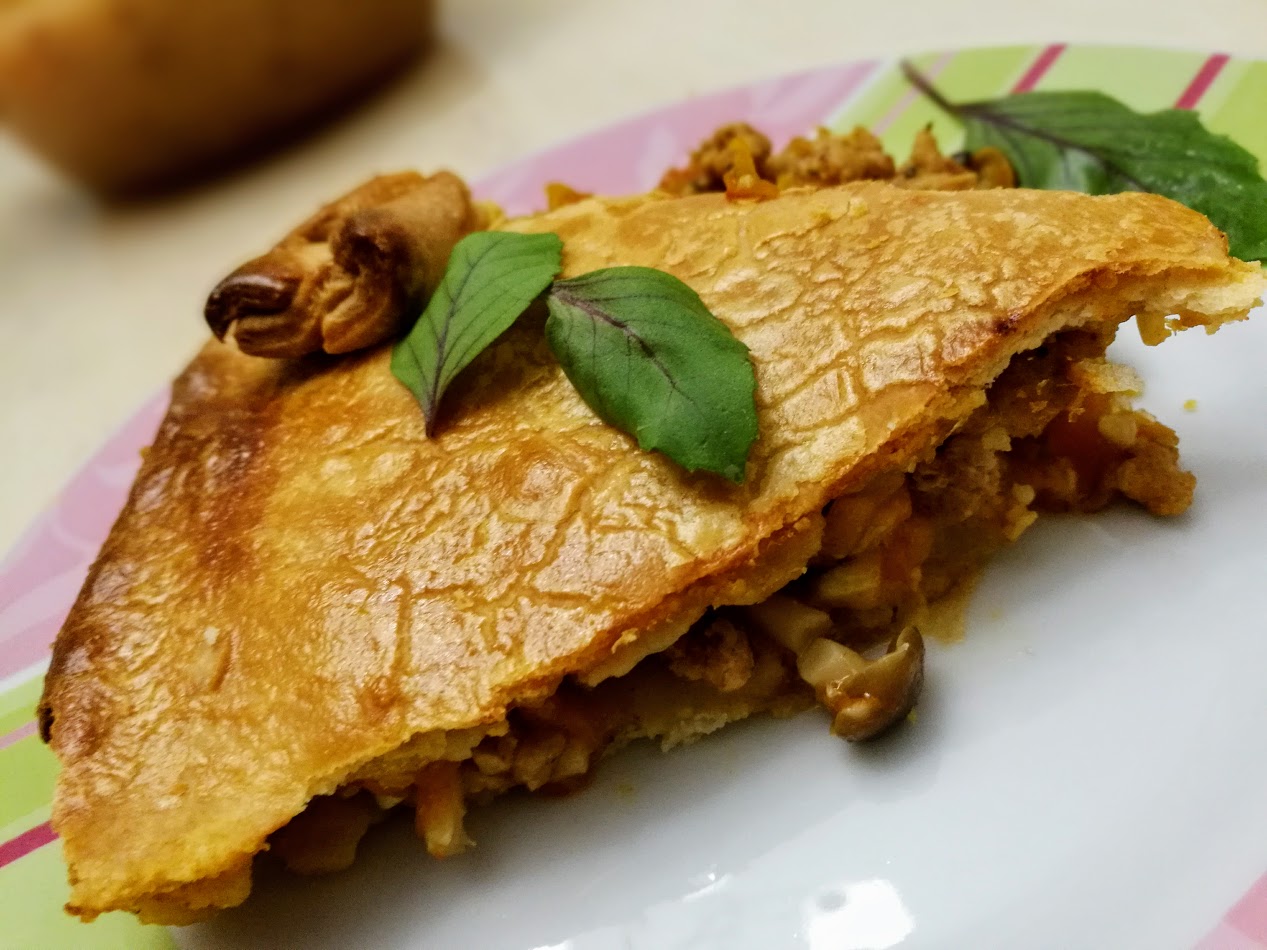 Drama Queen and Cass loved the pie so much that we skipped having breakfast of pork noodles at our regular Saturday coffee shop this morning. Instead we noshed down the delicious leftover pie.

Alycia, if you are reading this post now from Penang, take heart that we have kept a slice of pie for you in the freezer!  Can’t wait for you to come home to savour it 😉