Lunch today was just me with Drama Queen and Cass.  Alycia accompanied her grandma to Sunway Medical Center (SYMC) for a medical check up. As a reward for accompanying grandma, she got a treat of Starbucks sandwiches and coffee for breakfast and McD burger for lunch from grandma!  The girls love going to SYMC because of Starbucks, free WiFi and the hotel-like atmosphere. During my surgery at SYMC in May last year, the girls had Starbucks coffee, sandwiches and cakes for 2 days straight. I think they really enjoyed themselves at the hospital while accompanying me! They had a time of their lives camping at the comfy couch at the hospital concierge the whole day while hooked to their phones and iPad and sipping on Starbucks coffee.

We had lunch at one of our favorite neighborhood cafes today just so we could enjoy the air cond. I don’t mind paying a little more to enjoy my lunch to avoid getting sweat-drenched clothes and rushing off my meal.  It’s the hottest time of the year now and I try not to be out in the afternoon. Thus I run all my errands and have brunch before 11 a.m. to avoid  the hot afternoon sun later. 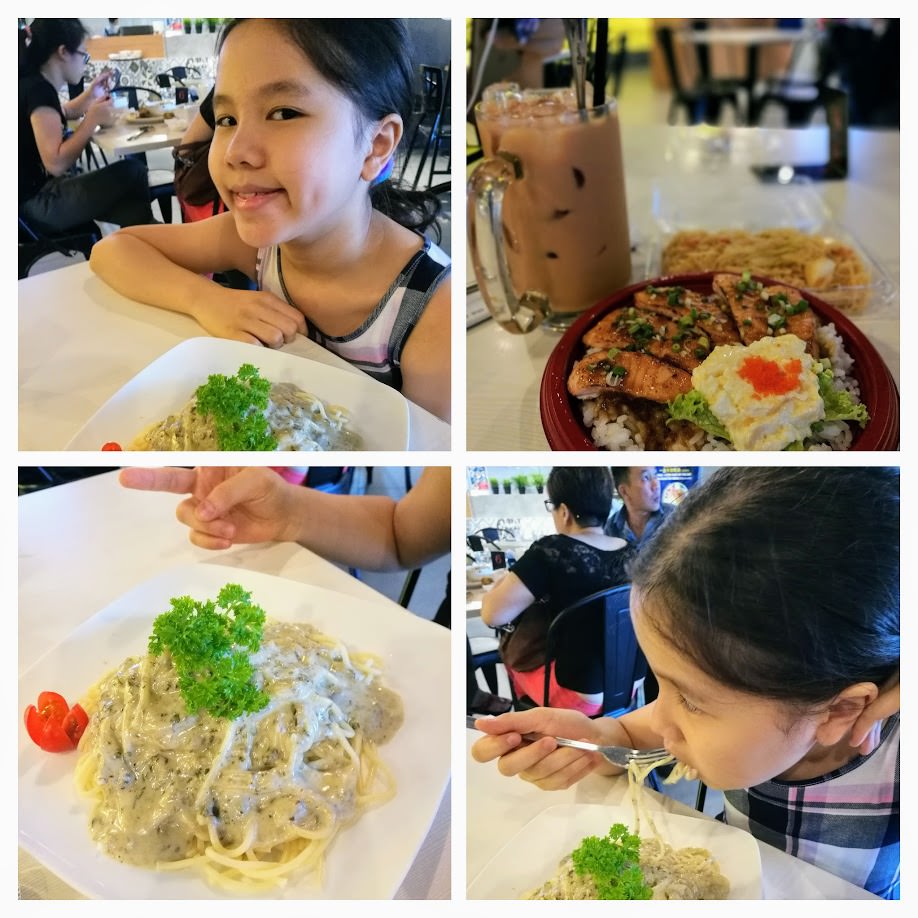 Typical scene while waiting for food to arrive ~ one was hooked to her phone and the other to her novel. 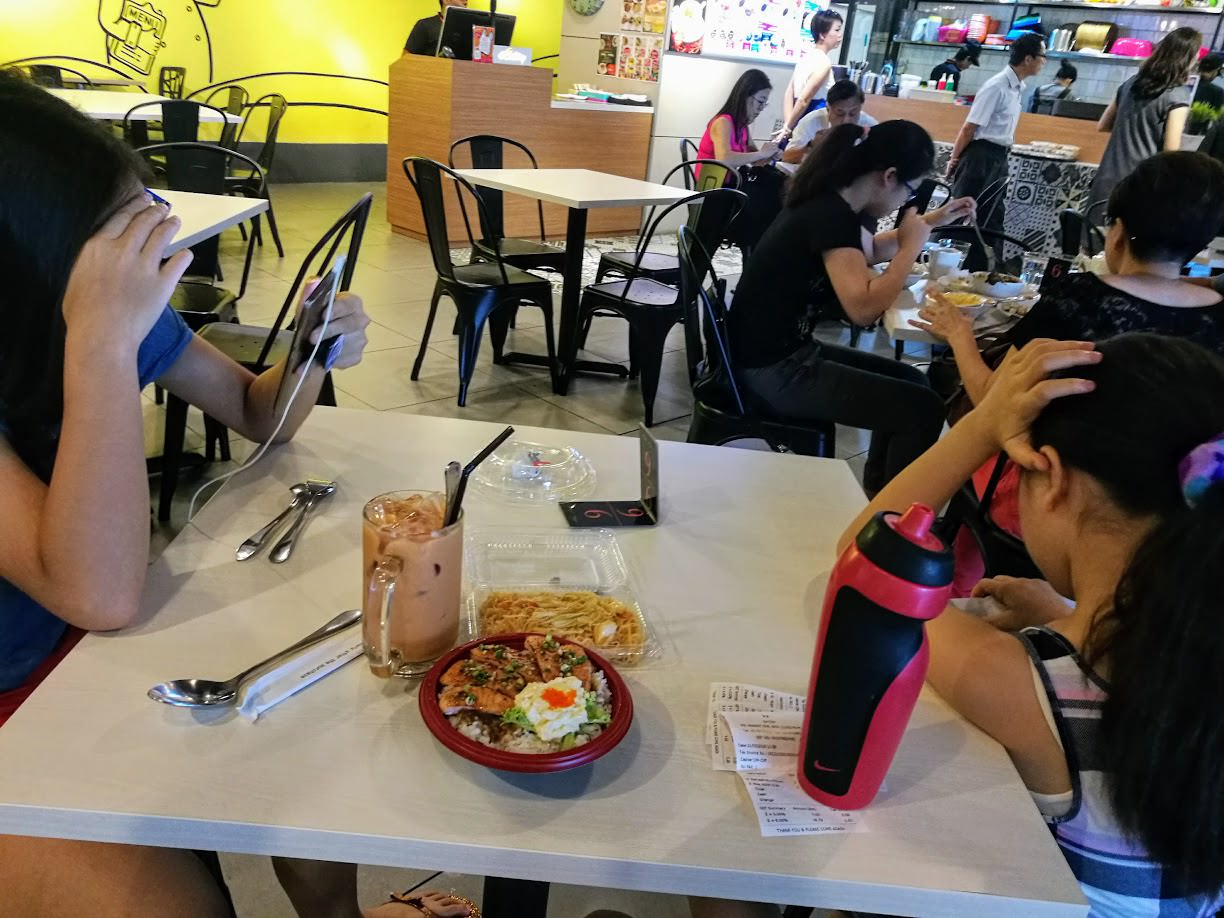 I summoned the girls to the kitchen to help with prepping the Japanese potato salad.  The littlest one was very earnest in helping, the middle child was a tad reluctant this time but helped out anyway (dare say no? Then don’t touch the food later!) and the oldest always finds an excuse to avoid the kitchen like the plague as she’s got royal fingers 🙄.  Her excuse today is she had to go to the gym after being cooped up in the hospital for half a day doing nothing.

With two helpers doing all the tedious chores from washing to peeling, chopping, mashing and mixing, our insanely delish Japanese potato salad was ready in under half an hour! 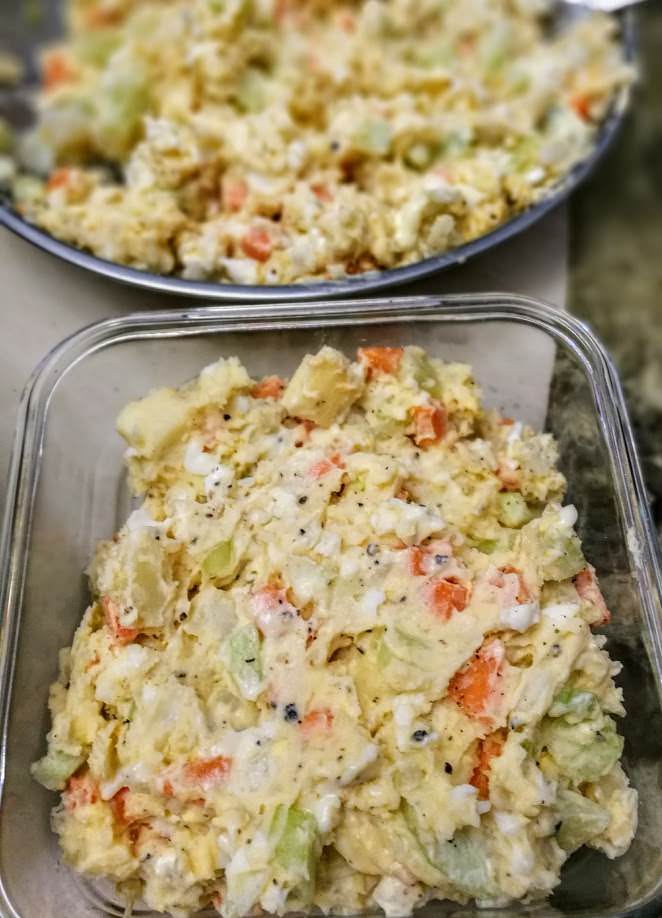 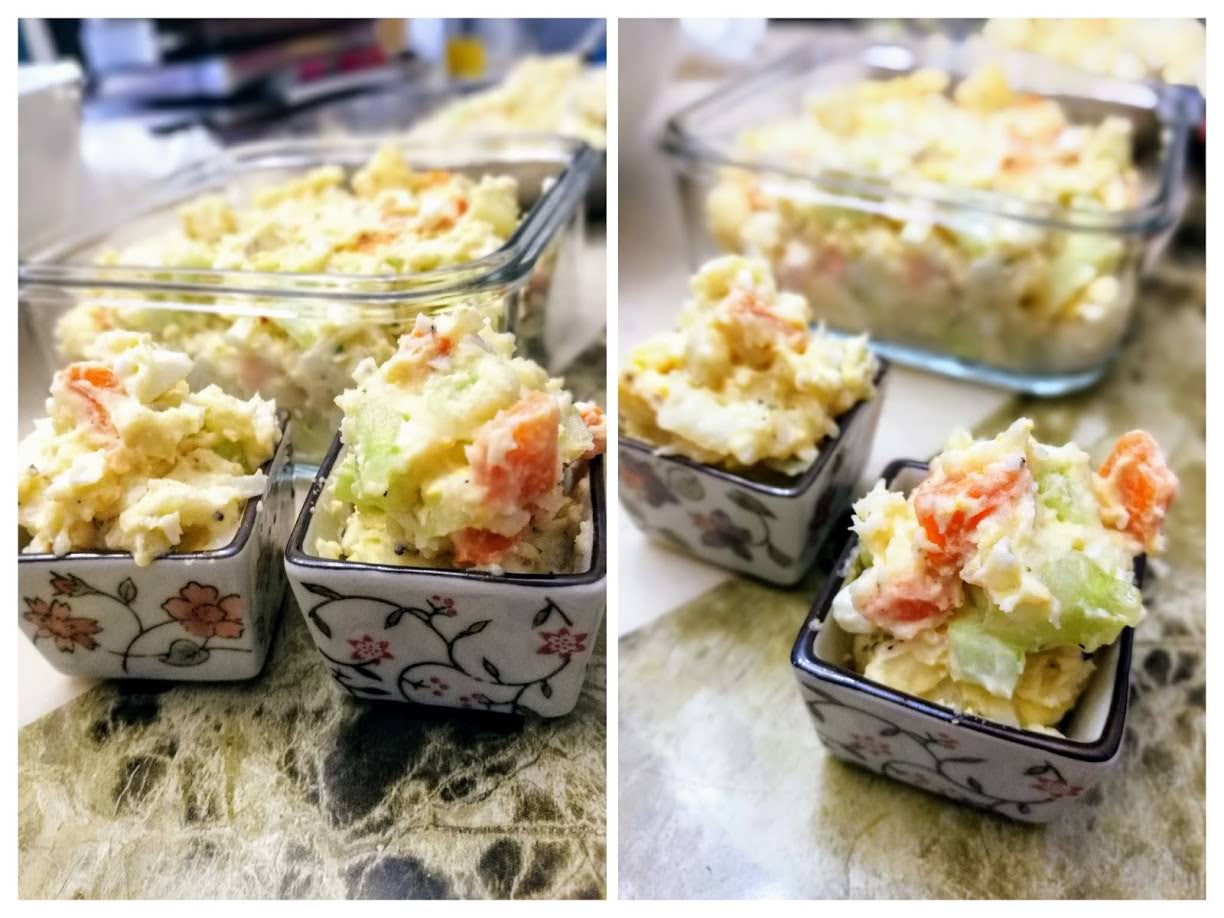 This Japanese potato salad is quick and easy to prep and off-the-charts delicious.  I love eating spuds this way.  The crunchy raw carrot, cucumber, onion and apple make it a little healthier while giving you the fiber and rawsome goodness. You can even add in finely chopped raw cabbage and it goes well with this salad. And you get the protein from the hard boiled eggs. I could have this alone as a meal and it fills me up pretty quickly. We made a big portion today and the girls can have it again for breakfast tomorrow before we head to the mall.  This is a brilliant back pocket recipe for appetizer for a party.  Serve the potato salad in dainty Japanese appetizer bowls and you’ll sure to impress your guests.

Instructions
Chop potato into cubes and steam until soft.
Boil eggs. I cooked the potatoes and eggs in the same wok.
Chop the carrot, cucumber, apple and onion into small cubes.
Mash the potato and hard boiled eggs in a large bowl.
Squeeze in the plain mayo and wasabi mayo. You can use just the plain mayo if you don’t like the taste of wasabi.
Add ground black pepper and salt to taste.
Add in the chopped carrots, cucumber, apples and onion into the mashed potato + egg and mix everything up well.
Keep in fridge if you prefer it chilled before serving.