For the past few mornings, I’ve been bumping into a putu mayam seller at the news stand.  Each time I see him on his bike, I’d have the urge to get a few pieces of putu mayam from him. It’s been coon’s age since I last ate putu mayam and I miss it.   It’s one of my favorite Malaysian desserts.  But it’s a high caloric and high carb food. Wolfing down one piece of putu mayam would mean dumping back all the calories that I had burnt in my morning’s 40-minute exercise. But what the heck!  Life is short and treat this as a cheat day treat, hey? 😉

Today I finally bought 3 pieces at 60 sen a piece.  I wonder how this seller earns a living selling  putu mayam at 60 sen a piece. Even if he earns a 50% profit, it’s only 30 sen profit per piece.  He can’t even earn a Ringgit of profit from my purchase of 3 pieces.  How can he possibly survive in KL with his meager earnings?   I think I’m going to buy 10 pieces from him the next time and give them away as treat to the friendly guards at our condo. 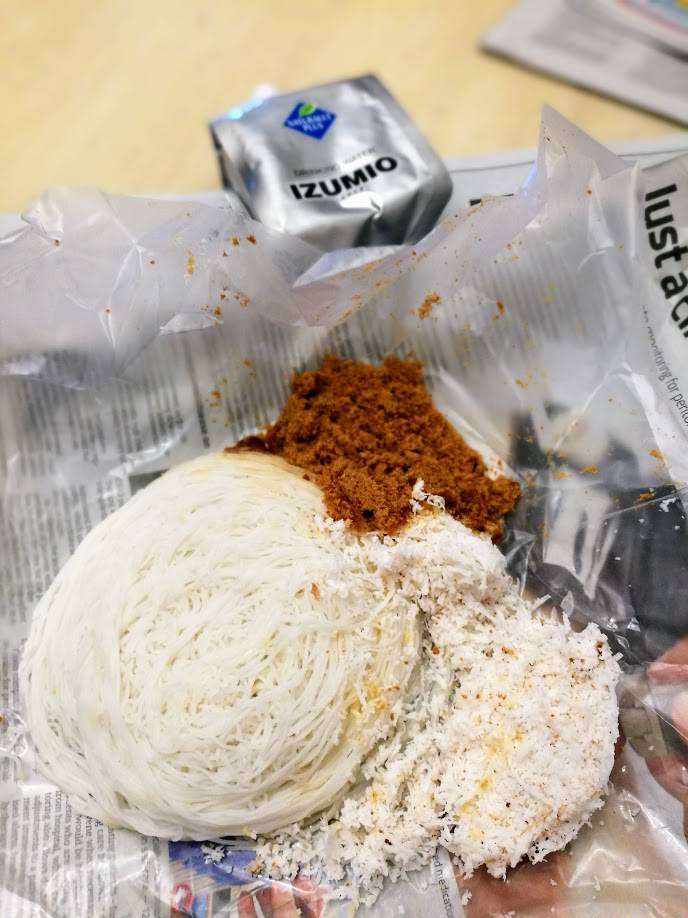 Good ‘ol putu mayam wrapped with plastic and newspapers.  It’s a dessert made up of all my favorite things ~ fresh and aromatic grated young coconut (I could live on this alone!), gula Melaka (palm sugar) and rice flour noodles (very similar to mee hoon). This is such an awesome combo albeit it looks plain and eaten cold.  Another yummy version of this dessert is ‘Putu Piring’, which is composed of the same ingredients but steamed in bamboo cups or a stainless steel steamer.

After my breakkie of a piece of putu mayam, I dropped Drama Queen at the tuition center, then brought Alycia to the clinic. She’s down with food poisoning (possibly from an overdose of some wrinkled month-old mini Mandarin oranges) and had been purging and vomiting since 2 a.m.   I could have just self treated her at home with charcoal pills and Izumio. But at the high school that she goes to, absence from school without an MC would mean 0.2 points deducted from each subject. And a few points lost may render her being kicked to lower ranking classes, something that petrifies her.

After  Drama Queen’s class ended, we went for a short retail therapy at Mid Valley Megamall! 😆  We had lunch at Nana’s Green Tea, which is the girl’s favorite restaurant just because  of the macha latte, which is her absolute favorite drink.  Nana’s Green Tea serves one of the best macha latte, much more better than Star Bucks *in our opinion* and according to Drama Queen, better than the ones she tried in Hong Kong. 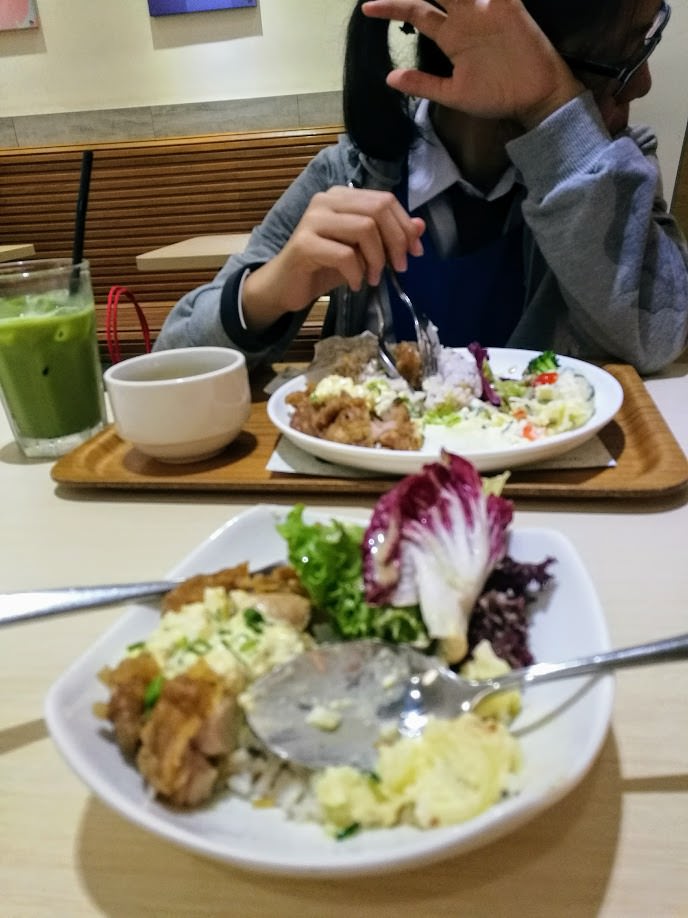 Drama Queen giving me the Dab to avoid being photographed

Despite a short retail therapy at the mall in the rush hours of the morning, I managed to drop off Drama Queen pretty early in school. I then went to the bakery to get some buns for the girls before going home, got some work done on the computer before Cass returned from school. Thank God Alycia got better by noon and needn’t have to pop the pills that the doctor prescribed her with. My approach is always to wait and see if it’s not life threatening and where there’s no fever.

2 thoughts on “My Monday Morning”