I can’t remember when was the last time I watched a movie at the cinema. I think it was Avengers a few years back. And I slept half the time in the cinema. I always snooze off partway during the movie, especially if the movie is a fantasy movie or a cartoon. Movies like Star Wars, Harry Potter, Avengers, BumbleBee ALWAYS lull me to sleep! I remember sleeping through the Harry Potter movie many yonks back 😴

On Tuesday I brought the girls and the mil to the mall for a movie marathon. After lunch, the 2 older girls and the mil watched the cartoon Ralph Breaks The Internet: Wreck It, while I went shopping with Cass. I joined them to watch Guang later. 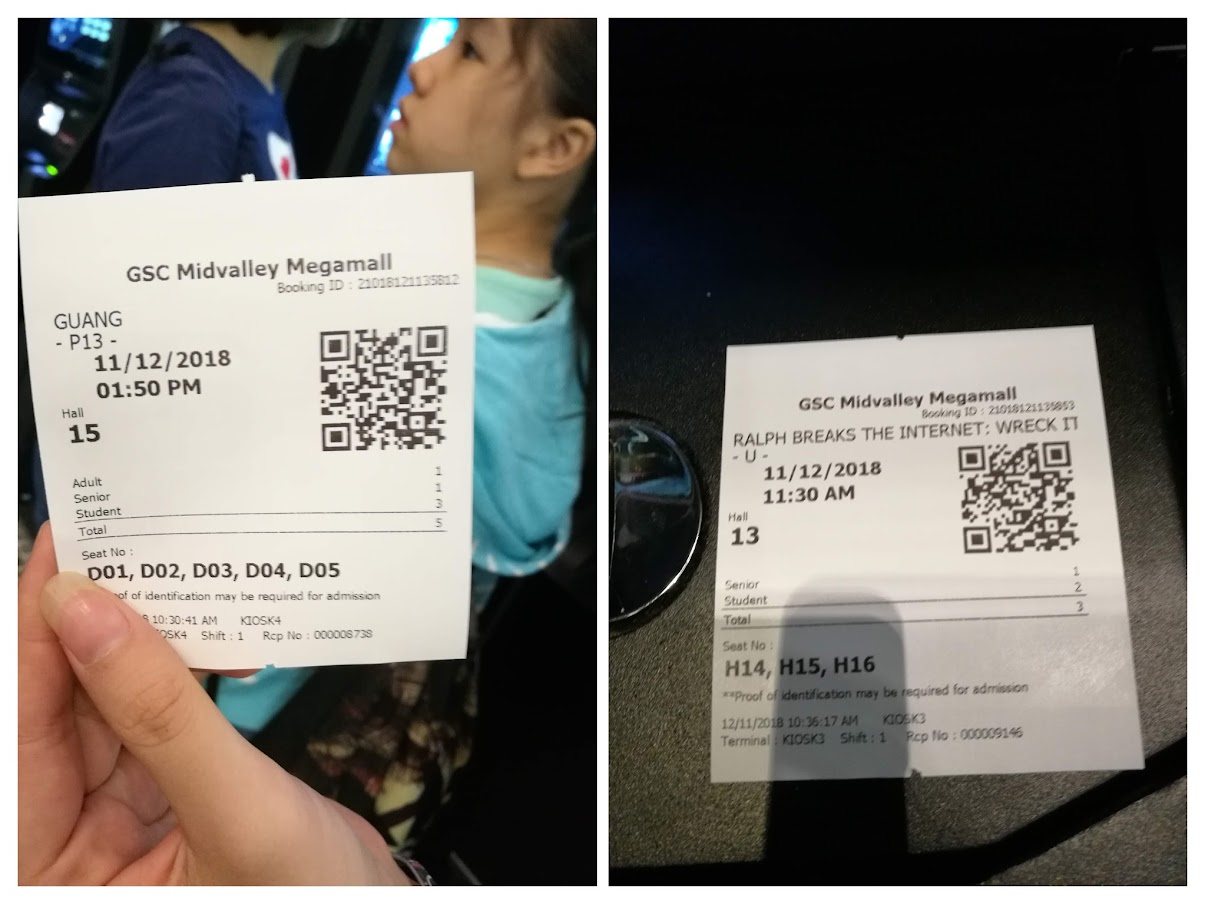 I did not even know that movie tickets are now bought from e-Kiosks stationed outside the cinema.

And instead of having tickets printed out, only two receipts are printed out from the e-Kiosk, no matter the quantity of tickets bought. At the entrance of the cinema, one of the receipts with the bar code will be scanned.

I am really living in the dinosaur age!  What do you expect from a middle-aged aunty who has no interest in movies, right? 😆

Guang is perhaps the only movie that I’d watched in a decade that managed to make me stay awake from start to the very end.

Guang tells the story of Wen Guang, a young man who struggles with autism. His brother keeps coercing him to find a job so that they can share family expenses, and he does go looking but it’s an extremely difficult process fraught with a lot of stumbling blocks. Unknown to anyone, Wen Guang who has perfect pitch, has a gift for music. The film is loosely based on the real life director’s brother who is autistic and is musically gifted.

Be warned that this movie is a real tear-jerker, so do bring lots of tissue papers.  Some scenes are hilarious though. Guang is an excellent movie with an excellent cast.

Guang is a well-crafted debut that goes beyond the telling of the intimate struggles of a familial relationship. The plot presents a platform that questions on the issue of the treatment towards people of different abilities especially in the working environment and further mirrors the society’s approach on the matter.

Our girls loved it, especially Cass, who says that she does not mind watching it again. We are all hoping that a sequel will be in the making soon to tell how well Guang is doing at his new job at a piano shop and whether his loving younger didi will be in a relationship with Sue Ann, the kind-hearted kindergarten teacher at a special needs school.

Here’s another activity for your kids this school holidays. Go watch Guang with your kids and support our local film industry. HFM says you’ll love this movie as much as she does! ☺️

When it comes to toddlers, nature usually wins over nurture. How so? Some children are born a little clinger than others, whereas some children are rambunctious and fiercely independent. Whatever the case may be for your own cutie, there are significant benefits to allowing your kiddo to play independently.

Sure, you can start out with half-an-hour, but encourage those 30-minute intervals to become several hours of independent playtime throughout the day. Why? Because independence is something your children need and there’s no better time to allow them teach themselves how to fight through being bored.

Independent Play Encourages an Active, Engaged Imagination
When your child plays independently, they have to rely on themselves to come up with something fun and engaging to play. Giving them a room full of wooden toys, puzzles, and books, or simply sending them outside to the fenced-in backyard, encourages them to engage their active imaginations.

Tip: You could even encourage active imagination with an indoor infant toddler swing. They’re supervised, of course, but they can bounce and play without relying on you for entertainment.

Independent Play Teaches Children How to Combat Boredom on Their Own
This is the era of instant gratification. Everything is literally at your fingertips at all times, but boredom can be a great learning tool. When children are faced with boredom, they come up with new and interesting ways to pass the time.

Note: Independent play encourages children to find hobbies, passions, and things that interest them. For example—you could provide crafty things, like paints and glitter. Let your youngster have the run of craft tables. This is where their imaginations thrive.

Independent Play Eliminates Heavy Reliance on Others, like Parents, for Constant Entertainment
While attachment parenting can be an awesome tool in its own right, children shouldn’t need their parents, or anyone else, for constant entertainment. Independent play shows them that they can have fun and do things for themselves, regardless of who is around.

Tip: If your kiddo is constantly underfoot or scared of playing alone, set a timer for 15 minutes and tell them that their task is to play independently until the timer goes off. It might take a few tries over the course of weeks, but kids usually discover how much they love simply using their imaginations to play by themselves.