Last night, baby’s hand looked puffy and swollen again. Our doctor had to come to the hospital at 10:30pm to re-insert the IV line AGAIN. Poor baby has a dozen holes in her hands now. She’s just one of those babies whose skin is very sensitive to needles. It could also be the plaster and bandage tied round her hand that’s causing the puffiness.

When we went back to our room from the treatment room, Baby C was shivering…. and that scared the sh*it out of me. I was so afraid she would turn blue… thank God she didn’t, though her skin looked a tad mottled. I quickly wrapped her with a blankie and put on socks on her feet. The nurse took her temperature… it was 37.7 degrees Celsius.   Twenty minutes later, her temperature shot up to 38.9 degrees Celsius. Though she was shivering, my maid and I coaxed her with much difficulty to eat her Motillium meds (to move her guts forward). Later, the nurse gave her a suppository and a cold pack for her body. I sponged her body the whole night. Thank God her fever subsided several hours later. I doubt all the suppositories that had been inserted into her rectum had any effect in bringing her temperature down coz the suppositories always came out together with her stools… a few hours later or a few days later! The nurses knew about this and had informed the pharmacy to write to the manufacturer of the suppository.

The good news is that Baby C hasn’t vomited since yesterday. She has also been pooping lots and has lots of wind irritating her tummy and causing her much distress. This is caused by the medication that’s supposed to move her guts forward.   Since she hasn’t thrown up since yesterday, our surgeon and the chief pediatrician gave me the green light to breastfeed her. The chief ped told me that breast milk is really therapeutic and it’s the best food for baby now. I am praying hard that my baby will not vomit the breast milk out later. Gosh, I tell you, my sweetie-pie was really enjoying her mek mek and she was really upset when I had to pull her away. 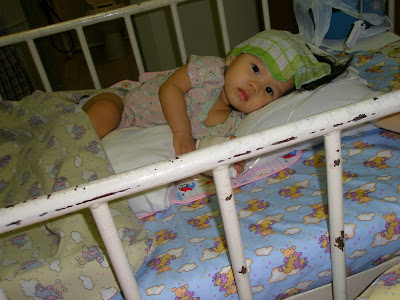 This pic was taken 2 days ago when Baby C had high fever. She was really weak and listless. I hope she will regain her strength and zeal today after getting in some power breast milk this morningl

31 thoughts on “Baby C’s Finally Got Her Mek Mek”