Hubby had a harrowing car accident yesterday evening. He was at Kerinchi Link when his car skidded on an oily road. He was only driving at 60km/hr and if he had gone faster, I shudder to think of the consequences. He sprained his shoulders and fingers though. Either a vehicle leaked oil or some heartless people with the evil intention of making money from accidents had poured oil on the road. When his MPV skidded, it obviously spun and all he could do to prevent the car from tipping or careening was to manouevre the steering wheel like an F1 driver, while his car swerved and grazed the divider like a bumper car. I can imagine how scary that near-death experience was coz I had experienced it twice – once when the hubs and I were traveling back to Ipoh on the highway during a very heavy downpour. Our car skidded, spun round and nearly crashed onto the divider. Thank God we were saved and our car did not crash onto the front car and there was no vehicle behind us. The second time – I had just found out I was pregnant with #2 and was deep in my thoughts while driving to work. As I was going down a curvy slope on the Kesas highway, my car skidded, spun 360 degrees and it nearly hit the divider too and thank God once again, my car and I were spared from damage and harm. I thank God that the hubs was spared from harm or something more tragic in yesterday’s accident.   And thank God my kids and I were not in the car with him.

His car is now in the workshop and will be stuck there for 3 weeks. The estimated cost of repair is a few thousand Ringgit.  The front bumper is totally wrecked, some electronic items inside the front of the car were also damaged and the back bumper has to be replaced too. 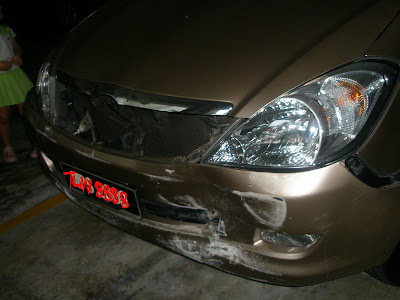