After 3 nights 4 days, Cass is finally ‘discharged’ from the hospital!

Since Friday last week, I felt like I have been in a bad dream. My day would start very early (even on weekends). I had to complete some chores before leaving the house at 9 am for the hospital for Cass’ 1st antibiotic jab via IV.  We would then spend between an hour to 8 hours in the hospital.  If we are lucky, the morning jab would take just an hour, inclusive of talking to the doctor. If not, we would have to wait at the hospital until 4pm for the 2nd jab.  On Day 2, Cass had to do an ultrasound scan and urine test. Day 3 was another urine test. Getting pee from Cass was frustrating yesterday as she was in a very foul mood. And her foul mood made me feel really foul too.   She didn’t want to wet any part of her body but the protocol for urine collection is that her down under must be cleaned up first.  I got so pissed that I gave her a good piece of my mind that I had been bottling up and finally managed to unleash it on her.

Going through all these procedures with Cass brought back bitter memories of the time when I had to collect Cass’ pee when she was a baby over 6 years ago. Those days were much worst than now. Collecting pee from a sick baby is a tall order and can take years away from your life!  And I had to do that every single month, several times in each month during each UTI attack, sometimes several times in a day!  Gawd, how did I even survive those dark days??

Night jab is 11ish pm. By the time we reach home, it’d be way past midnight already. Next day, I would be up at 4:45am to get ready Alycia and Sherilyn for school. I’ve skipped swimming since Friday as I have no more energy left for exercise.

My parents from Ipoh and brother and family from Singapore were in KL over the weekend to celebrate my parent’s wedding anniversary. But I was in zilch mood for any celebration. I was worried of Cass and now I am still worried – of the rejected hospital bill by our insurance company totalling RM5,000! Hopefully our appeal with a fresh letter from Cass’ doctor will be approved this time. 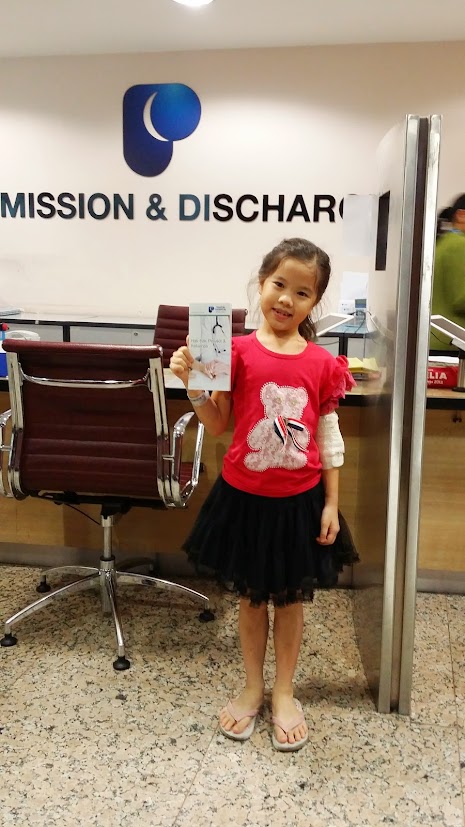 Cass was uber happy today, despite spending 5 hours in the hospital as the IV line is finally taken off. The IV line has been causing her so much discomfort and pain since last Friday.

On a more positive note, I am very thankful that despite getting a UTI attack with bad flank side and bladder pain, Cass was still very much active, had no loss of appetite and was not nauseous.  Her fever was very well managed with Izumio hydrogen water, which I gave her lots since last week. I  have been pumping myself with extra packets of Izumio as well.  Because of the stress and lack of sleep, I got bitten by the flu bug from the hubby! The flu started this morning with non-stop sneezing but by 9pm, the runny nose and sneezing stopped!  I can’t believe how fast I got myself healed from flu this time!! Once again, Izumio has not failed me. I am so happy! 🙂

4 thoughts on “Cass Is Discharged From The Hospital”