In the morning, we set off to Lamma Island.  We took a bus to the city, then took an MTR to the harbour.

Below – While waiting for the ferry to arrive, the kids played ‘hot potato’ ball game at the quay. And the kids on the ferry on our ride to Lamma Island.

Upon arrival at Lamma Island, the kids were famished. We bought fish balls for them to munch while we walked around the island to hunt for a restaurant to have lunch.

Below – We had lunch at Andy’s Seafood. I wonder if this restaurant belongs to Andy Lau? Haha..

This lunch consisting of simple dishes cost us a whopping RM500+ for 6 adults and 6 kids!  But it’s by the beach and it’s a holiday resort, thus the justification for the price I guess.

Below – at one of the piers at Lamma Island, after lunch.  The kids, their uncle Dick and aunt Sarah were in awe, watching a man fishing. He had a bountiful loot in his basket!

Below – after lunch, we had to take a half-hour stroll to the beach. There were several groups of tourists on single wheel electric scooters traipsing the island.

We saw this cute doggy on our walk to the beach…

After a long and breezy walk, we reached the beautiful beach.  Walking along the island village reminded me of my camping days at Lumut and Pangkor Island about 30 years ago, when I was in my early teens.

Below – the kids playing at the beautiful beach of Lamma Island.

Whilst the kids played at the beach, I sat under the tree and enjoyed my bowl of ‘tau foo far’ which is a specialty at Lamma Island. We saw many tourists queuing up to buy the ‘tau foo far’ at a small stall along the way to the beach…

We left Lamma Island at 5ish pm. By the time we reached Disneyland, it was 7ish pm.  Only Cass, my eldest SIL and I went to Disneyland. We took the MTR from IFC Mall to Disneyland. The rest of the kids commented that Disneyland is too kiddish for them. Plus the rest of the kids had been to Disneyland several times.   I thought Disneyland would be too boring and kiddish for me too initially, but when I was inside, I didn’t want to leave. It was so magical there!! I loved the ending where there was a fireworks display, a parade of all the Disney characters and lastly, the release of fake snow for a good 15-20 minutes.  All my favorite childhood characters came to life and with this visit, my childhood dream of visiting Disneyland has been realized 🙂

Below – the MTR to Disneyland is Disney themed. The railings, handles, windows, etc are decorated with Disney characters. 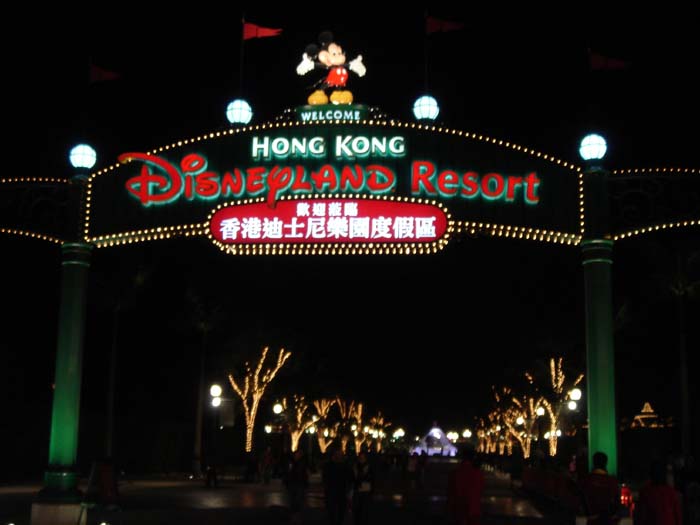 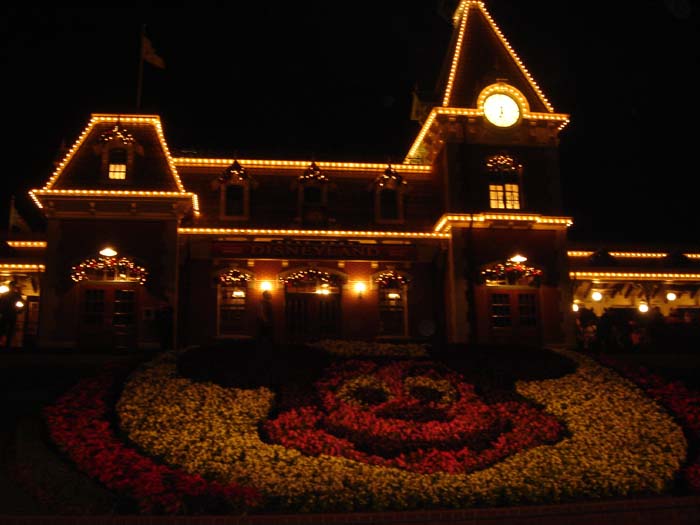 I wanted to snap many pictures but it was pretty quite dim inside Disneyland. Plus my phone camera does not work well at night and in under dim conditions.

We watched the kick-ass fireworks display but could not capture the pictures on my phone camera. I did not want to spend my time fidgeting with my phone and miss watching the fireworks.

The Hong Kong Disneyland fireworks and night parade pictures below were taken from flickr.com. Yup, they were this awesome, complete with blasting Disney music. It was very surreal.  When the fireworks display was over, fake snow was released. 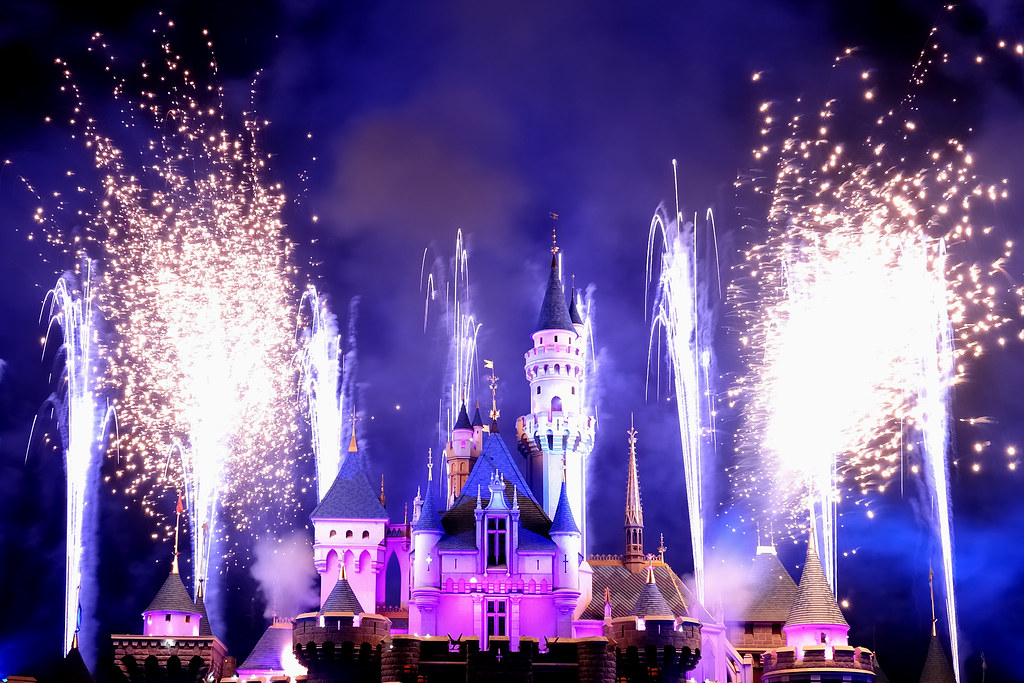 We only had our dinner at 9:30pm after the fireworks display and snow fall were over.  We were never that hungry before and had never taken a dinner this late!

Above – check out Cass’ Disney themed dinner. So enticing and very tasty too.

Below – my vegetarian lasagna, which was delish too. Perhaps we were so hungry that all the food tasted superb to us, haha!

After our dinner, we took the MTR back to IFC Mall, by which time my eldest bil was already waiting for us to fetch us home. It was close to midnight by the time we reached our hotel.

Alycia and Sherilyn are very lucky girls indeed. Aged 5 and 4 respectively, they had already visited Disneyland and had traveled to Hong Kong twice. What about daddy and mummy? Aged almost 40 years old, we have never been to Disneyland. I’ve always wanted to visit Disneyland ever since I started watching Disney cartoons and movies many moons ago but just never got the opportunity and right time to visit Disneyland. When Alycia came back from Hong Kong, she told me that her koo mar will bring her to Disneyland again in December this year to celebrate her birthday. I don’t know if she’s making up a story or it’s indeed true that my sil had told her this. If it’s true, Alycia and Sherilyn are indeed very very lucky kids. This time, I hope daddy and I can join them in their trip to Hong Kong, together with Baby C. 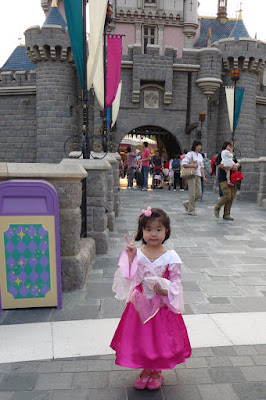 See my princess wannabe here? That’s the princess dress that my sil bought for her in Disneyland. It’s such a pretty dress and there are even built-in cancan wires underneath the dress so that when it’s worn, the wearer would look every bit like a princess! What’s missing is perhaps a Twinkle necklace to complete it. Sherilyn has been telling me that she wants to wear her Princess Aurora dress to attend my birthday dinner this weekend. But I still think that she would look a tad like a fish out of water in that elaborate dress. But oh well, I’ll just let her have fun in that princess dress because if she doesn’t wear it now, I’m afraid she will outgrow the dress very soon.

Alycia and Sherilyn don’t seem to miss daddy, mummy or baby at all, not at all.  They are having a time of their lives in Disneyland Hong Kong. When the hubs and I called them yesterday evening and also this morning, my princess wannabe was regaling us with her adventures in Disneyland non-stop. As for Alycia, she was reluctant to talk to us and when she did, she didn’t talk much but only gave such excuses like “I am hungry, I want to eat dinner, bye bye” and “don’t talk too long, it’s very expensive, bye bye”!! Sei moh, maybe she’s even thinking that we are just 2 boring old folks who are checking on her!  I can now picture myself 15 years down the road calling her when she’s left her nest, studying abroad o_o!

Anyway, when I came back from my 1-night stay at Hilton Sentral and checked my email, I had a pleasant surprise awaiting me. My sil had sent me pix of my 2 princesses enjoying themselves in Disneyland: 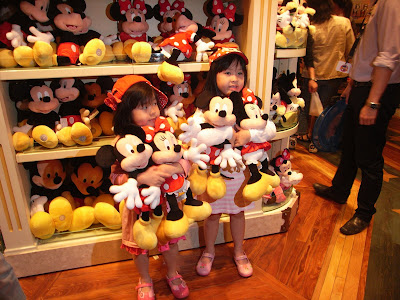 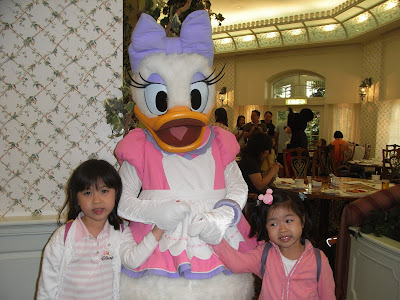 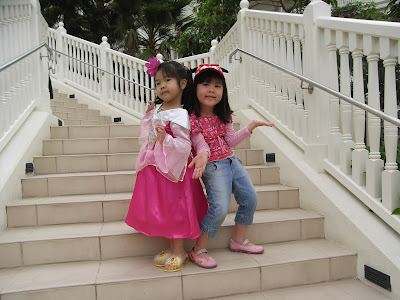 Characters clearly displayed – a princess wannabe all dressed up like a princess and a pretty tomboy posing like a tomboy!