I had lunch today all alone.  It’s CoCo day in school for Drama Queen and Cass; Alycia only got back at 4pm and the mil had just flown off to Hawaii.  I hadn’t planned what to eat for lunch and the thought of take out food from the regular stalls did not appeal to me at all.

After getting some groceries from 99 Speedmart, I walked across to the roadside Indian stall to see what they have to offer. I always notice many patrons tucking into the food, under the hot sun, shielded only by a piece of plastic cover above.  Such an unassuming stall yet could attract such a crowd. The food must be good and cheap.

I took a piece of mackerel fish curry and a piece of chicken curry. That’s enough for me for I have a very small tummy with modest appetite.  Back home, I sliced up a cool kyuri and ate the curry that I bought with it together with some jackfruit. 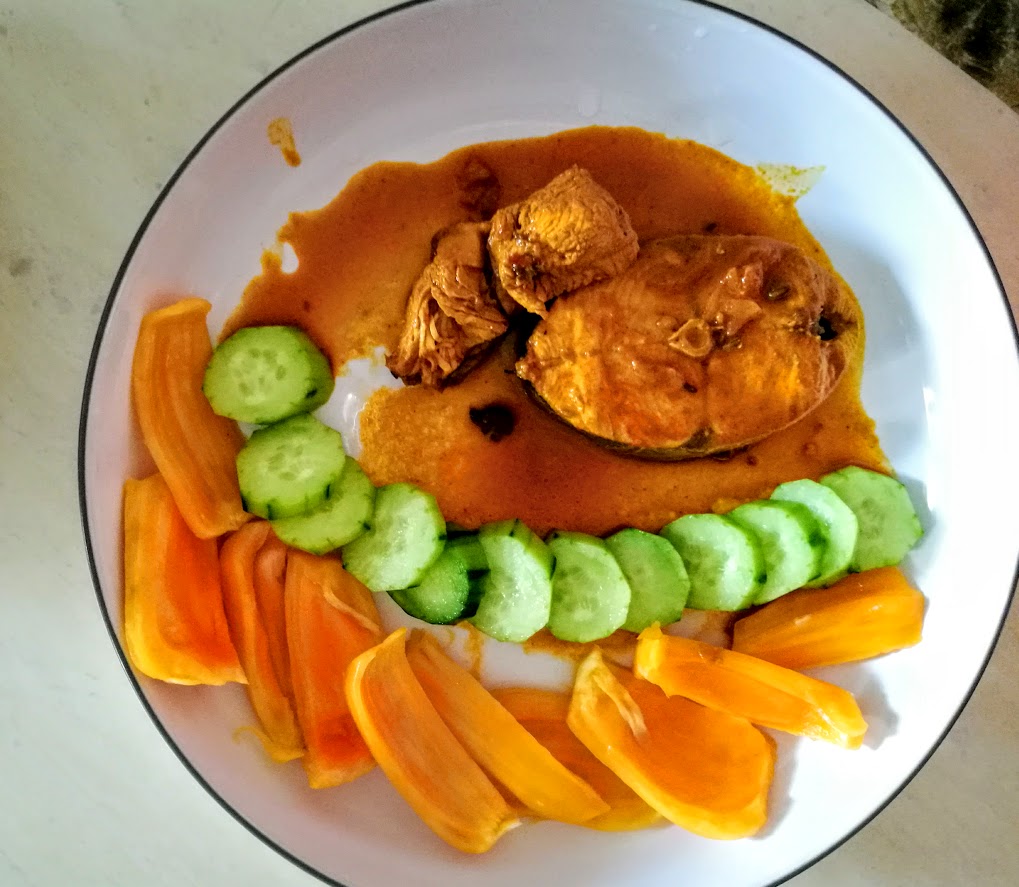 My RM7 lunch – the fish and chicken curry cost RM4, cool kyuri RM1 and jackfruit is about RM2.  Light and easy. Low in carbs and high in protein. Definitely my kind of lunch.

Jackfruit, known as the jack of all fruits is a rich source of vitamin, minerals, phytonutrients, carbohydrate, electrolytes, fiber, fat and protein. This fruit has no cholesterol or saturated fats.

Once or twice a week, the hubs and I will steal some time from our busy schedule to have breakfast together, when the girls are in school.  We tend to communicate better without the kids ka-ka-cau-cau (disturbing) and distracting our train of thoughts 😀

Yesterday, I fetched the hubs from his office and then sent my car to the Indian fellas at the alley to have a wash and vacuum.  It’s our weekly routine to do that – send our cars for wash and then have breakfast at a nearby cafe or coffee shop. Our favorite is this Indian restaurant that whips up really good nasi Briyani and rotis.

I will usually order my favorite tosai rawa but yesterday, I had quite a bit of mil’s delish homemade scones for breakfast, thus didn’t order tosai rawa.  Hubs was as hungry as a wolf who hadn’t eaten for days. He ordered a huge plate of nasi Briyani piled high up with mutton curry, two Bull’s Eyes eggs, chicken curry, a big piece of fried chicken (not in picture as he wolfed it down in a jiffy!) big head bean sprouts and spinach.  I walloped the spinach and pecked on his nasi Briyani.  The plate of curried rice and meat were DIVINE! If only I had a metabolism that drudges super fast even without working out so hard 5x a week, I really wouldn’t mind whacking these babies 2-3 times in a week!  I love Indian food.

Looking at this picture makes my tummy growl now.  I am now thinking of packing nasi Briyani and tosai rawa for lunch tomorrow. 😛  I know Drama Queen and Cass will second my decision. Thanks to the hydrogen infused water and carotenoids supplements that we drink and pop daily, we no longer get heaty easily after having curry or heaty food 🙂

Yesterday I sent my car for a wash. To kill time, I had brunch at an Indian restaurant – alone. Bliss! 😀

It’s been a while since I last tucked into some yummy Indian food. I love Indian cuisine and so do our girls.  But we cannot be digging into Indian food as often as we would love to as it is high in carbs, calories, cholesterol and ‘heaty’.  Cass has to go easy on spicy food as it can stimulate her bladder.  Plus spicy food is acidic, which is not good for people prone to getting UTIs.  I gave her lots of cool sliced cucumbers, green capsicums, barley water and Izumio to neutralize the acidity.

Here’s what I chowed down –

Half a portion of Indian style fried vermicelli,  with lots of thick yummy dhall curry and a glass of teh C tarik kurang manis (reduced sweetness). 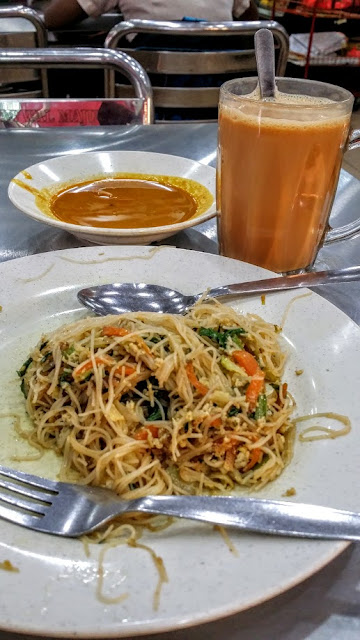 The girls thoroughly enjoyed their high caloric lunch and licked the platter clean.  I kid you not, that was just what Cass did. She licked her plate clean.  The forbidden food always tastes so good, don’t they? 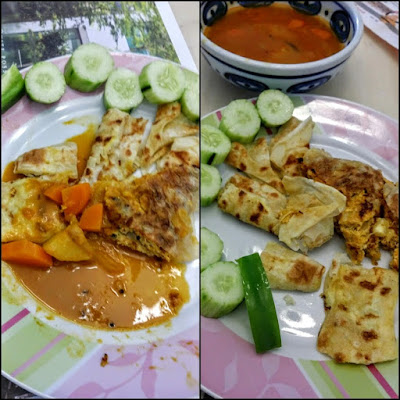 Total cost of our lunch was only RM12.  Aha, another plus point for eating Indian food!  Just make sure you stay away from all the meats (which don’t come cheap) and the bill will be kind to your wallet.  We thoroughly enjoyed our delish spicy Indian lunch and can’t wait for the next round.

About 2 months back, after our lunch of chicken rice and chicken noodles at a famous stall located along Jalan San Peng, we walked over to Tiger Jit’s Capati to have a look at their fare. I was impressed with their curry dishes and capati.  Though I was already really stuffed with the chicken rice and noodles, I was drooling looking at the sumptuous curries. I picked a few curry dishes and several pieces of capati bread for takeout.

When we got home, I asked the girls to bring the takeout to the kitchen. But what do we know?!!  After searching the entire house and car thoroughly, we found out that we had left the capati and curries at the stall, BUMMER! I was really disappointed! And angry with myself and the girls.

Moral of the story – never ever assume… for you make an ass out of U and ME!  I assumed that the girls / MIL were holding the takeout and they assumed that I was holding it. Good lesson learned!

While I was waiting for the takeout, I saw from Tiger Jit’s stall that he was on Facebook! I quickly sent a private message to Tiger Jit and informed him that I left my food at his stall and asked him if I could go back to his stall when I am free to claim my food.  I didn’t really expect that he would reply my message but he did! And he was kind enough to ask me to claim my takeout at any time.

Way to go Tiger! You have an unassuming, no-frills and simple stall but you keep yourself up to date and well LIKED on Facebook!

But we had too many events and kids’ exams rolling in over the next few days, weeks and before we knew it, it was already 2 months. Today, hubs was in a mood to bring us there for brunch. I told our girls and hubs that I would try my luck to claim my capati and curries!

After brunch of chicken noodles and Penang char koay teow at neighboring stalls (which were as good as Ipoh and Penang ones), I walked over to Tiger Jit’s stall. I could not see Tiger Jit at his stall but his Indon helpers were there. I told them about the takeout that I left behind and expected that they would pretend to forget all about the incident. But they remembered!  They even remembered what I ordered and without hesitation, quickly packed the food that I had ordered 2 months back. This is what I call good customer service!

We only ate the capati and tosei rawa about 3 hours later. Lazy me didn’t even bother to heat it up in the toaster. But they were still soft and fluffy.  We whacked all the rotis and curries and were so satisfied, BUUUURP!

If you’re looking for a homely place to dig into some really delicious curries, capati and tosei, I strongly recommend Tiger Jit’s at Jln San Peng. Many VIPs patronize his stall. Check out his Facebook page.

We will definitely be back at Tiger Jit’s to try other curries. I love their capati and roti rawa. I can’t wait to patronize his stall again!

My 2 older girls love Indian food and anything that is spicy. However we don’t always eat spicy food for fear of ‘heatiness’. My 2 girls have inherited their daddy’s DNA; they get throat infections and ‘heatiness’ very easily. They were worse when they were younger. Now that they are a little grown up and their immune system a tad stronger, they don’t fall sick every month anymore *knock on wood*!

Anyway, last week after running some errands, we went to Sri Neela’s for brunch. My girls, including Baby enjoyed their roti meals very much, and so did moi!

Deep fried chicken drumstick  and deep fried super crunchy bitter gourd – love them. I have always love Indian deep fried chicken, albeit they can be pretty expensive. See the glass of cucumber shake there?  It’s really refreshing and great way to expel the ‘heatiness’ from eating Indian food. If you go to Sri Neela’s, you should try their cucumber shake (no sugar but with a pinch of salt).

This tosei cheese is really tasty. I can whack the whole tosei with cheese all by myself.

My cucumber juice (different from cucumber shake) and teh C tarik with no sugar.

Alycia and Sherilyn gulping down their ice lemon tea with double straws.

Baby enjoying roti tisu. It was her first time eating roti tisu and she whacked almost the whole crispy roti by herself! 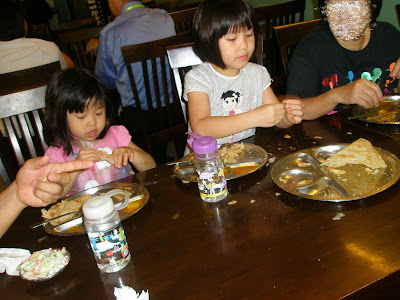 It’s all in the genes. Mummy, daddy, granny, koong koong and mah mah all love Indian food. So does Alycia and she did not even complain that it’s spicy when she ate them. She can even drink the curry gravy by the spoonfuls!

We had roti canai, roti pisang (roti canai with banana), tosei and roti canai tisu last week. The gals loved them, especially the roti canai tisu… which the gals called it party hat. Have you eaten and seen a roti canai tisu or a tosei tisu before?  They look pretty appetizing and attractive and taste good too.  Hope on to my other blog to view pictures of them.

Last Saturday, DH brought us for an unplanned lunch at Saffron Restaurant, a restaurant that specializes in North Indian cuisine located at Sri Hartamas. The food are all home-cooked, using loads of spices and are very tasty, even my fussy food critic hubby enjoyed the food. Here’s what we ate : Bhoona Gosht – mutton braised in a highly spiced gravy of tomatoes, onions and herbs. The mutton was tender and the gravy was very flavourful. Thick dhall with lots of herbs and chick peas. We had a dessert of home-made almond ice-cream and durian ice-cream but I find the ice-cream a tad too sweet for me.

Overall, the food was good and the bill came up to RM103.