Kaya (meaning rich in Malay) jam is my absolute favorite. My girls’ too. We only like my dad’s homemade pandan kaya and no other. Just like its moniker, kaya is rich in eggs, santan (coconut milk) and sugar. Kaya jams sold commercially are too cloy for our liking as they are all loaded with sugar, preservative and food additives.  Once you’ve tasted homemade kaya, you wouldn’t want to buy store-bought ones.

Since my parents won’t be coming to visit us any time soon as they will be on a cruise from Taiwan to Japan next month, I figured I better get my arse moving and make some kaya for us until we get my dad’s pandan kaya supply in a few months’ time.  Alycia is gaga over kaya toast. She can eat it every single day and even orders it when we are at our regular coffee shop. She loves those kaya on white toast sold at Chinese coffee shops, which I don’t fancy coz white bread has almost zero nutrients. And have you seen how much margarine they slab on the toast? Gawd, I can almost feel my arteries clog looking at the amount of margarine.

So yesterday I bought a small packet of fresh santan from my regular supplier. Unplanned. I bought it since he had one last packet left (he does not always sell santan) and I thought that if I had no time to make kaya, I’ll just drink it neat!  I love santan and all the edible parts of the coconut.

When Drama Queen was back from school, after lunch and after her shower, we only had 45 minutes to spare before the Mandarin tutor arrived. She volunteered to cook the kaya. I said NO but she kept assuring me that we would have enough time. She always has a positive mindset.

It’s very easy to make smooth and creamy kaya IF only you know the tricks. Also get ready to have a good workout on your hands as you will be standing at the stove stirring continuously.

For the basic kaya, all you need are eggs, fresh santan (coconut milk) and sugar. You can add pandan juice if you wish. As we only had 45 minutes to do and did it in such a rush, I could only use pandan leaves, knotted and thrown into the pot with the 3 ingredients.  My dad uses fresh pandan juice. 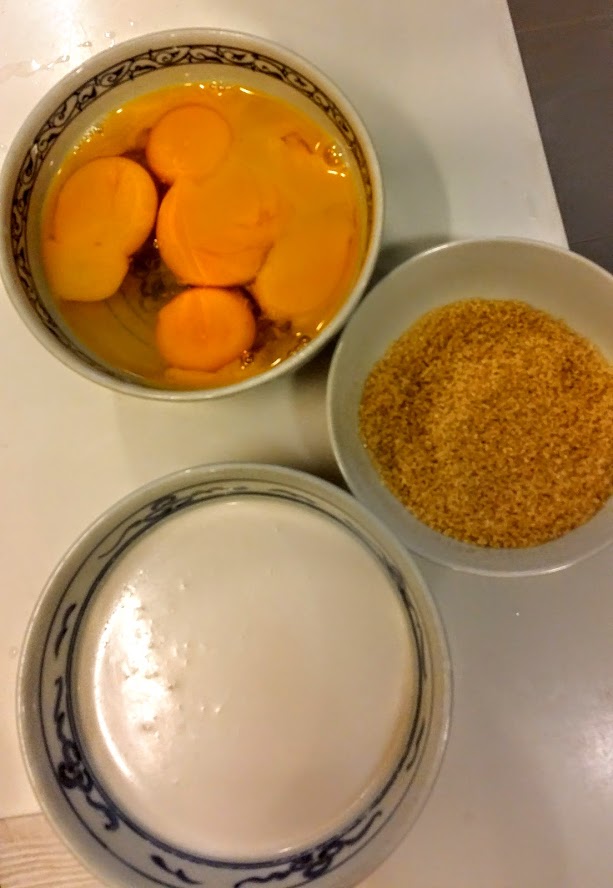 Measurement – same volume for all 3 items but you can reduce the sugar. For eg, if you have 200ml of santan, your eggs and sugar have to be 200ml too. But the sugar can be reduced. We always reduce our sugar.

For my kaya yesterday, I used 1 small packet of santan (1 coconut), 4 eggs and about 3-4 tablespoons of organic brown sugar. Mix all the ingredients well with a whisk in a pot or bowl.

Whilst waiting for the water to boil in the wok, I cooked the mixture in a  smaller pot at medium – high heat on the stove.  Then transferred the smaller pot into the wok when the water started to boil.  Then I left the stirring to Drama Queen, UNSUPERVISED for about 20 minutes while I attended to Cass who was in the bathroom.

Below – initially the mixture still looked smooth and nice until…. 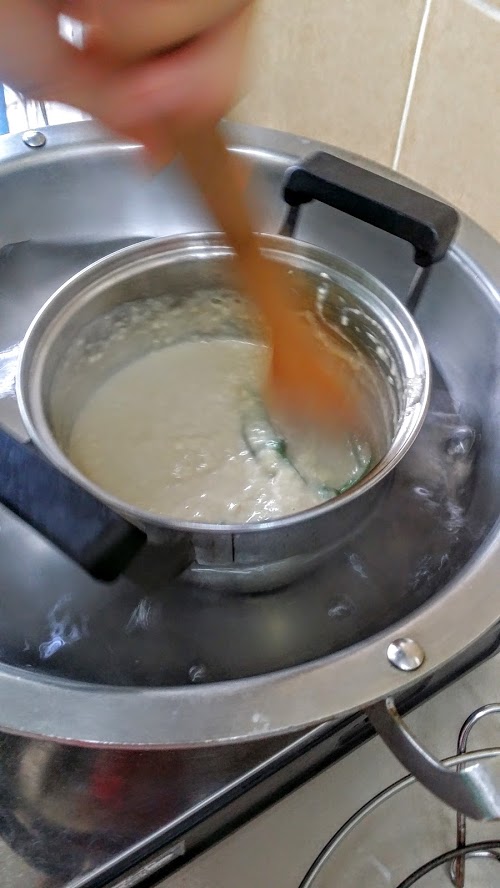 When I came back to the kitchen about 20 minutes later, I was shocked to see what the kaya had turned into!! FUDGE!! It had turned into kaya omelette!  Steamed kaya with minced meat! Such was the consistency. I was so disappointed. I couldn’t blame it all on Drama Queen as I had not given her specific instruction on how high / low the flame should be. She could have turned the flame to the highest point when she saw that the mixture wasn’t thickening like it should. But I wasn’t there to supervise her. My bad. 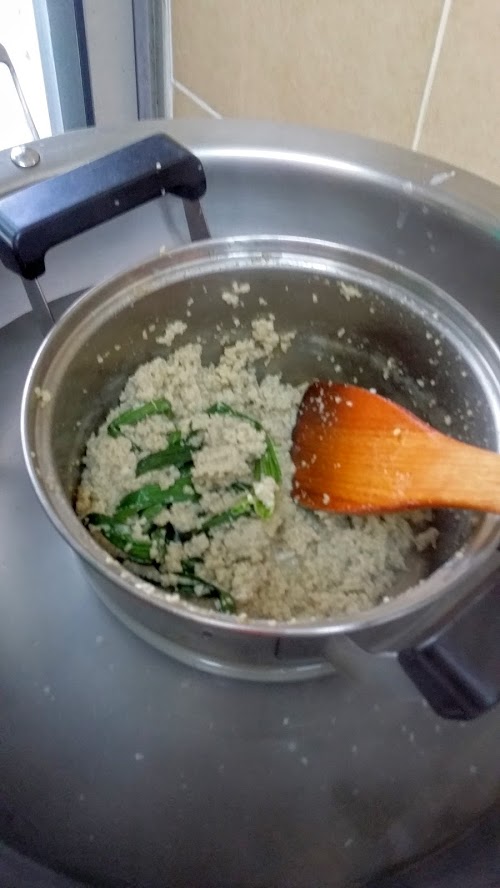 Lesson learnt –  never ever attempt to cook anything when in a rush and leave it to an 11-year old to help you take charge.

Drama Queen remarked dramatically when she saw the ‘kaya omelette’ —“Our kaya is an EPIC FAILURE!!”

I almost wanted to bin the kaya but after calling my mum to discuss on the ways to save the kaya, we came up with the idea of blending it.   Thank God for the blender, the kaya went through an aesthetic transformation and came out beautifully, as if it were cooked by a pro kaya maker! 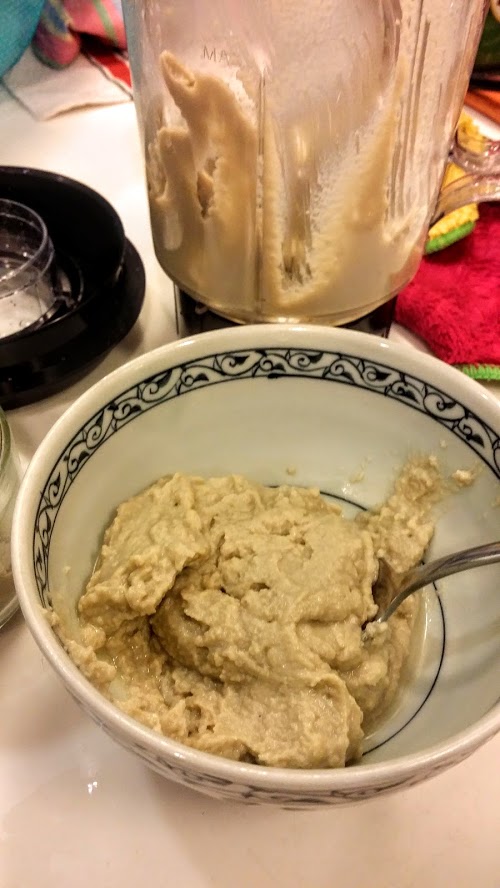 With just a few pulses in the blender, my pandan kaya had a major transformation. It tastes heavenly, smooth and so full bodied. 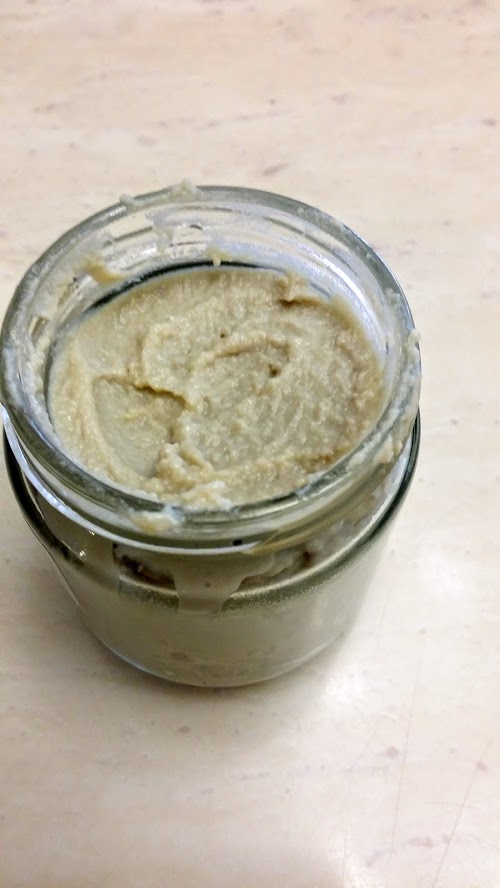 In under 45 minutes, we managed to make one bottle of yummy pandan kaya. I am glad that Drama Queen persuaded me to make the kaya despite having so little time on hand, helped to cook it and I took the effort to salvage it.  We will definitely be churning out more pandan kaya soon!

This is my third attempt in making kaya (coconut milk + egg jam) using the crockpot and this time, the texture has improved as I used my most helpful kitchen helper – the Shimono food processor to blend it after cooking the kaya in crockpot for 2 hours.

This is a sweat-free and easy-peasy way to cook wholesome and lip-smacking kaya.

All you need are eggs, coconut milk (santan) and sugar — all in equal amount.  For my recipe, I used 1 big soup bowl of coconut milk (from 2 coconuts), 1 bowl of free-range chicken eggs and 1/2 bowl of organic raw brown sugar.  1 bunch of pandan (screwpine leaves). Even with reduced sugar, my kaya was still sweet.

For time-pressed lazy mothers, you just dump everything into the slow cooker and stir every 15 minutes.  If you have the time, the pandan kaya will have a more attractive bright green hue as well as a stronger aroma of pandan leaves if you squeeze out the juice of pandan leaves into the kaya mixture when it is cooking in the pot.

Once you have tried your own homemade kaya cooked using only natural goodness, you wouldn’t ever want to buy commercially made ones that are super sweet and have food additives.

And below picture was my ‘East Meets West’ homecooked dinner yesterday…

I had intended to cook Terriyaki chicken fillet but when I opened the fridge to search, I then remembered that I had thrown the bottle of expired Terriyaki sauce a few months ago!  So I just whacked whatever marinate sauces I could find in the fridge and came up with this very tasty chicken dish marinated with Lea & Perrin sauce, Japanese Aba Ponzu citrus vinegar, soy sauce, black pepper, Maple syrup and organic agave nectar. The 2 ripened tomatoes and 2 huge onions added so much tanginess and flavor to the sauce.  Needless to say, the chicken dish was a hit with everyone, including the one that’s the hardest to please – the foodie hubs 😀

The MIL made some very delish marmalade jam last week.   She followed exactly what the recipe said but reduced the sugar.  However, when the marmalade jam cooled down, it thickened so much that it was crystalized!  Nonetheless, the half-jam half-molasses was very flavorful and lip-smacking. It tasted very much like the expensive imported orange flavored sweets with Vitamin C that I used to eat when I was a kid. As it was crystalized and hard, it also tasted a tad like the molasses sweet that I used to eat when I was a girl. But we cannot possibly finish off so much crystalized candies!   After ‘brain-storming’ with the mil, she came up with the idea of re-cooking the crystalized jam by adding the juice of one whole lemon to it.  After stirring the crystalized jam with lemon juice over low flame for about 10 minutes, voila, the jam was saved and tasted even better — less sweet and more sourish and now, it is in a perfect consistency, perfect for spreading on the bread!

I never thought it could be so easy. First I toasted the almonds and cashew nuts in my oven. Then, fished out the blender which I had not used for ages and dumped those nuts in. Drizzle in the extra virgin olive oil and sea salt and mix well. Just add oil until the consistency is not dry  and lumpy but smooth and can be easily applied on the bread. Adjust the salt to suit your taste. You can also add in some sugar if you want.

Now, I have homemade kaya cooked using slow cooker and homemade healthy nutty bread spread! I am so not going to buy sugar-laden jams anymore 🙂 Hmmm, I can even sell my jams in my online store haha! But seriously, I don’t think anyone will buy coz they are expensive. A medium sized jar of almond-cashew jam that I made cost almost RM30 as nuts are very expensive.

I never knew making homemade Pesto sauce can be so simple. The ingredients used are:

1) Toasted pine nuts
2) Fresh basil leaves (we bought a punnet from Jaya Jusco). You can also plant them in your garden, like my mum.
3) Parmesan cheese
4) A little sea salt
5) A little olive oil
6) Fresh garlic

Just toss everything into the blender to blend them into the desired consistency.


This is real GOOD stuff – hot Pesto sauce on a slice of hot carrot cake. The kids and I LOVE them. Even Baby loved it but I try not to let her eat too much as it is a tad salty.  You can have a healthier version of the Pesto sauce by omitting the sea salt and reducing the Parmesan cheese.

My mum, the great jam maker makes all types of jams and bread spreads. Some of her specialties are peanut butter, caramel kaya, pandan kaya, marmalade, mandarin orange jam, red dragon fruit jam, durian jam and pineapple jam. My favorite is her kaya and strawberry jam.

It’s SO easy peasy to make strawberry jam and other jams made from fruits. She just dumps all the strawberries into her Kenwood bread maker and let the maker take care of the stirring and boiling. 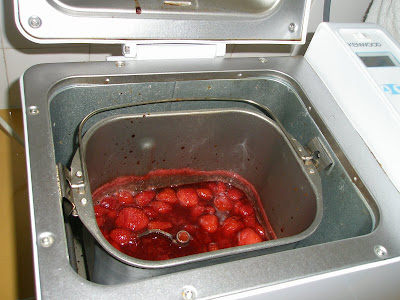 This is what she gets after a couple of hours: 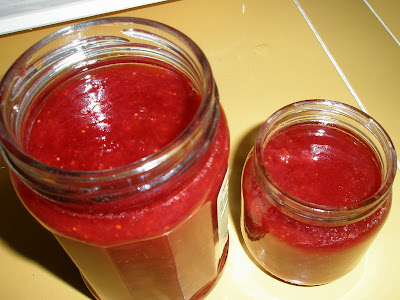