Cass has been drinking Izumio hydrogen water for 4 years.  I stopped drinking Izumio  last year for about half a year as I wanted to see if stopping it would mean a weaker immune system for myself.  And hell yes, I kept getting the sniffles and sore throat so frequently that I started to drink Izumio again recently. I also increased my Super Lutein dosage from 1 capsule to 3 to 4 capsules a day. So far, all has been well.  That’s all I can to say. I am a very taboo-ish person and won’t say too much of anything good about myself, lest the opposite happens! Can’t help it. I spent 17 years of my life growing up with my late maternal grandmother (who hailed from Guangdong, China) who had a lot of ‘pantang’ and taboos that even up till today, I still think that they exist and practise some of them! 🤫 🤭

I can write an entire post just on my late maternal grandmother’s ‘pantang larang’, I kid you not. Perhaps one day, I’ll just put down a post on it, in remembrance of my very much loved late por por.

Anyway, back to my Izumio and Super Lutein purchase!

If I could afford it, I would still have been drinking a few packets of Izumio a day. Same goes for my 3 girls. I can feel the difference in my health when I was drinking 2-3 packets of Izumio and popping 4-5 capsules of Super Lutein a day.  But now, only Cass gets to drink a packet everyday. The other 2 girls and I would only drink it as and when we feel a little under the weather. Cass had the most difficult babyhood, being exposed to a lot of radiation from a battery of scans since she was an infant and was on prophylactic antibiotics everyday of her life since she was 6 weeks old until around 16 months old. Thus, only Cass gets the privilege of drinking a packet of Izumio everyday to detox her body.

When I saw February’s promotion from Naturally Plus, I immediately signed up for a 12-month package.  What I’ll get in a usual 12-month package is 12 products plus 2 and sometimes 3 free products.  But for February 2019 promotion, we get 5 free products!  Now that’s more than RM1,000 saved!!

My friend was so efficient and sent the products to my door step the next day after I’d made payment! And he even gave me two tubs of CNY cookies.

All these should last me till end of this year and hopefully by then, Naturally Plus will have this free 5 products promotion once again. 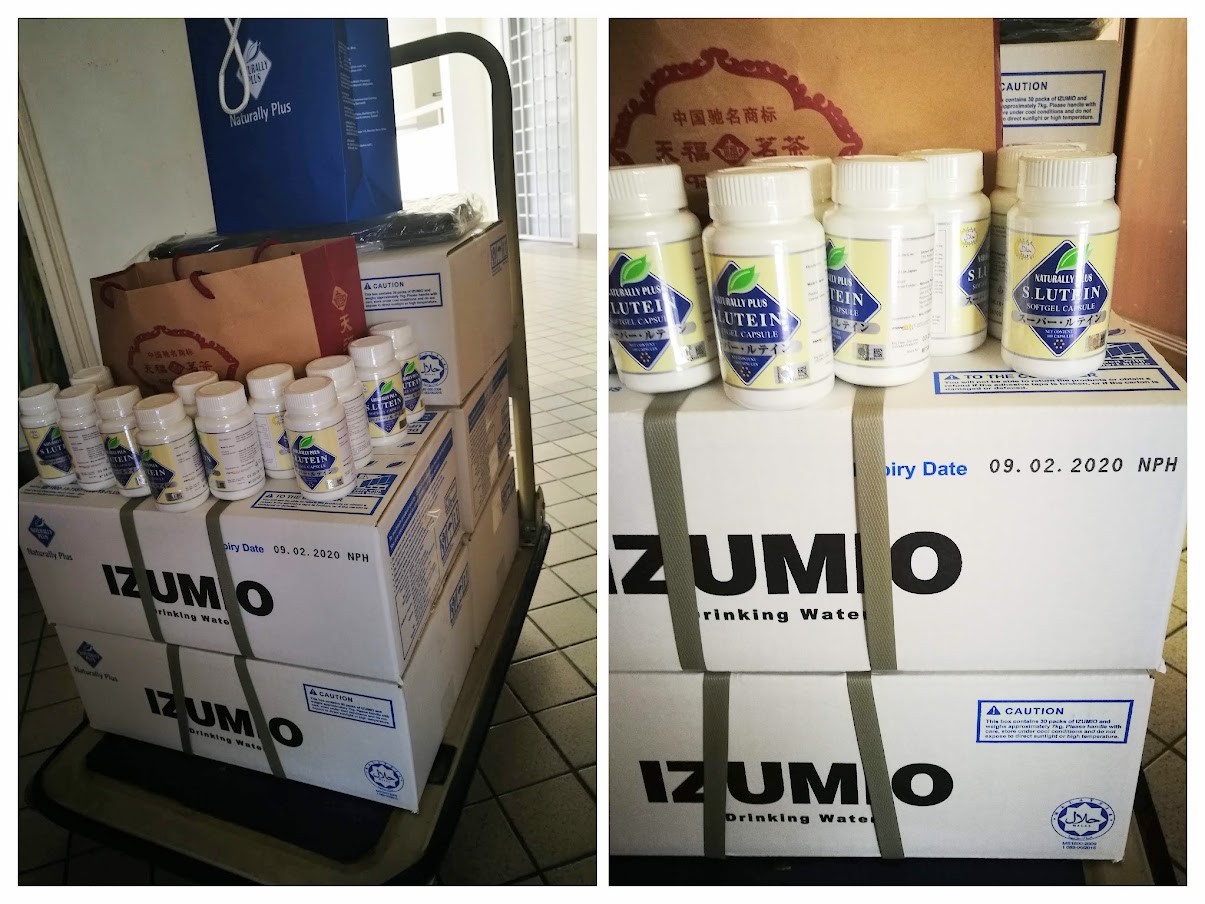 The February promotion has been so encouraging that Naturally Plus is extending it to 28 February 2019! 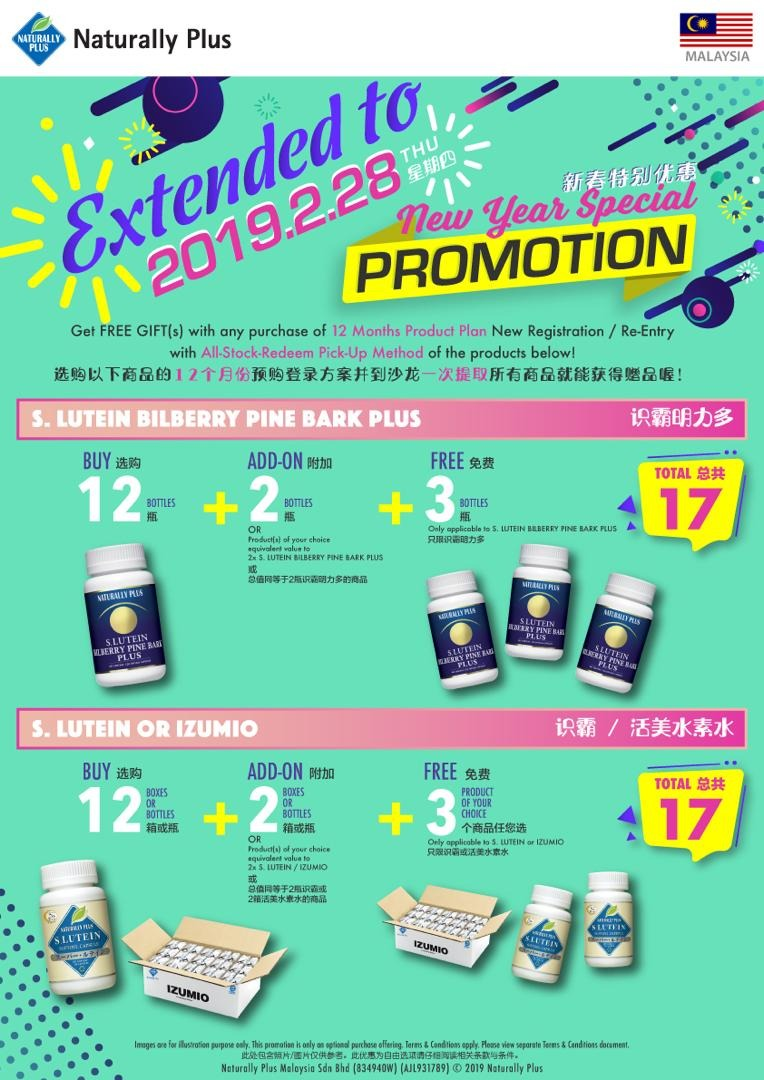 This is by far the best promotion offered by Naturally Plus. If you are interested in taking a package or just want to try out one or two products, do let me know. I can be reached at email shireenyong@gmail.com OR Whatsapp 019-266 4290.

Days just after daughters no.1 and no. 2 got well, next in line to get shot in the stomach was me. And of all the ailments, I was down with UTI. Unbelievable. The last time I had UTI was probably more than 2 decades ago.   What a terrible month November has been for us.

It all started yesterday morning. I woke up feeling like I had not slept the entire night ~ malaise and totally lacking in energy. I went for my usual morning workout session for 40 minutes and struggled to even brisk walk. Then at about 11 a.m. after I got up from my catnap, I had the first few symptoms of a UTI with pain when I pee-ed and a terrible heavy pressure on my lower ab. I dismissed it as mid-cycle pain, which I sometimes get.  But it only got worse. I had this urge to pee every 5 minutes and with blood in my pee. I was petrified! Never had I experienced blood in my pee before. I was certain that it was UTI.

Even with this irritating pain and heavy pressure on my lower ab, I forced myself to get about with my chauffeuring chore – brought Drama Queen to tuition, fetched mil to the hair salon then fetched DQ back, bought lunch and went out again to fetch mil home. By evening, after picking up DQ from school, I told her that I am in no way fit to drive her to the dance studio and then fetch her back at 9pm. So she skipped dance class.

I started with my first sachet of Ural at 11 a.m., followed by Waterfall D-Mannose every two hourly.  Cass drinks D-Mannose as a prophylactic to prevent UTI.  Thankfully I have many bottles on standby. By noon, the pain got worse. The blood in the pee made it look as if I was doomed to die of some last stage disease. I was SO SO tempted to call the hubs to come home pronto to bring me to the hospital to get my pee cultured and pop some antibiotics to end the misery and pain.  I wasn’t sure if my home remedies would work as the blood in the pee made it look chronic. BUT I knew the effects and consequences of taking antibiotics. I’d seen how Cass got resistant to all antibiotics each time she had UTI when she was a baby, pre-surgery.

I soldiered on and kept drinking Waterfall D-Mannose every 2-hourly. I also drank Ural in between with lots of Izumio hydrogenated water. I must have drank about 4 packets of Izumio yesterday. I also applied Oregano and Thieves essential oils on my bladder region and spine throughout the day.  I was running to the loo to pee every 10-15 minutes with agony each time. The pain and discomfort were nightmare!

By 8 p.m., the blood in the pee stopped and the pain lessened. Thank God I managed to sleep pretty well, though I got up to pee every two hourly and to drink D-Mannose.  By morning, I was well enough to go to Cass’ school to settle some stuff for 2019.   I continued with Waterfall D-Mannose, Ural and Izumio  with topical application of Oregano and Thieves EO today.

As of typing this post, there is very little to no pain when I pee. But I’ve got a headache and body pain the whole day.  I shall continue to take Waterfall D-Mannose as a preventive measure for the next one month. From my experience with Cass’ UTI attacks, some stubborn bacteria would be hiding behind the walls of the bladder when medication is administered and not completely flushed out. Six weeks later, these bacteria would grow strong enough to multiply and Cass would get mini UTI attacks.  These attacks can go on for a year and treated with my home remedies each time.  Thus, she still takes Waterfall D-Mannose on a daily basis on a prophylactic dose.