Sodium laureth sulfate, or sodium lauryl ether sulfate (SLES), is a detergent and surfactant found in many personal care products (soaps, shampoos, toothpaste etc.). It is an inexpensive and very effective foaming agent. Although SLES is considered safe at the concentrations used in cosmetic products, it is an irritant similar to other detergents, with the irritation increasing with concentration.

Recently, I banned my 2 older girls from using liquid body shampoo and replaced it with Johnson & Johnson’s bar soap. From my own survey, most bar soaps do not contain SLS, thus you will notice that there ain’t much suds when in contact with water. SLS aside, I find that using bar soaps much, much more economical.

What type of soap do you bathe your kids with? 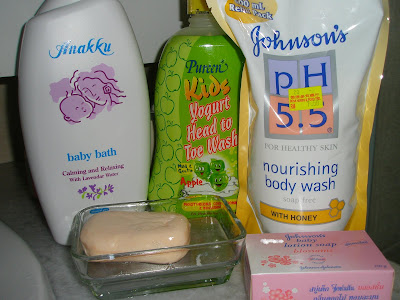 The different types of soaps my kids and I are using now.

Do zoom over to Old And New Stuff For Sale to view my new collection. Shipping is still FREE!

Remember I had written about the swollen lymph nodes in Sherilyn’s neck sometime back? Well, after more than 3 months, the lump can still be felt on her right neck. Though it has shrunk in size considerably but the fact that it’s still there made me uneasy. So upon the recommendation of her paed, we brought Sherilyn to Pantai Cheras Medical Centre last week to have an ultrasound scan of her neck. The radiologist explained that the lump was only an enlarged lymph node and said that it’s very common in kids, especially after an infection or flu. It’s not a lump or a cyst. So that gave me some relief but I still have to monitor the size of the lymph node. 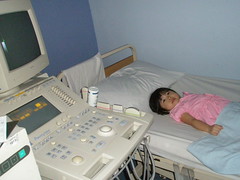 Sherilyn was so tensed as she lay on the bed in the cold air-cond room. 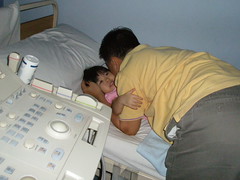 When the radiologist put the cold gel on her neck, she cried and struggled, so daddy had to hug her and carry her throughout the scan. We were all so glad and relieved when the whole thing was over.

We just came back from the paed’s clinic. My poor baby Sherilyn’s lymph nodes on her right neck, just below her jaw are swollen and infected. She has also been having gluey yellowish-greenish goo on her right eye for the last 3 days and I thought she was just plain ‘yeet hei’ as the chinese say it or heatiness in her body coz she had been eating quite a bit of durian, biscuits, corn flakes and pan-fried tempeh lately. I am also having a strep throat and slight runny nose with phlegm and I guess Sherilyn must have gotten the bug from me.

Careless mummy me didn’t even notice the swell in her glands near her neck until daddy felt it last night as he was cuddling her while reading to her. When I touched it and felt a lump there, I really felt a big lump in my throat, so did DH. Being the wimp in us whenever health issues affect our 2 precious daughters, we were actually quite worried, more so as the swell is on the lymph nodes in her neck. All sorts of morbid thoughts came flashing through my mind and I am sure DH’s too, coz I could see he was just as worried but just put on a “nah…. nothing to worry wan” look on his face.

The paed said Sherilyn’s lymph nodes are infected and if we brought her to the clinic a few days later, the lymph nodes could get inflamed and then more invasive medical treatment is necessary. The lymph nodes got infected as they were trying to fight off virus from invading the body. She also has URTI (upper respiratory throat infection) and antibiotics (Augmentin) is needed to treat it. She was also given an ointment for her eye and allergy medicine for her nose.

As Alycia has also developed a slight cough this morning, she was also given an allergy medicine for her nose. Both the gals have sensitive nose and get nose allergies easily, or so said the paed. The total bill came up to RM140. Cost aside, DH and I are both relieved that Sherilyn’s swollen glands are nothing serious.

I used to bring Alycia and Sherilyn to the playground to jog and play everyday so that they can get their daily doses of free Vitamin D from the sun, sweat it out to remove toxins from their little body and to breathe in fresh air to their lungs and brains. A good physical program is in fact the foundation to a good mental and physical health of a child. Of late, I’ve neglected my gals quite a bit :guilty:, also the weather is crazy… mornings will be scorching hot and evenings will be wet. The weather this morning was lovely… it was a tad cloudy and windy, just my perfect kind of weather for an outdoor activitiy and I jumped at the opportunity to bring the gals out to let out their long-stored overcharged energy. Boy, they went crazy at the playground like a just released puppy that has been caged for a long time. Alycia grinning away on the swing. I was reading this month’s Reader’s Digest this morning when I read this article which may be of interest to mummies with boys. Here’s an excerpt of the article :

Use of lotions, soaps and shampoos containing high concentrations of lavender or tea tree oil may lead to breast growth in pre-pubescent boys, according to US National Institute of Environmental Health Sciences.

Pure lavender and tea tree oils can mimic the actions of oestrogen and inhibit the effects of androgen, the hormone known to control masculine characteristics, says Dr Derek Henley, one of the study’s lead researchers. If you use these products on your child and you see changes in his body, talk to your dr or paediatrician.

Scary isn’t it? There is also this current widespread scare of SLS (Sodium Laureth Sulfate), a relatively cheap chemical which produces suds in almost all the body shampoos, soaps and shampoos, which is cancer causing if used excessively. And then there is this recent report in the newspapers that some of the vegetables sold in our local markets are tainted with pesticides, fish tainted with mercury, diseased poultry and what not, tell me…. what are we to eat and what are we to bathe with? I guess back to basics….. use plain water to bathe lor, use natural oil from plants to smoothen on our skin, plant our own crops lor and rear our own fish and chicken lor, just like what our forefathers did decades back and lived till a ripe old age!

Before Sherilyn came along, Alycia was indeed very very precious to me. I’m not saying she’s not precious to me anymore now but being the only child then and an extremely hard-to-get precious baby, I was really very ‘kan cheong’ (overly anxious) over her then. Even a body temp of 37.5 degrees Celcius then would sent DH and I rushing Alycia to the paed, only to be sarcastically told off as being overly anxious parents by the paed.

During Alycia’s 5th month well-child check up and immunization, our paed discovered that there were some ‘clicky sounds’ from both her hips. He then suspected hip dysplasia or dislocatable hips on both her hips. He then referred us to have Alycia checked by an orthopaedic. Upon doing an ultrasound scan of Alycia’s hips and performing a few tests on her hips, the orthopaedic confirmed that Alycia indeed has dislocatable hips and a shallow hip socket. I was frozen with shock and disbelief and was dazed at the orthopaedics clinic as the dr. explained Aly’s condition to DH and I, treatments available and showed me the human bone anatomy. When I heard that diagnosis, I felt my life and happiness were beginning to crumble to an abrupt end. Oh God, what’s going to happen to my precious beautiful Alycia? Is she going to be cacat or hobble in future? What would the future behold her if she really can’t walk normally? All these morbid thoughts came flashing thru my mind as I was seated at the clinic that I wasn’t even listening to what the dr was saying. My mind just went blank. For the next 4 months, I again surfed thru the net to study Aly’s condition. The diagnosis, prognosis and pictures shown on the net weren’t too encouraging and I was really depressed. All I could do was just to pray to the Lord.

The dr. suggested that we try a non-invasive, non-medical method of treating Alycia first. Since she’s only 5 mths old and her bones are still soft and not fully developed yet, there is still hope of ‘intervening’ the formation of the bones. Alycia has to be put on double diapers for 4 months and carried & put to sleep in certain positions in the hope of pushing the hips back to the socket. We spent lots of money on diapers for the 4 months, not to mention Alycia felt very unconfortable and hot in double layer of diapers 24 hours a day for 4 months.

4 months later, a scan and x-ray revealed that Alycia’s hips were symetrical and perfectly in place. When the dr said “I can now confirm that your daughter is ok and does not need to see me again”, I almost wanted to scream. That was another happiest day of my life. Thank God, my prayer had been answered again, it was trully a miracle.

So to all parents whose babies have some kind of imperfections or another, do not give up hope. Pray and miracles do happen.