The Asia Junior Got Talent Finals held on Sunday, 1 December 2019 at the National Film Development Corporation Malaysia (FINAS) saw 48 extremely talented finalists competing to vie for the first prize of USD1,000.  Some of the talents are from China, Norway, Indonesia and Thailand.

Competition was so stiff that I really didn’t think that Sherilyn would stand a chance to emerge as the top 20 winners, let alone the top three winners. All the finalists wore splendid costumes with elaborate make-up. Their dancing and singing skills were impeccable.  All of them are not new to international competitions. And a handful of the finalists are students at the Amber Chia Academy.

There were 8 judges at the competition. I can’t remember the names of all the judges but the most prominent ones whom I remember are world renowned magician Andrew Lee, Beatbox expert Koujee, co-founder of Asia Junior Got Talent Amelia Lee and violinist Dennis.

Magician Andrew Lee, who shot to fame with his daring knife and card trick on Asia’s Got Talent and Britain’s Got Talent is the first Malaysian to perform at the London New Year’s Day Parade to usher in 2019. He’s one very amazing guy, who’s not only dashing and confident but extremely charming. Well, what do you expect from a magician; he sure can charm any girl! And he’s the judge who called Sherilyn back to the stage after her performance, got someone to pass her the mic so that he could hear Sherilyn’s interpretation of what her dance depicted and gave her some very encouraging words.

It takes someone with hell a lot of guts and tenacity to stand in front of 8 judges at the set with blinding lights and talk, dance, sing and flaunt their talent.  I’m one who can never do it. I wonder where Sherilyn inherits her guts from. 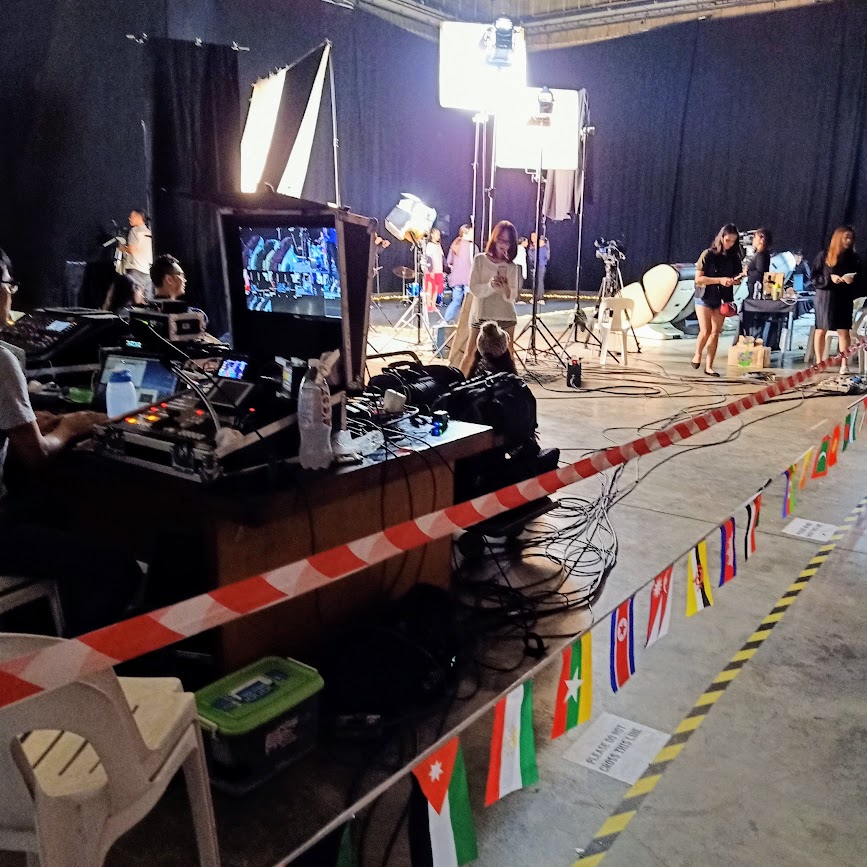 All 48 finalists of the AJGT: 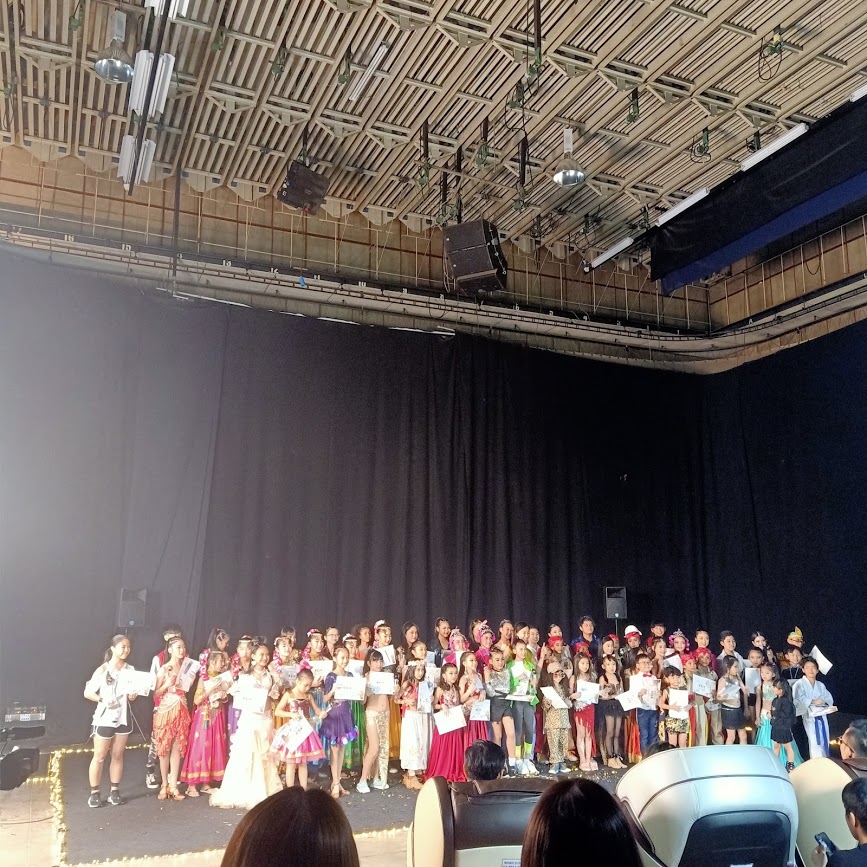 Of all the 48 contestants, Sherilyn was the least dressed up. She was dressed in rags with no lipstick. She used fake blood (bought at a Halloween stall recently) on her body and painted her face with black eye shadow.  She really looked like a  kidnap victim and very much like a vagabond poacher on the street too.  The ragged t-shirt wasn’t her choice of costume. But when she could not find an apt white dress from the mall, she came up with the rags herself using a new white tee that she’s recently bought.

Sherilyn’s dance depicts a girl who’s been held bondage and tied up for years and when she finally escapes, she unleashes her freedom and euphoria through a powerful dance. I was in serious doubt that she could wow the judges with her ragged costume and lack of make-up with messed up hair.  Watching each contestant present their impeccable dance in their immaculate make-up and props made me even more nervous. How could my dancer in rags compare to them?  When it was finally Sherilyn’s turn, my heart thumped so loudly and I  hyperventilated so loudly that I was certain those seated  next to me could hear it HAHAHA!!

But Sherilyn made it to the top 20 winners!! And I just could not believe my ears when I heard her name and number announced 😱 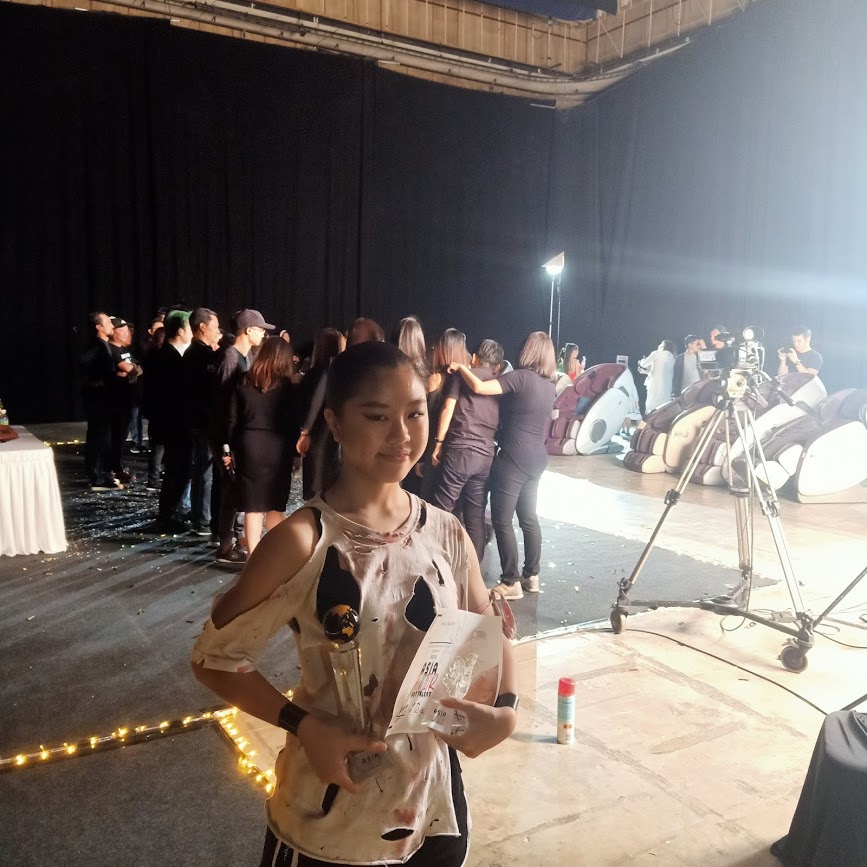 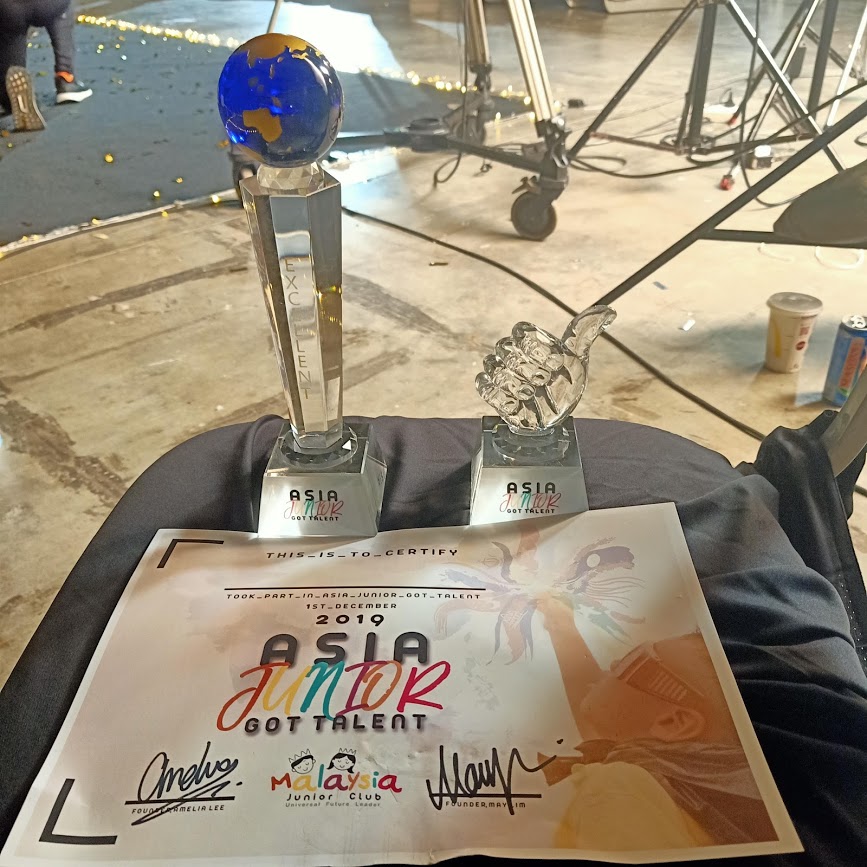 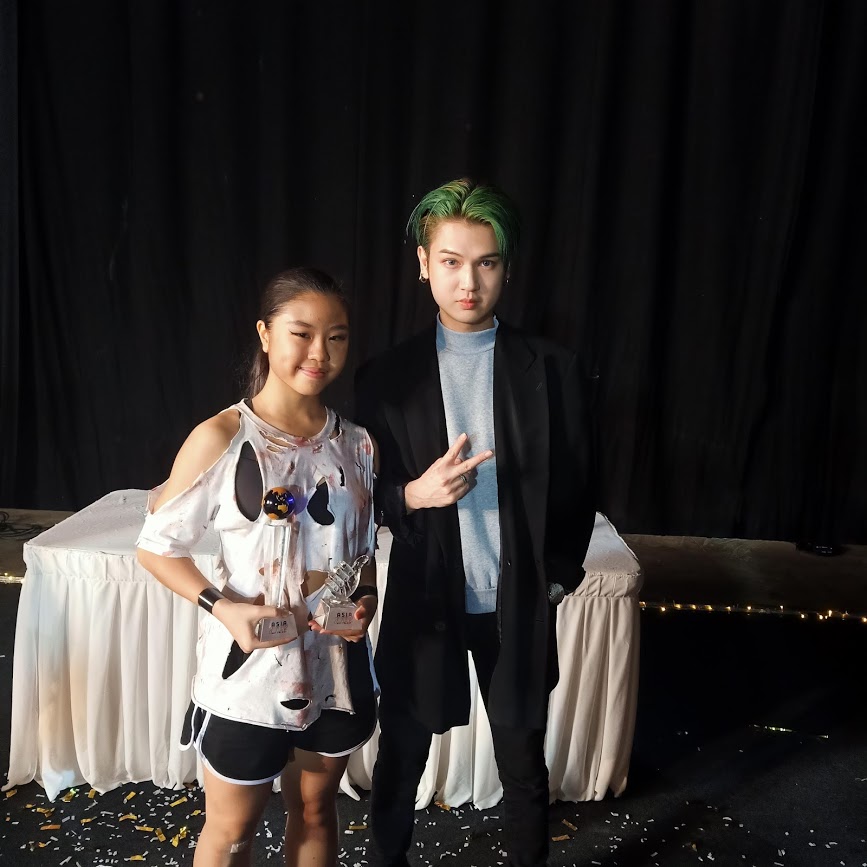 With one of the top 20 finalists – a Latin dance couple (they’re only 12 years old and what a cute dance couple they  make!) who performed extremely well in their routine.  Sherilyn made a few friends from this competition, including the contestant from China. 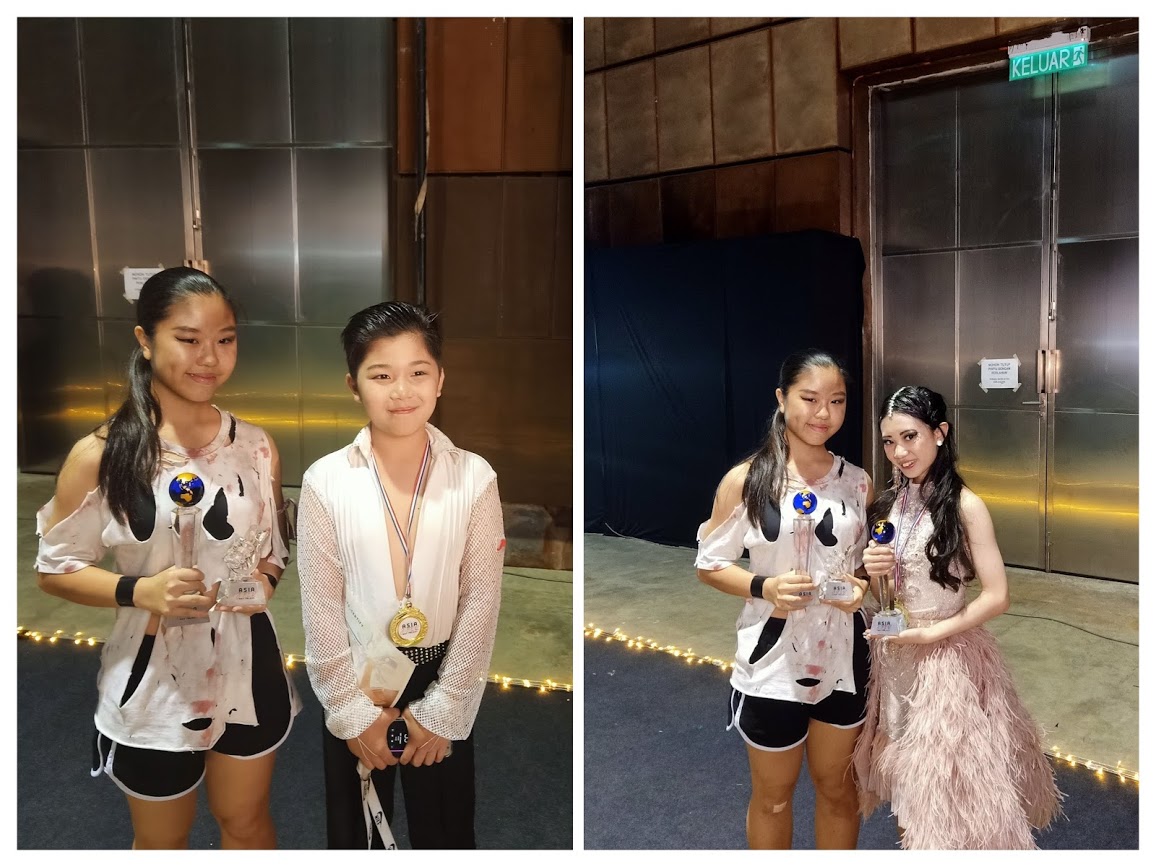 My 8-hour camp at FINAS wasn’t that bored as I made friends with this little cute girl’s mom and grandmother.  Nathelie, the cutie pie who could sing and dance like a pro is also one of the top 20 winners. She’s been competing locally and internationally since she was 6 years old and she’s such a natural talent and charmer!  Her grandma (in dark glasses) is in her 70s and such a hot grandma. Both she and her daughter (Nathelie’s mom) took good care of Sherilyn when I hadn’t arrived at the studio yet. Nathelie’s mom helped me to record Sherilyn’s performance projected on the screen while I went backstage to watch and video record. They’re truly guardian angels! 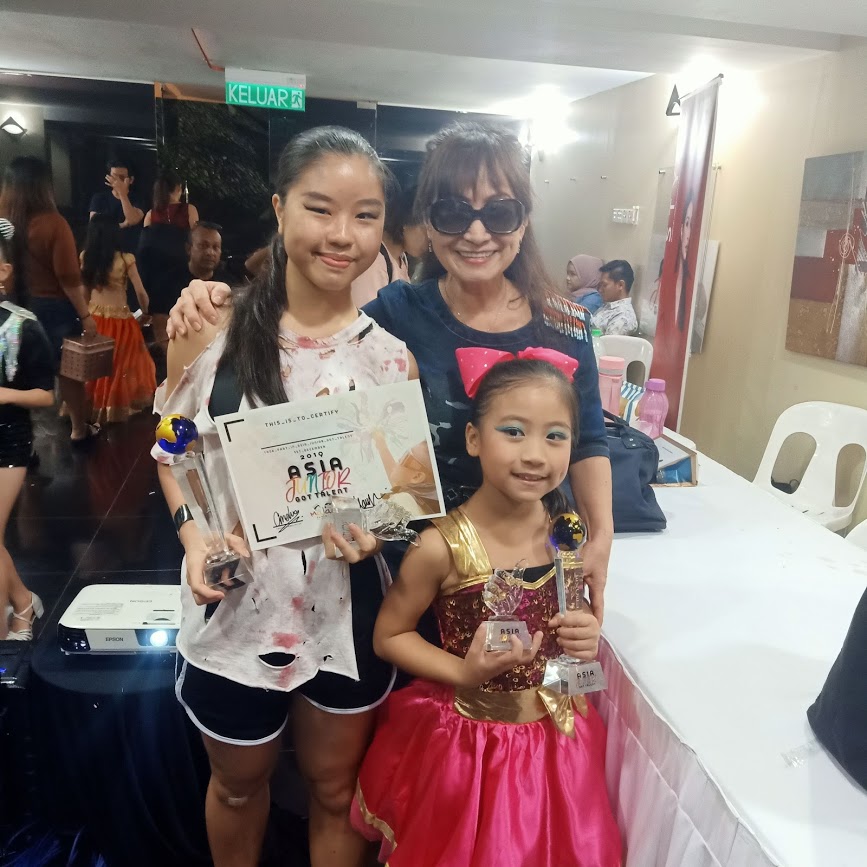 Next year will be a ‘gap year’ for Sherilyn, a year where she will stop competing to concentrate in her studies as it’s her PT3 exam year.  She will start competing again the following year when she’s 16. Hopefully we’ll meet Nathelie and her mom and grandmother again in one of those competitions in future.

So my dancing queen resumed her contemporary dance classes on Tuesday at another dance studio on Tuesday.  This studio is not  new to her but the dance instructor is.  Sherilyn used to attend ballet classes at this dance studio when she was 4 – 7 years old.

On the same night of her first dancing class, she received an email from Asia Junior Got Talent, informing her that her dance audition video submission has been approved by the judges! And the finalists will be competing on 1 December 2019!

Two weeks ago, just before I sent her to school, Sherilyn got me to shoot a bunch of videos of her dancing. The videos are for online audition entries for a couple of dance competitions.  We spent over an hour at the function room of our condo shooting over 10 times until I felt dizzy! Dizzy cos this girl is such a perfectionist and she was instructing me how to aim the phone and I was running around in the room, trying to catch her at the best angle. As she was flipping and twirling around really quickly, I had to keep up on my pace.  One moment she was complaining that my sandals were making annoying sounds (can be heard in the videos) and the next moment she was saying that I didn’t know how to shoot at the optimal angle, thus wanted another take. I got so frustrated that I wanted to walk out of the room.🙄

So for the next 2 weeks, my dancing queen will be busy again, choreographing and rehearsing for the Asia Junior Got Talent finals. Guess this will be her last competition for this year and next year. Her competitions will resume after her PT3 exam next September. 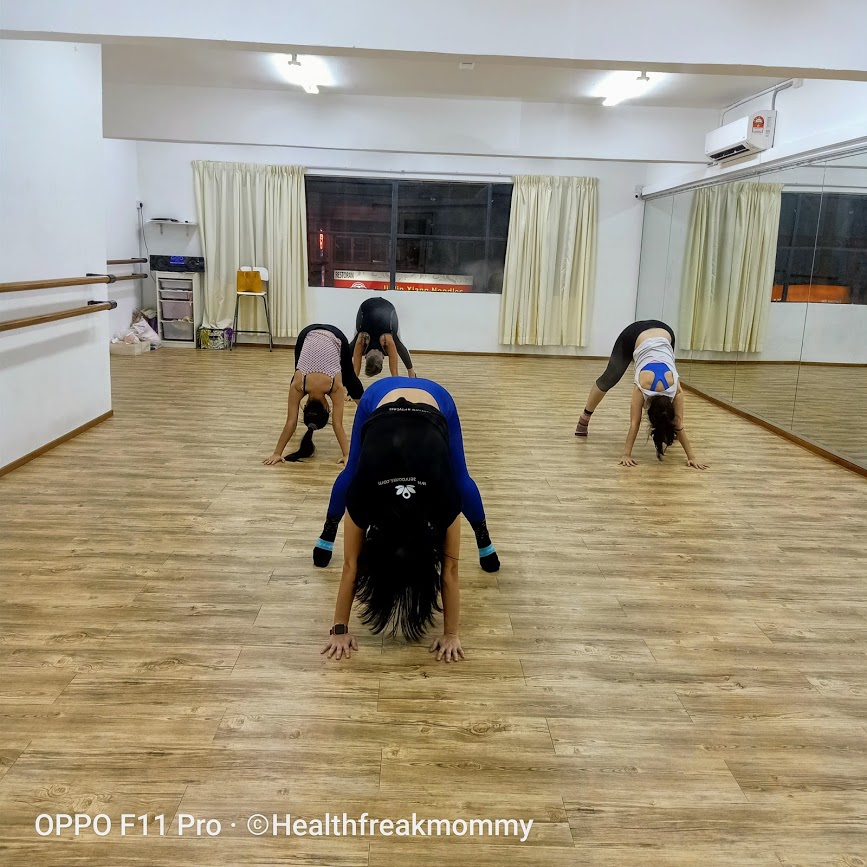 Would you believe it if I told you that our dancing queen choreographed all the dance moves herself for the GTB competition and for her school’s Chinese cultural dance? Sherilyn stopped going to the dance studio for lessons several months ago as I think she needs a dance teacher who can teach her more advanced techniques and help her to raise her game. 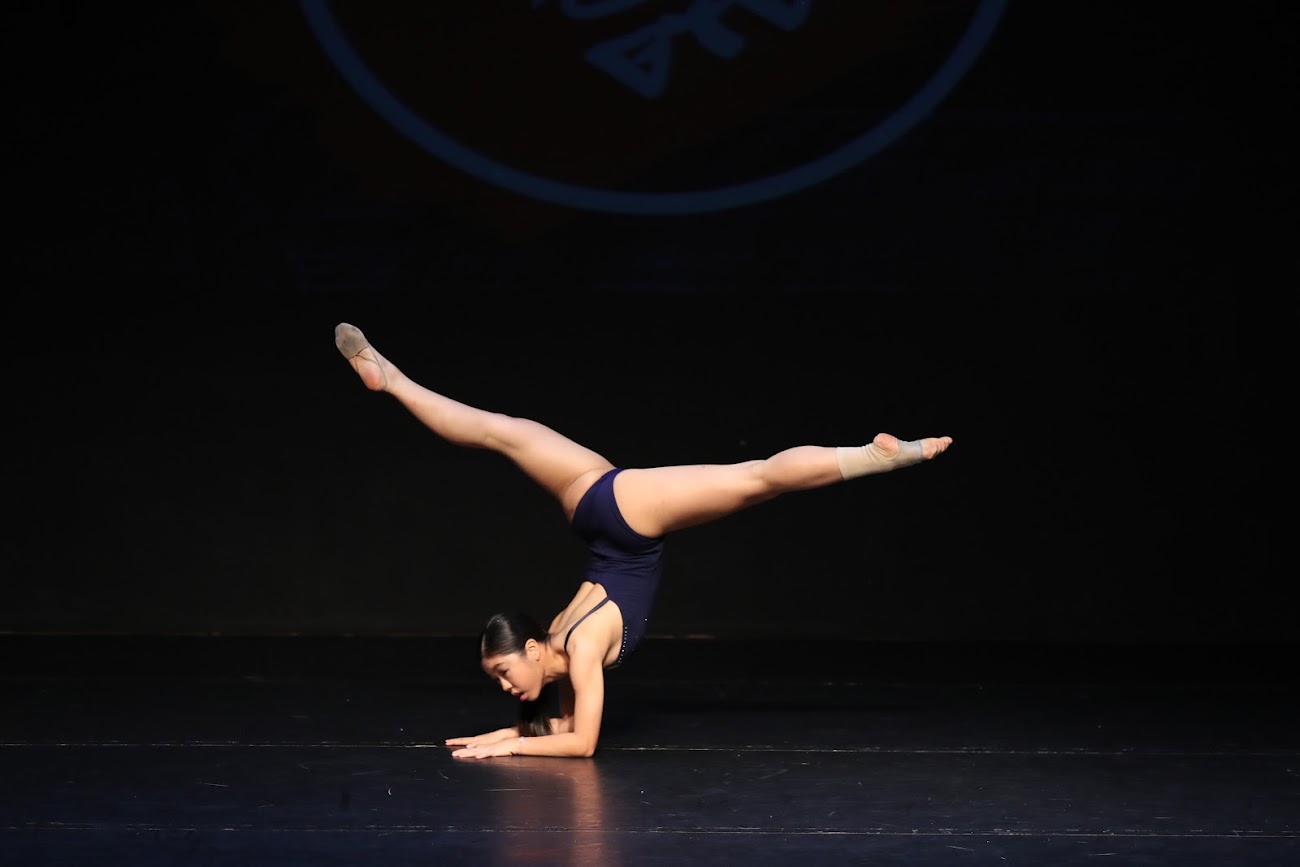 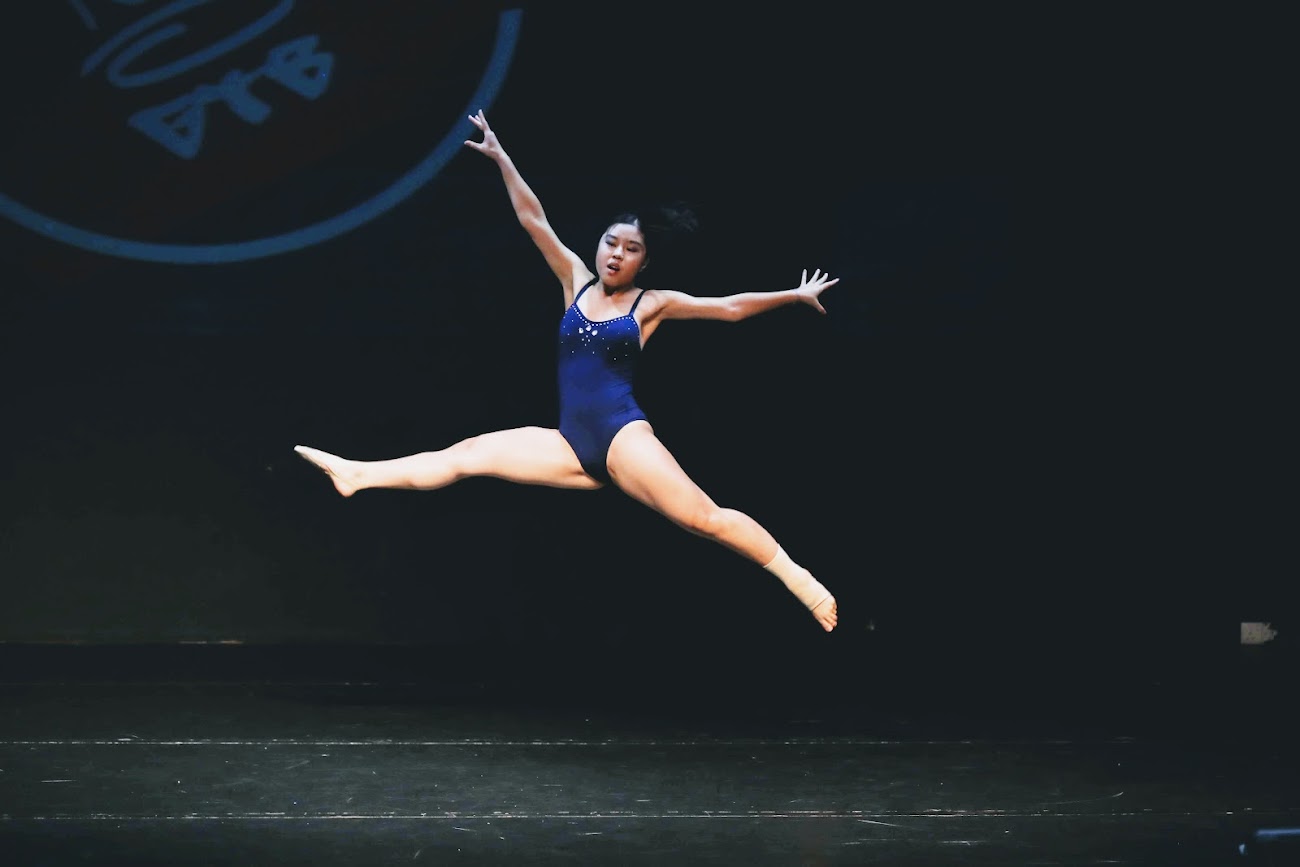 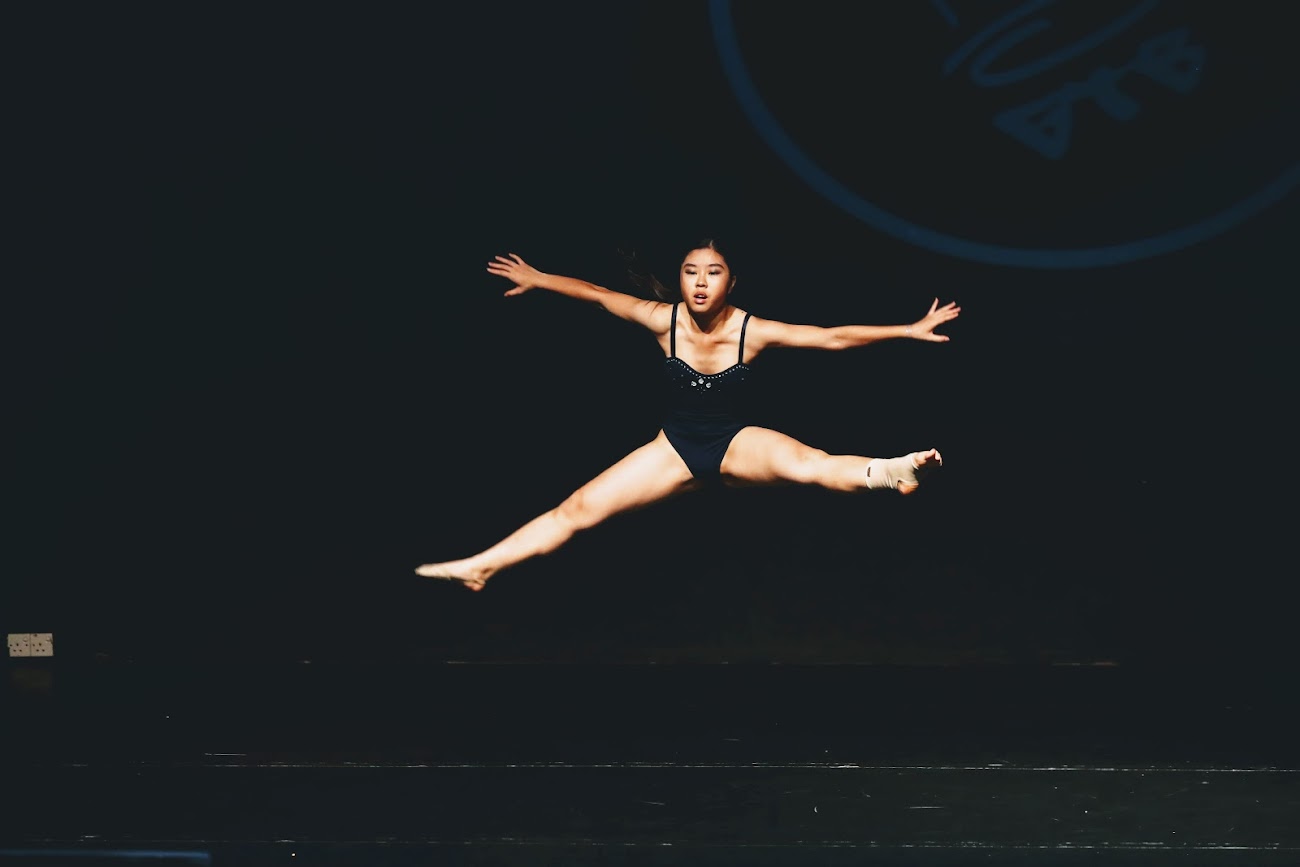 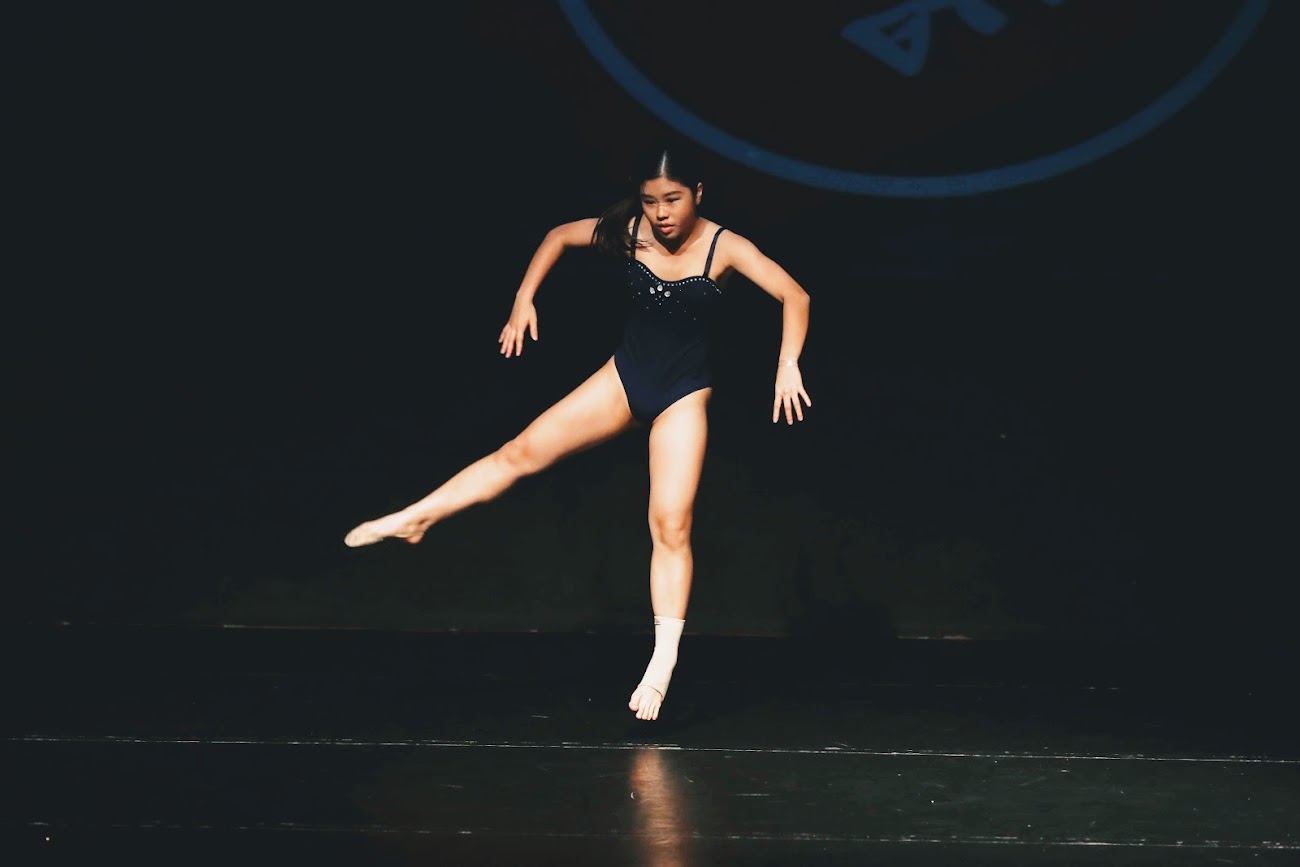 Sherilyn bought rhinestones and glued them to her dance costume herself. 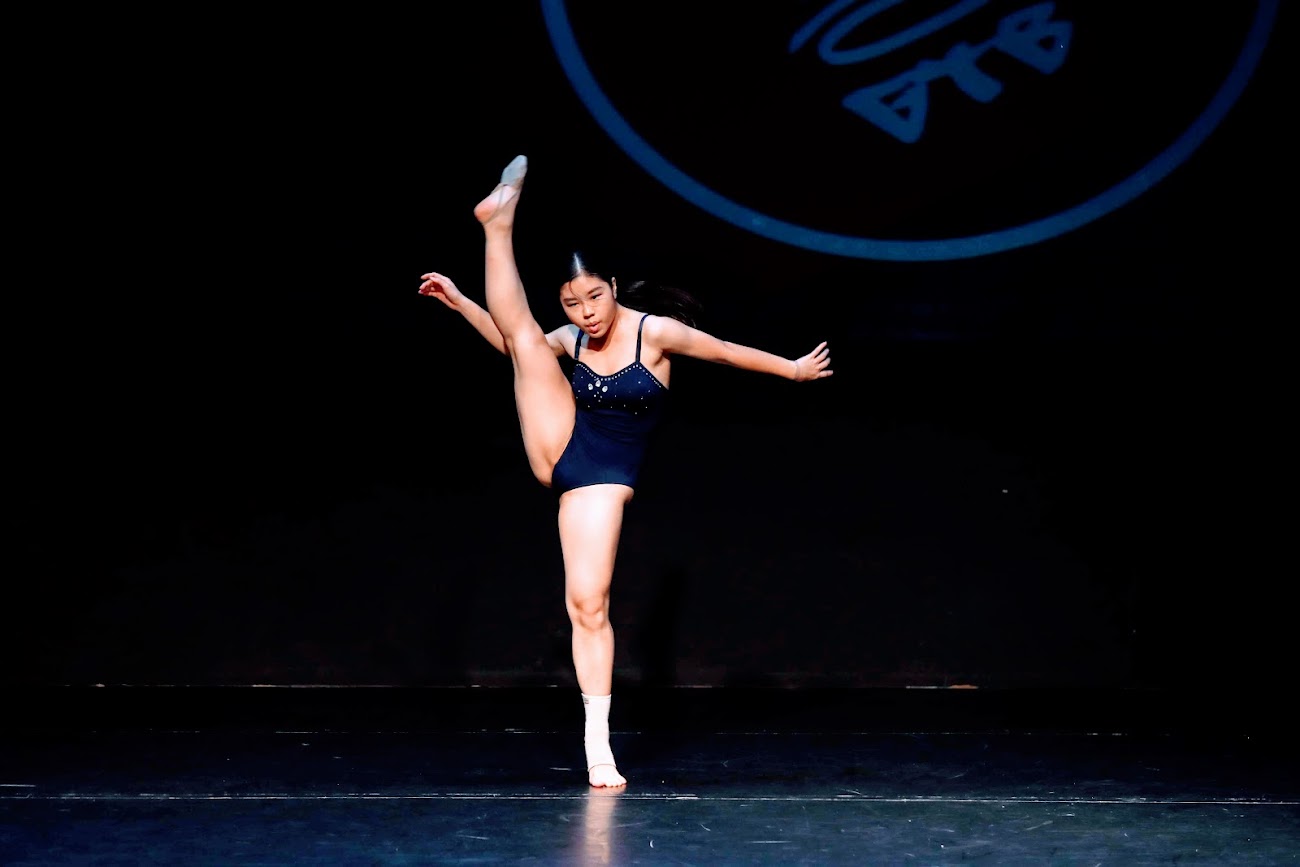 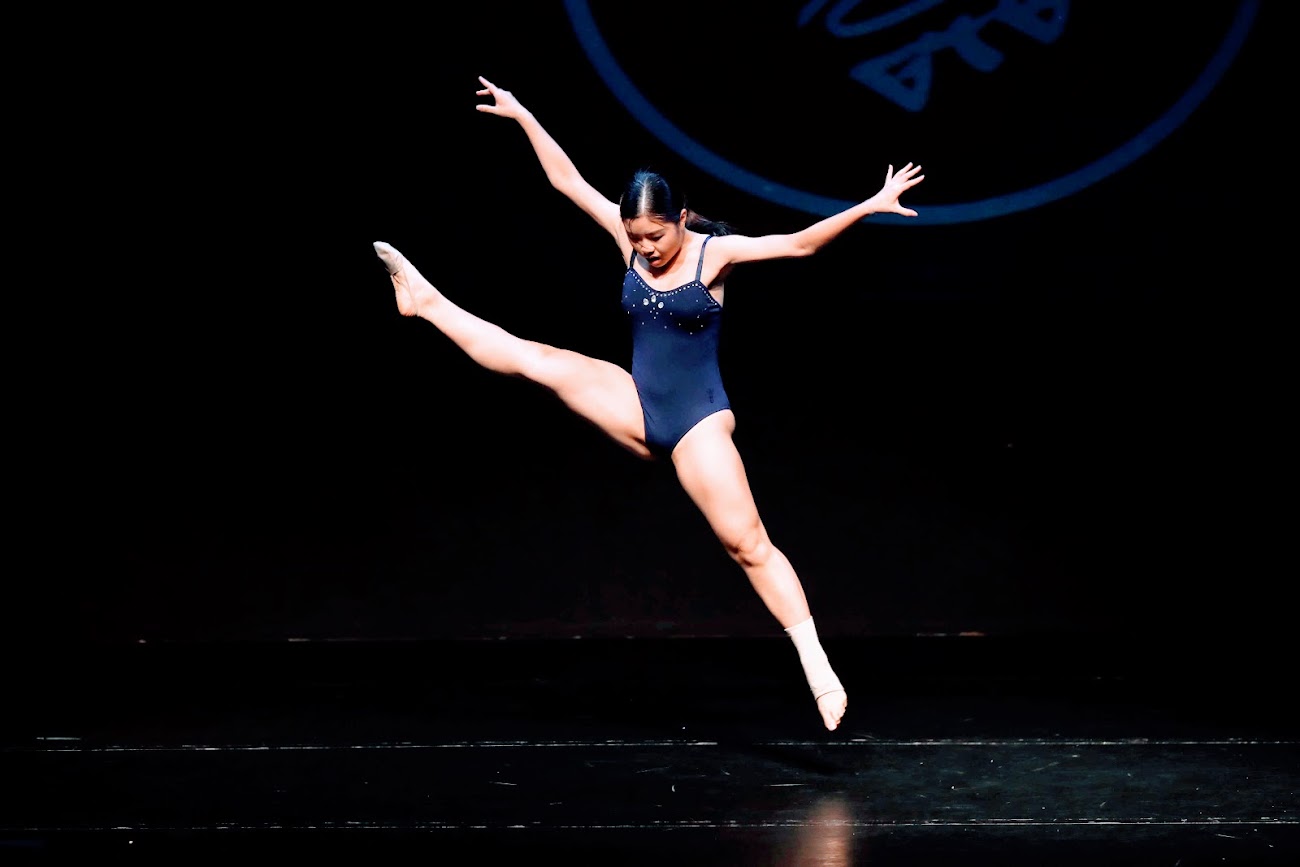 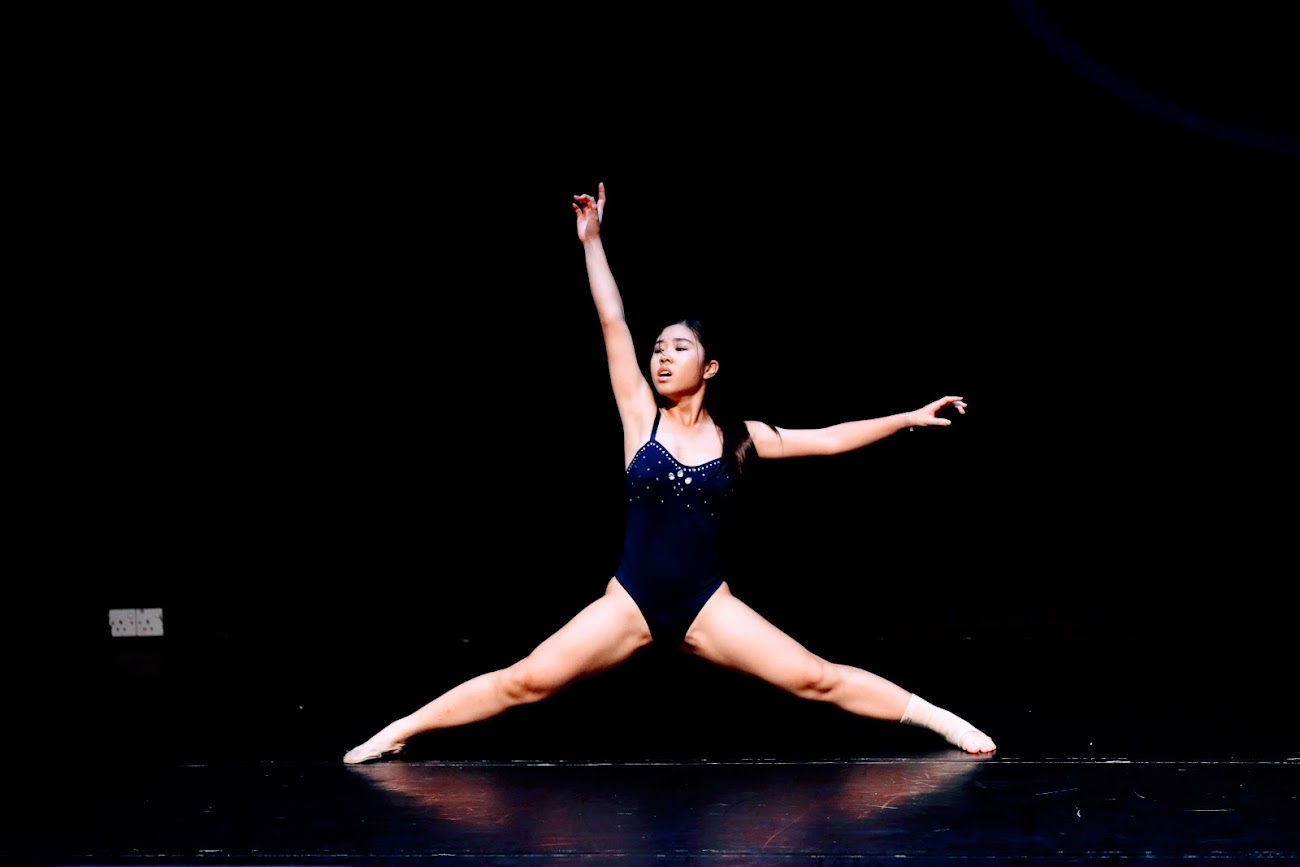 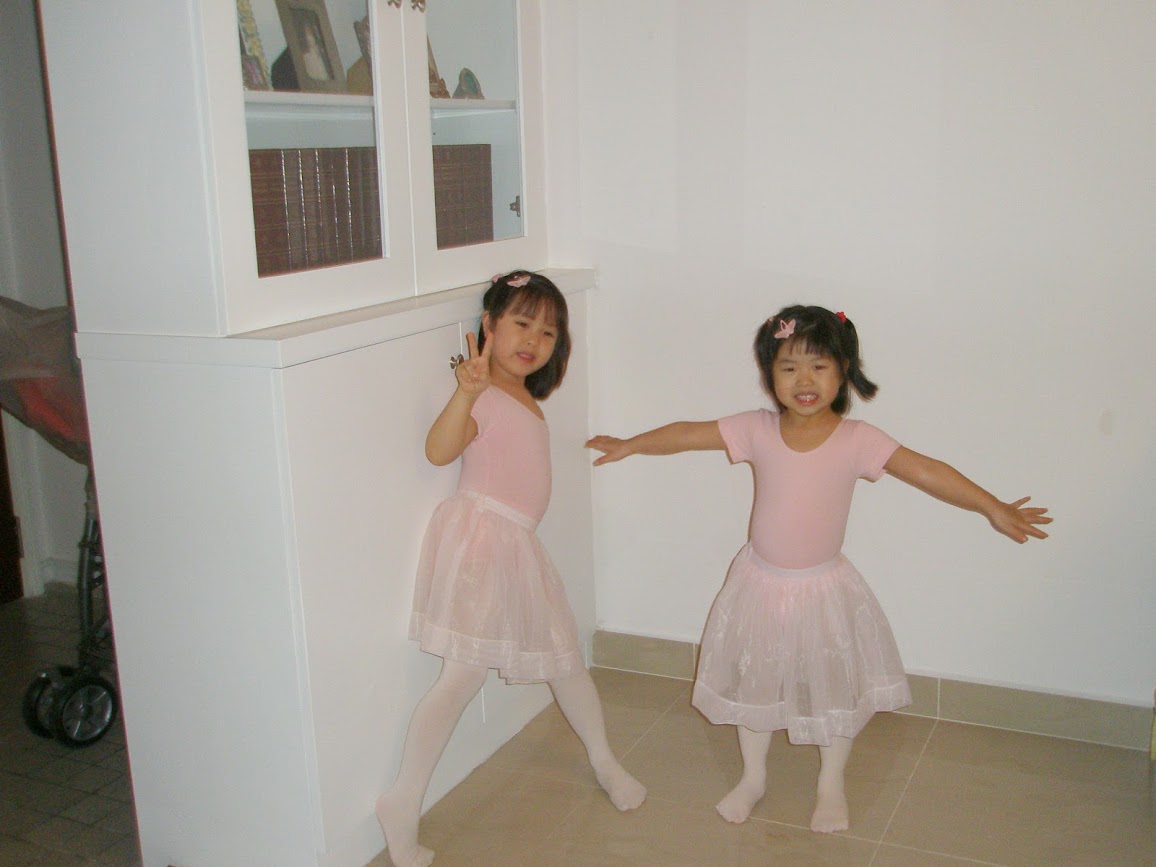 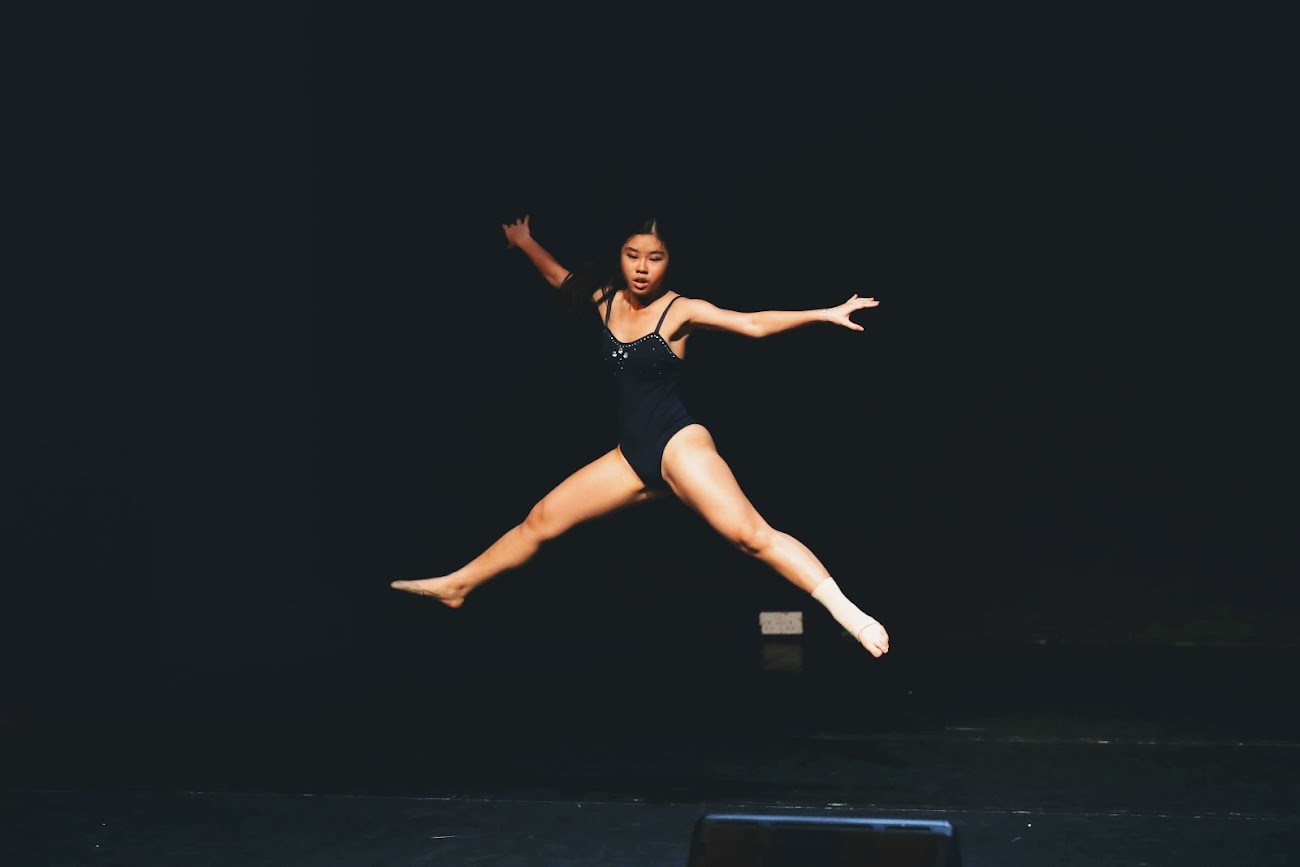 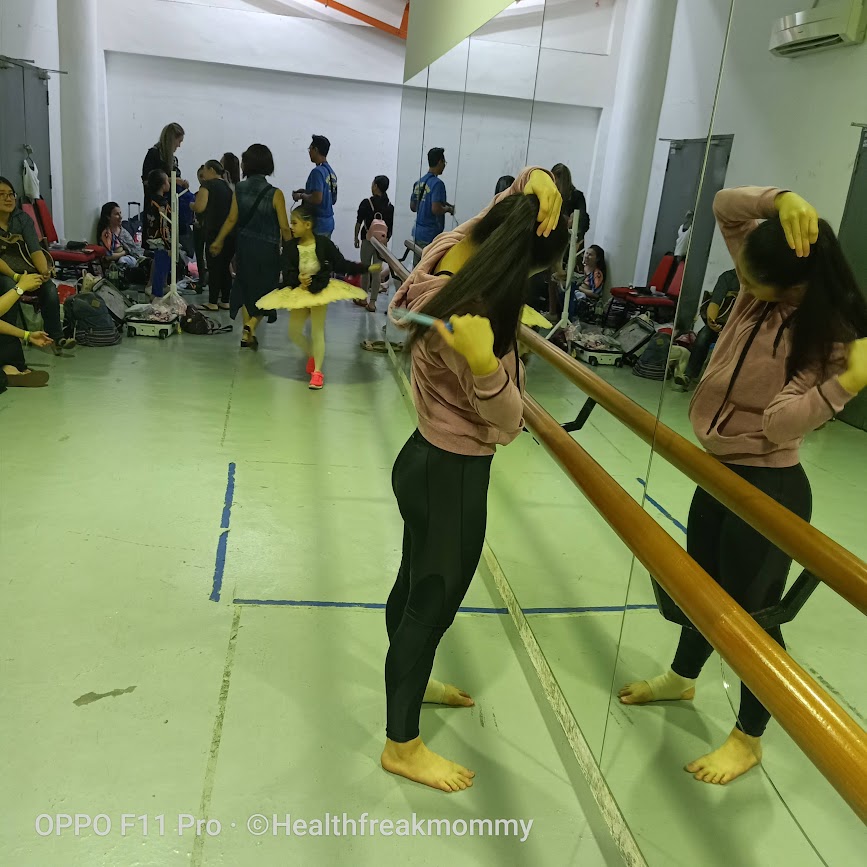 My dancing queen quietly registered herself in the Berjaya Teen Star Challenge 2018 audition last year and ‘recruited’ 2 of her classmates to be in her dance team. She choreographed the dance herself.  During the audition, one of her friends forgot the steps – they didn’t make it. Sherilyn vowed to try again the following year, though her dad and I didn’t fully encourage her to.

This year, again she quietly registered herself in the 2019 audition, representing her school. I’ve been telling her that it’s a waste of her time participating in so many dance competitions and she should instead be spending more time on her studies. The previous two classmates’ mothers did not approve of this year’s audition as well.  She did not find a partner to dance with her until two weeks before the audition when she chanced upon this Malay girl, D, from her school who is a year her junior at an inter-school sports meet at the stadium.  With only 2 weeks to go before the audition, she trained with D in school almost everyday. D came to our condo during the weekends to practise at our  condo gym.

The audition was held last Saturday. The two girls took Grab to Berjaya Time Square, with D’s mother tagging along.  They audition went pretty well but the judges weren’t too satisfied with D’s steps. Can’t blame D as she only had 2 weeks of practice. Moreover, D does not have much experience in modern dance. She’s a cultural dancer in school but it’s pretty different from modern dance.

The judges told Sherilyn in private that she had two choices:
1. to find another partner OR
2. her partner has to work on the flaws and to come back the next day (Sunday) for the final audition.

When they returned from the audition, they continued practising and perfecting the steps. With only a few more hours to go before the next audition, there was not much that they could do but to try and hope for the best. Sherilyn who choreographed the dance had to change some of the steps at the eleventh hour.

Sherilyn didn’t even tell me that she and her partner got through the second audition to emerge top 40 in Malaysia (modern dance category) to compete in the Berjaya Teen Star Challenge until I Whatsapped her while she was still at the audition venue! 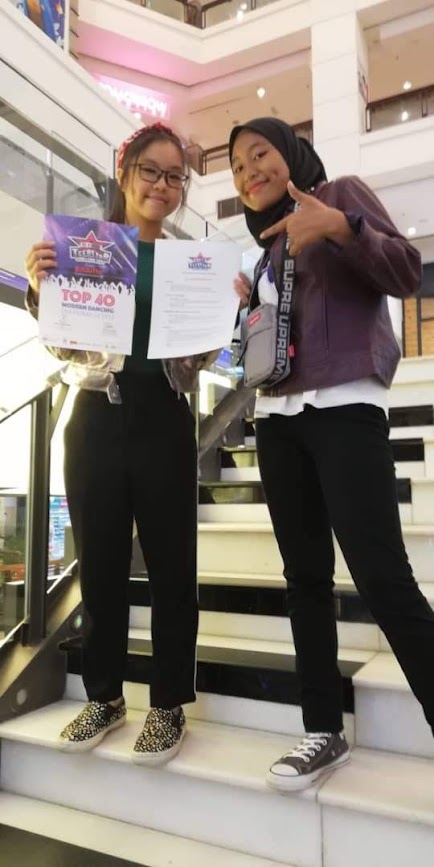 Sherilyn should have named her team The Dimple Girls instead as both she and her friend have the sweetest and deepest dimples on both sides of their cheeks! 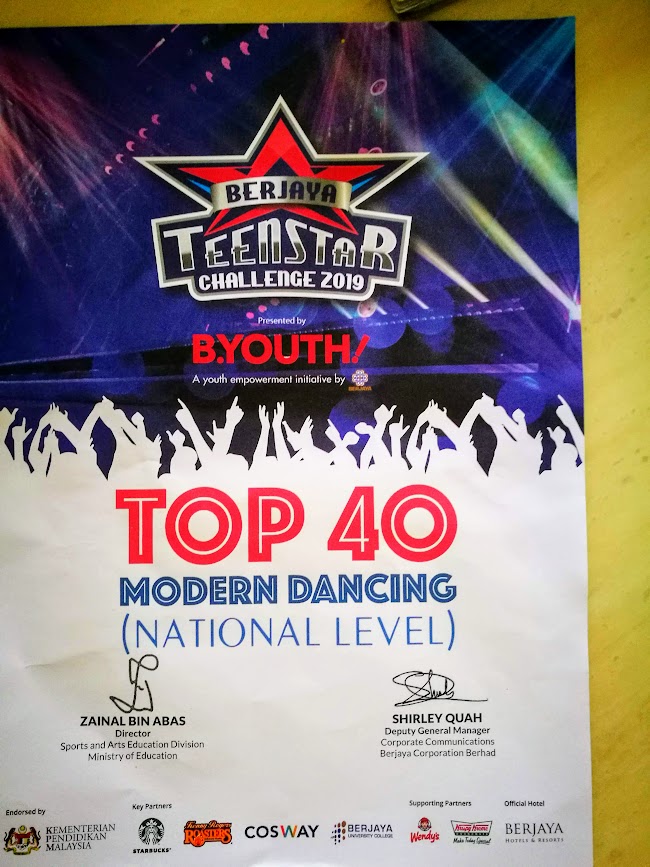 After Hari Raya, all the contestants who got through the audition have to attend a workshop at Colmar Tropicale, Berjaya Hills @ Bukit Tinggi for a short training session on how to perfect their showmanship before the prelims to be held in three months.

When it comes to things that interest her like dancing, martial arts, athletics and baking, Sherilyn’s discipline and focus are impeccable.  This fearless girl loves participating in competitions too.  She woke up very early on her own on both days to get ready – prepped her own breakfast, did her makeup and hair herself and ordered Grab herself. She’s naturally a born leader, in areas that pique her passion, which are all right-brain dominated!