Remember I blogged about the 2 items in my hospitalization bill incurred from 28 – 30 May 2017 that were not approved by my insurer? The 2 items were the power morcellator and the morcellation bag used during the laproscopic myomectomy surgery to removed an 8cm fibroid in my uterus. I was devastated when I was told a few days after my discharge from the hospital that these items totaling close to RM5,000 were not approved by the insurance company.

I sought my insurance agent to help me submit my claim to the Claims Department of the insurance company on the rejected items. My surgeon, Dr Tan Ee Ping was very helpful. Despite her very busy schedule, she helped to write a lengthy report to support my claim. I prayed fervently to God that my claim would be approved by the insurance company. At the Supernatural Encounter Healing Rally with Maldonado which I attended on 30th June 2017, I prayed that this claim will be approved.

Last Friday while I was driving, I received a call from the insurance company and this lady (who’s a doctor) informed me that the insurance company will pay for the entire hospitalization bill, except for several excluded items amounting to RM1,060.77.  I was informed by my insurance agent prior to the surgery that I had to pay a maximum amount of RM1,000 for the surgery, which I had agreed. I could not believe what I heard and  called my insurance agent to ask her to reconfirm the authenticity of the call and to reconfirm that my claim has indeed been approved. I couldn’t rejoice just yet as long as nothing in writing from the insurance company is given to me.

Yesterday, Sunway Medical Center emailed me and attached a fresh guarantee letter issued from the insurance company. In it, it shows that the total amount paid by the insurance company is RM24,272.76 and I, the policy holder only needed to pay RM1,060.77.    With this letter, I could finally put my worry to rest. Words cannot describe how overjoyed I was. I am so thankful to God, to my insurance agent and to my surgeon in helping me!💗 Thank you Lord for answering my prayers 🙇🙏 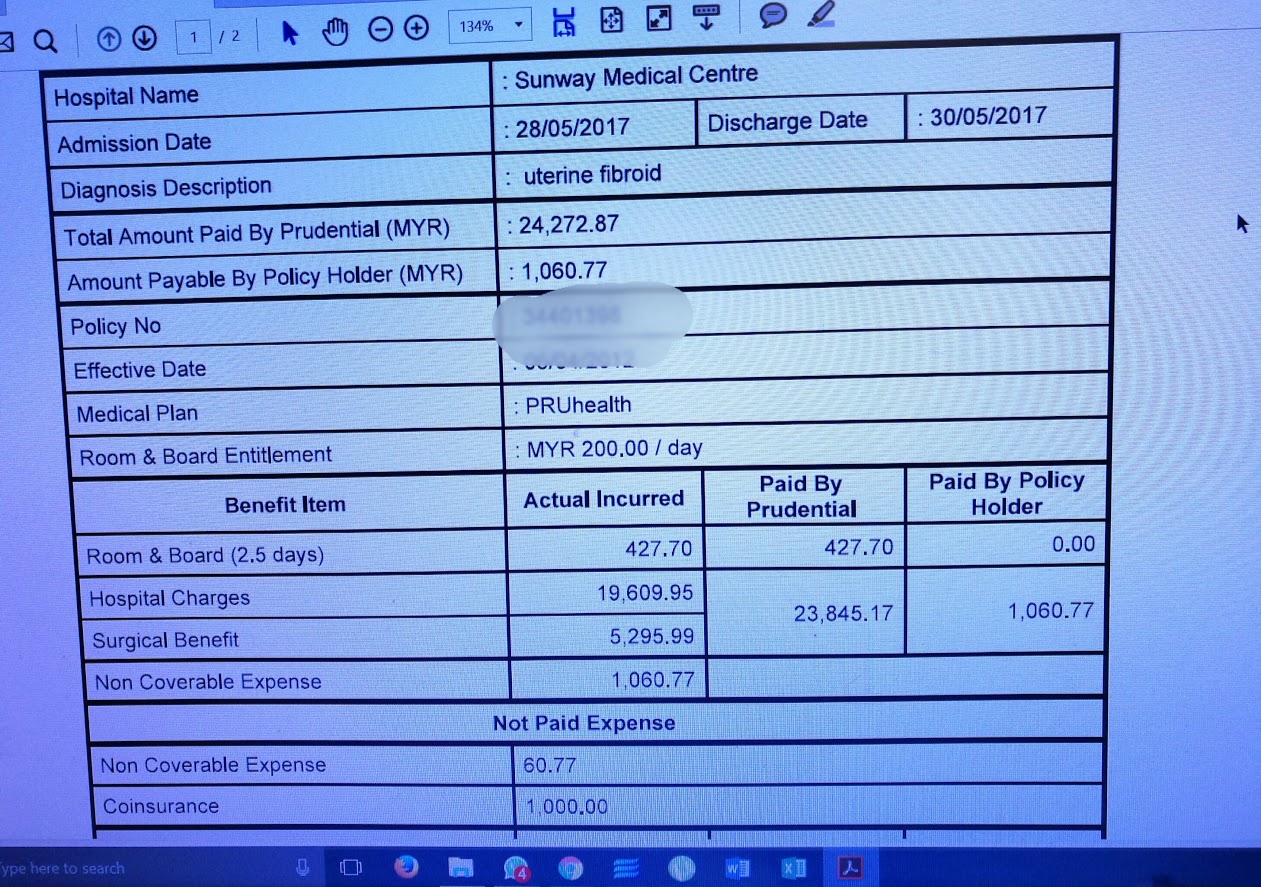 In summary, I needn’t have to pay a single sen for this surgery. In fact, I received a RM1,600 allowance after the surgery, which my insurance agent brought the cheque to me.  I so love her top notch service rendered to me.

What I could not claim was all the outpatient consultations with several gynaes before the surgery, amounting to over RM2k, incurred in less than 5 months.  And did I tell you that it was only after seeing 6 gynaes to seek their opinions that I was finally convinced to go under the knife?  That’s how much I hate surgeries and how hard it is to convince me that I need to be cut up. Thank God all is well now.  PTL!