I got a scare of my life on Tuesday morning (yesterday). It was around 1-ish a.m. and I heard a knock on my room door. I stumbled out of bed groggily with my heart thumping.  The mil was standing  outside and she told me that Cass had woken up on her own to pee. This has never happened before. My alarm clock rings at 2:30 a.m. everyday for me to bring Cass to pee. Something is not right.

I went to the bathroom and saw Cass on the toilet seat. I asked her whether she was OK and she told me that her bladder region felt uncomfortable. Her urethra hurt a little too. She sat at the throne for a good 20 minutes as she kept having the urge to pee. Dang it, classic symptoms of a UTI! I quickly gave her a packet of Izumio hydrogen water.

I was supposed to feed Cass with Waterfall D-Mannose to zap away the bacteria but I had finished my existing stock. My new stock was still stuck in the UK. The seller (Sweet Cures, UK) had missed out shipping my order but bless her ever kind heart, she gave me 2 extra tubs to compensate for their oversight.

I was insanely worried that Cass has another UTI attack. She had been showing some very initial symptoms of a UTI for the past 2-3 weeks but I now know how to spot those initial symptoms and nip them at the bud before the bacteria starts ‘partying’ and multiplying.

There is current research available that proves that bacteria can colonise layers of the bladder epithelium and bury themselves deep within the bladder wall, especially after an antibiotic attack, waiting to reappear when conditions are favourable. Now you see why I am totally not keen on antibiotics. They only offer short term relief, while sometimes they don’t even work. I am pretty certain that Cass’ recurrent UTI attacks lately are caused by the same colony of bacteria from the first attack in November last year, that were not successfully wiped out by antibiotics. They were snugly hiding deep inside her bladder walls, waiting to reappear and multiply when the conditions are right.  Acidic urine creates perfect conditions that encourage this detachment and regrowth.

My diet for Cass now involves an alkaline one, i.e with lots of fresh fruits and vegetables, barley water, coconut water and hydrogen water.  Sometimes this is hard, especially when we eat out.  Almost every darn thing that we eat is acidic, from meat to eggs, milk, bread, nuts and our daily staple. Even cooked white rice is slightly acidic. So when she’s had a very acidic meal, I will ensure that she downs lots of alkaline fluids.

The next day, Cass skipped school. After downing 2 packets of Izumio hydrogen water (at 1:30am and 6am), Cass told me that she no longer felt pain in her bladder region and urethra. I was SO happy but didn’t let my guard down yet. I gave her a total of 5 packets of Izumio yesterday.  Cass is back at school today.

Since I have run out of Waterfall D-Mannose, Cass is drinking an additional of 3 packets of Izumio a day now, making it a total of 5 packets a day.

Below – Cass sipping Izumio in school during recess today. I checked on her in school today and will do the same tomorrow. 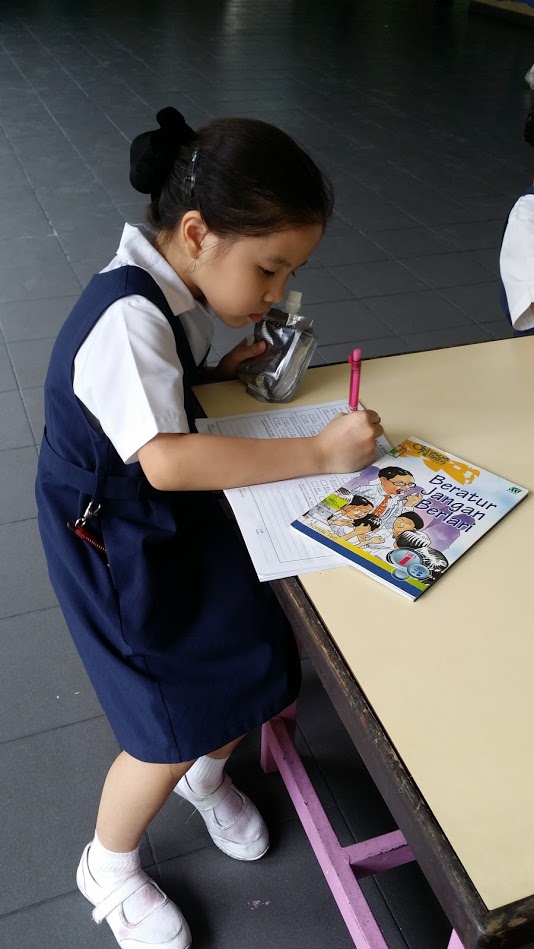 From my experience, hydrogen water is effective in treating a UTI attack at the initial stage. I just have to ensure that Cass drinks it every 3 hourly or so. On top of hydrogen, I ensure that her intake of meat and other acidic foods is kept to a minimal.

If you know of anyone who is suffering from recurrent UTI attacks, do give hydrogen-infused water a try. You have nothing to lose by trying. Give me a call at 019-266 4290 or email shireenyong@gmail.com to find out more.