On day 4, Alycia was still on a fasting mode. She didn’t have the mood to eat anything, though her tummy was rumbling like crazy.  She was already sick of eating yoghurt, mashed avocado and fruit smoothies. She was drooling on Drama Queen’s homemade lemon pie but it was another ‘see but can’t eat’ case.  Everyone felt so bad for her.

When we went to the shopping mall in the evening, we chose Canton-I for dinner so that Alycia could eat porridge. But she wasn’t interested in porridge. She hates it. That’s the worst food in the whole world for this girl, though when she was a toddler, she loved her porridge.  She would bemoan and whine each time she eats porridge now.

At Canton-I, when the porridge arrived, we had to force the porridge down Alycia’s throat, literally. She looked glum with the bowl of porridge in front of her  🤐 What was on this girl’s mind was the shop next door that sells Japanese shaved ice desserts! Throughout our dinner at Canton-I, Alycia kept asking when she could have shaved ice, just like a little girl whining and pestering her parents for something 😂 After a quick dinner, we segued a few doors away to Kakigori to satiate Alycia’s craving for Japanese shaved ice while the hubs and mil continued with their dinner at Canton-I.

And so this was Alycia’s actual dinner on Braces Day 4 ~ a bowl of very refreshing Elderberry & Elder Flower Espuma: 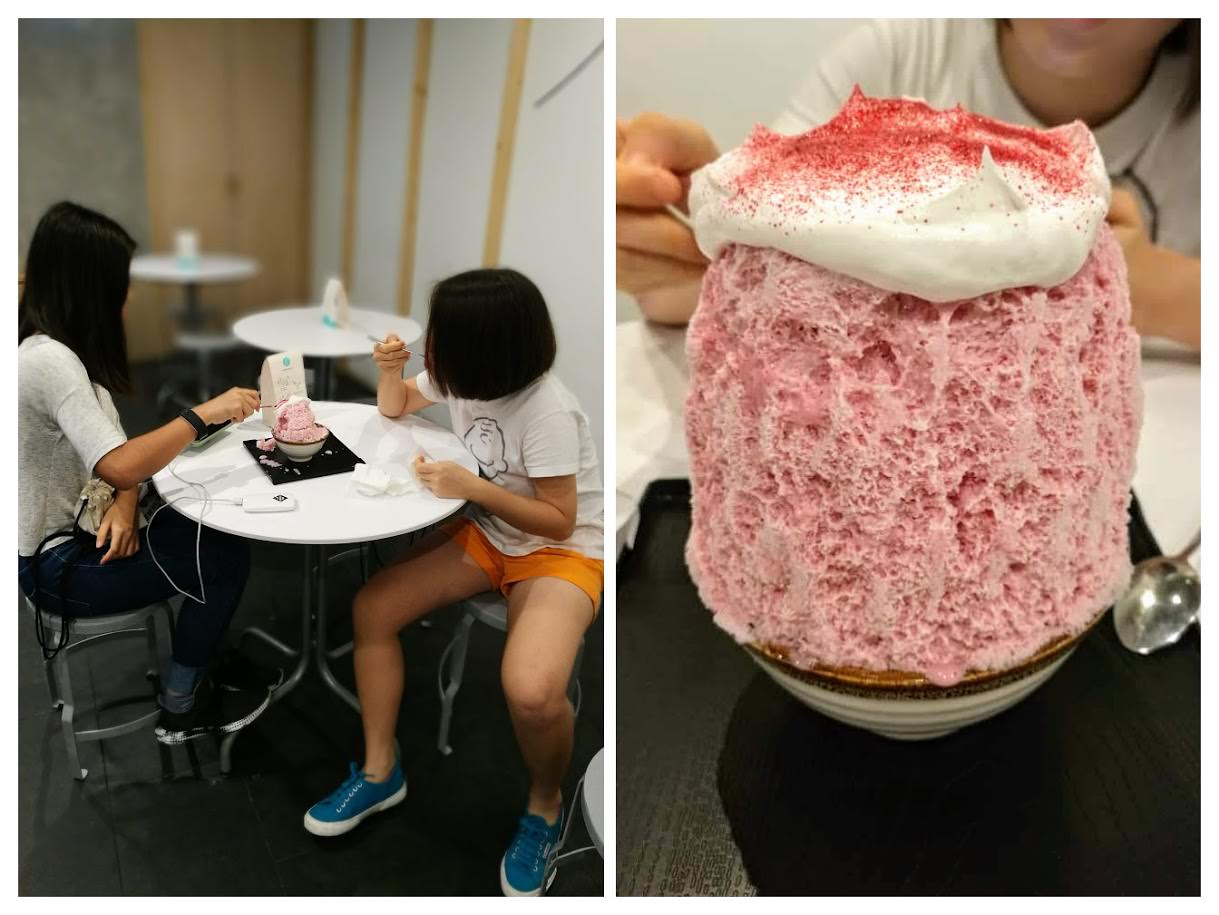 The shaved ice dessert  wasn’t cloy sweet but very mildly sweetened with fruit juice topped with espuma (froth) ~ all natural ingredients and well-curated, which justifies why it has a price tag of RM19.

When I expressed shock that I had to pay RM19 for a bowl of shaved ice, Alycia quipped  that RM19 is for her breakfast, lunch and dinner ~ all in one bowl.  Very clever answer 🙄

Kakigori’s Elderberry & Elder Flower Espuma is a new flavour on shaved ice series. The generous portion of shaved ice (each bowl) is big enough to be shared across 2-3 persons. A whole mountain of shaved ice is filled with elderberry syrup all over with a thick layer of Espuma added as topping.  It tastes exactly like having a chilled wild berry yoghurt which gives kicks of sweet and sour berry flavours.  As you venture further into the shaved ice, there will be a little surprise awaiting (chunks of cheese) which  enhances the overall flavour and experience.

As I was rushing off to Uniqlo and Daiso to get some stuff, I left Alycia and Drama Queen at the cafe to enjoy the dessert.  But I will definitely be back at Kakigori with the girls to try other whimsical items from their exciting menu soon, perhaps at the next school holidays.