I woke up at 3:15 a.m. today to heat up the meatless Gimbap that Sherilyn prepped for us last night.  Then I woke Cass up so that she could have her meal as her last solid meal before the Cystoscopy today is at 4 a.m.  I was worried that this brat would push me away as she has issues waking up early! Thank God she got up the moment I jostled her from her sleep.  I thought that she’d have no appetite to eat at such an ungodly hour (she’s never eaten a meal at this hour before, besides her comfort sucking from birth to 3 years old) but she noshed the Gimbap and even asked me to reheat the butter garlic mushrooms that Sherilyn cooked yesterday. After the main course, she ate some cut papayas and drank a packet of Izumio and then went back to sleep.   Cass loves her sister’s cooking. Good, I can now retire as the deputy in-house cook and can handover this portfolio to Sherilyn 😁

The Cystoscopy today went quite smoothly without a hitch. I was allowed to follow Cass into the OT and left after she was knocked out by the anesthetist. Before I left, the nurse asked me to give Cass a kiss on her cheek. That was when I was overwhelmed with emotions. All the memories of May 2009 at GMC Penang came flooding back again. And here I am again, going through this the 4th time with Cass and all alone again in a freezing cold OT, waiting anxiously and praying fervently. And it looks like this is not going to be the last time as Cass will most likely require to go through another major surgery.

I sat alone at the waiting area outside the OT (photo below).  The place is devoid of people due to the hospital’s Covid-19 SOP.  The entire place is freaking cold and you know what? I left my jacket at home!!!!   Yesterday I put the jacket in my handbag but when I took my purse out in the morning, I took the jacket out and in my haste to leave the house, forgot to put the jacket back into the bag. Luckily I  had a shawl (made from sheer fabric!) in the hospital bag meant for emergency purpose. And if not for the OT scrubs and head cover that I had to don on inside the OT, I would have frozen to death 😅.

To generate heat to warm up my body and to beat boredom, I walked back and forth this cold corridor for almost an hour while saying my prayers for Cass’ smooth procedure. 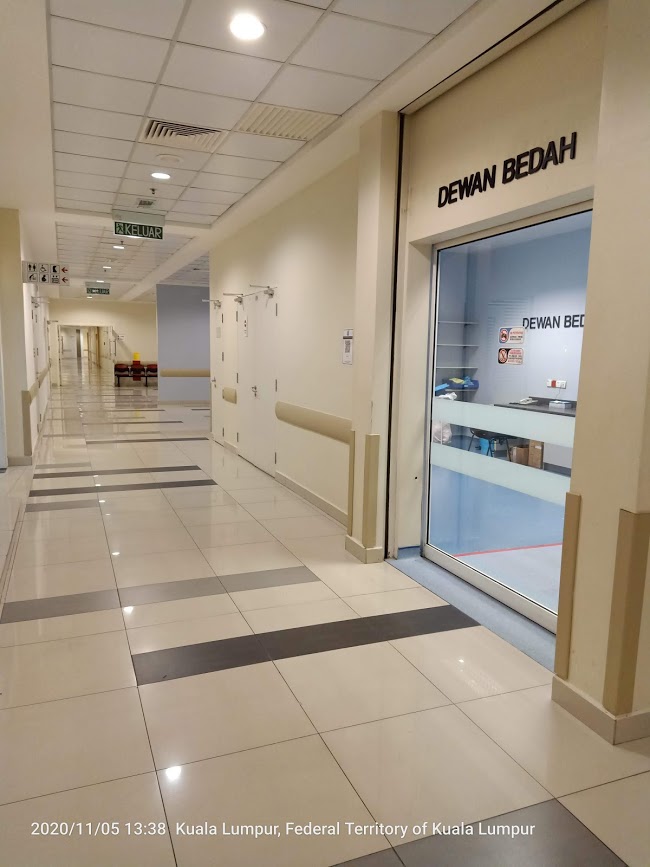 Out of boredom, I snapped this photo from the 8th floor of the hospital . 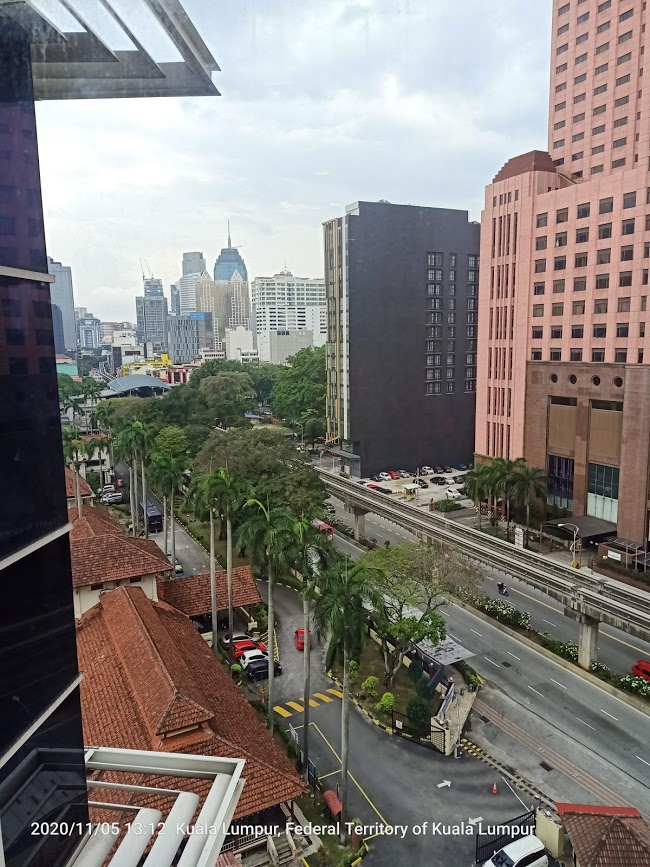 I managed to steal this photo of Cass at the recuperating bay in the OT. Cass will not be happy with me if she found out. Thus, I had blurred her face. 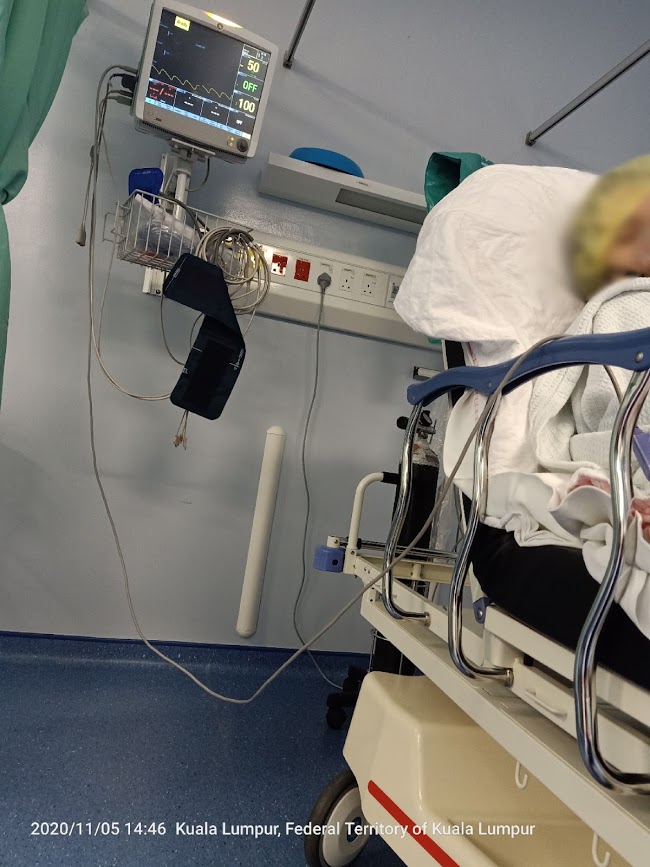 With the oxygen mask still on, Cass’ first few words when I asked if she was feeling OK was “I am so sleepy. This feels like History class” and then let out a tired chuckle😆

Once again, Cass and I were the last to be ambulanced back to the ward as she’s the oldest kid in the OT.   The hospital’s order of priority for all procedures is by age in ascending order.  The procedure started at 12:40 p.m. and we were only ambulanced back to the ward 3 hours later. We spent about 6 hours at the OT.  Cass was the last patient in the OT when we left at around 4-ish p.m.. It was Cass’ first time being wheeled into an ambulance on a stretcher. She was actually well enough to walk or be put on a wheelchair but again, we had to follow the hospital’s SOP.  After the ambulance dropped all the patients from the ward to another building where the OT is, the nurse even insisted that I wheel Cass on the wheelchair to the 8th floor where the OT is as she said that’s the hospital’s SOP.

When Cass was back in the ward at the Institute of Urology & Nephrology, she was almost 100% well again. She ate half of the keto Gimbap that Sherilyn made for me yesterday, ate half my walnut bun and ate the entire plate of rice with chicken and fried cabbage that the hospital provided. She was famished after more than 13 hours of dry fasting.

Below: the keto Gimbap that Sherilyn prepped last night for my lunch in the hospital. It was still very delish when I ate it at 4-ish p.m. 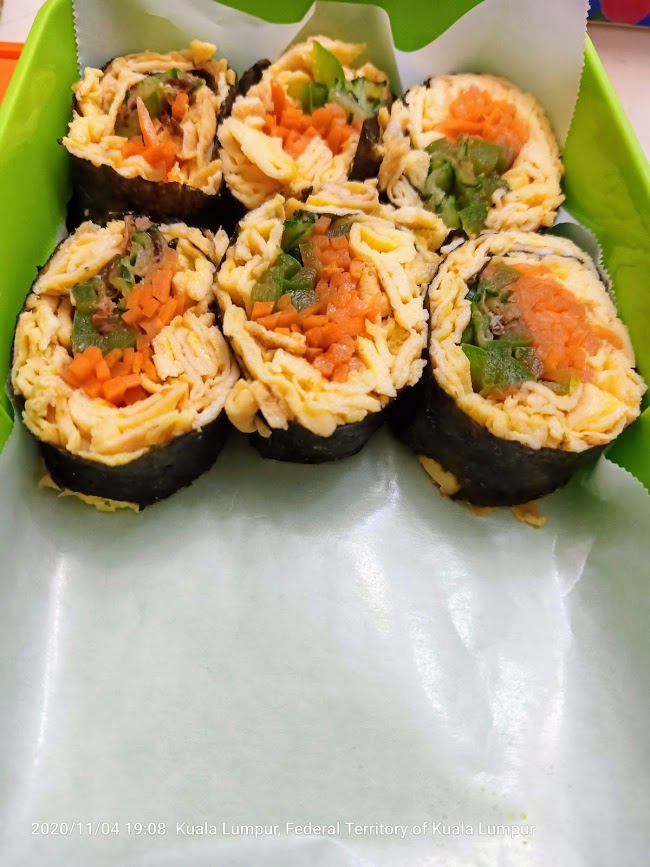 As for me, after two days of anxiety and deprivation of sleep, I lost another 1kg. My weight now is a mere 41.8 kg and I’ve been having heart palpitations the entire day 😔.