We had a mini bloggers’ meet at Paik Ling’s house today.  Initially, only Wen, Jaclyn and I were confirmed going and we did not plan to have a bloggers’ meet there, not at all.  We just wanted to see Baby Bradley and pass a gift to Paik Ling.  But as it turned out, there were 7 of us, minus the kids and my hubs.  Jazzmint and Sue (the 2 bloggers cum photographers)  were there for the newborn baby shoot for Baby Bradley.  We had a lot of fun yakking and yakking away and we made so much noise, we almost brought the house down lol!   Wen the leng lui and sexy mama was so kind she helped Paik Ling mop the floor coz Paik Ling’s maid had recently ran away.

My tummy was rumbling away as Paik Ling’s house was filled with the aroma of ‘jue keok choa’ (pig’s trotters in black vinegar) and red dates water…. and it was lunch time! I so wanted to try the jue keok choa but malu lar, hahahaha…..though Paik Ling kept offering me a bowl and some to bring home to eat.  We could have continued yakking but then it was lunch time and we did not want to disturb Paik Ling. 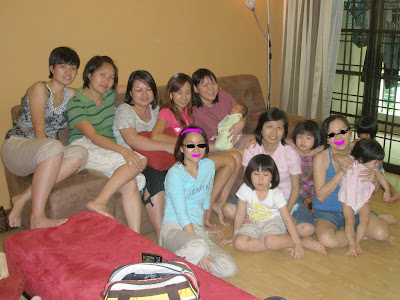 Left to right on the couch : Jazzmint, Sue, Jaclyn, Wen, Paik Ling and Baby Bradley
Left to right on the floor : Ginie (this leng lui doesn’t want her pretty face shown to the world wor), Alycia, Chanel, Sherilyn, moi, Baby and Faythe is behind playing.