Dancing Queen is feeling a little under the weather with a slight fever and on the verge of losing her voice.  But she insisted that she wanted to go to school yesterday as she has to rehearse for a drama. Told her to call me if she could not hold on anymore.  Her classroom is not air-conditioned (unlike her primary school) and being in the afternoon session, her classroom can sometimes transform into a sauna on a hot afternoon, which ain’t very good for someone running a temperature. Thank God after downing Izumio and Super Lutein and sleeping almost the entire morning, she was better today.  This is one of the perks of being in an afternoon session. And she has another year of honeymoon next year before she goes back to the morning session.

While Dancing Queen slept like a baby until 10-ish a.m., I quickly made a pot of  porridge in the rice cooker, then made a quick trip to the supermarket to get some minced pork for the porridge. I had about 2.5 hours to get the porridge ready for the sick girl to eat before she goes to school. 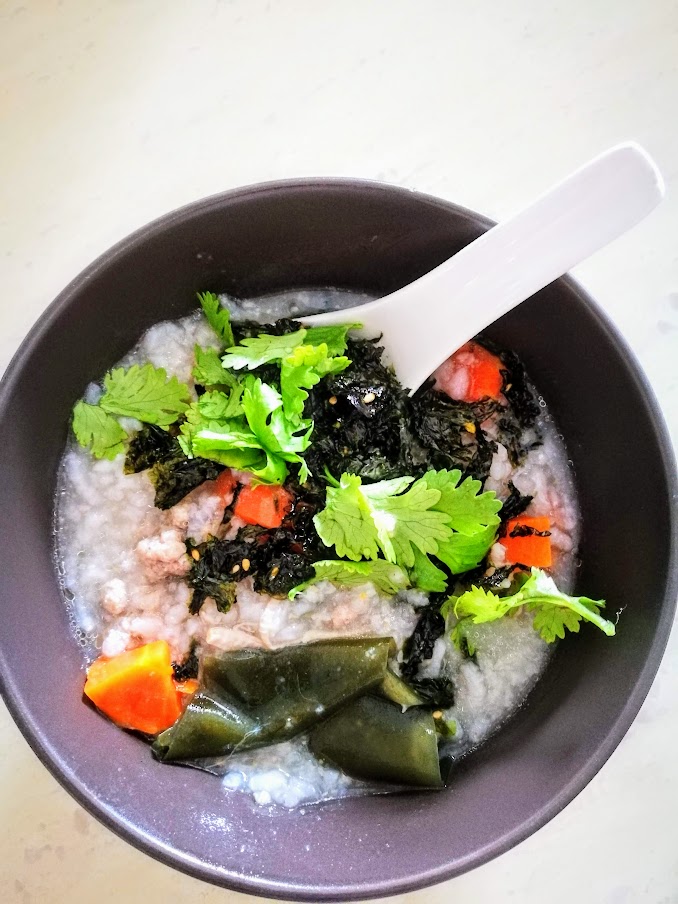 This bowl of goodness is composed of minced pork, carrots, kombu and a piece of dried shell fish (I have no idea what it’s called but the mil bought it from Hong Kong); seasoned with sesame seed oil, salt, pepper, organic soy sauce, coriander and seasoned Korean seaweed.  We had this for lunch and dinner.  Cass says she wants to have a bowl for breakfast at 5:30 tomorrow morning before going to  school and there is still another small bowl for my breakfast tomorrow. What a convenient and economical dish this is that can last us for 3 straight meals. And it’s yummo too!