The tooth fairy visited Sherilyn the 4th time last week and in the usual hilariously fashionable way, just like the previous three times as all were eventful and equally hilarious. I can remember vividly how her teeth came off the previous three times.   For the very first tooth, she cried and whined in discomfort for days.  The tooth was finally yanked off when I told her to jump and dance round the house vigorously, to shake the tooth off the gum socket.  The second time – she was crying and whining too and the tooth was yanked off the gums when I was brushing her teeth.  We could not find the tooth that dropped on the bathroom floor as it was covered with suds.   She blamed me like I had murdered her lover, for losing her tooth and thought that she had  swallowed it and we rejoiced like mad people when we found the tooth on the bathroom floor, covered with shampoo suds.  The 3rd time – we brought her to the dentist after she cried and whined (AGAIN!) over the discomfort.  The dentist sprayed a numbing agent on the gums and within seconds, it was yanked off effortlessly and she was not even aware that her tooth was extracted.

Now the fourth time was also eventful.  Daddy was supposed to bring me to Tesco to get some groceries and the girls had to stay home for tuition.  But this rascal cried and whined AGAIN and insisted that daddy called the dentist immediately to fix her an appointment.  So she followed us to Tesco (her main intention was to follow us to Tesco!) first and after an hour of shopping, on our way to the dentist’s clinic, her shaky tooth was bumped out from the gum socket during the bumpy ride from Tesco to the dentist’s clinic.  Again, all of us broke into a guffaw over how the tooth came off, in yet another fashionable manner.  Daddy had to call the dentist to cancel the appointment.  That was last week.  Yesterday, we went to Tesco again and told the 2 older girls to stay home to complete the work I had set for them as final exam’s next week.  But this rascal insisted on following us to Tesco and then to the dentist. But we said NO to her. The loose tooth could wait as it’s not really that loose anyway.  And I am now waiting to see how the 5th tooth comes off this time! 😀 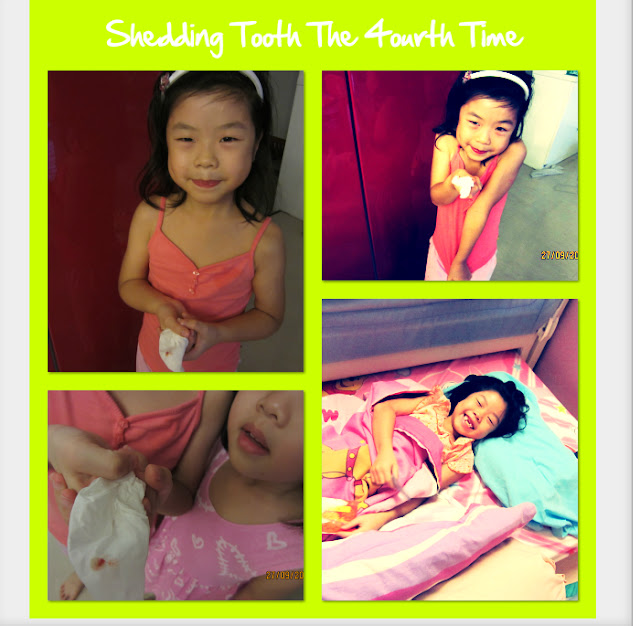 The tooth fairy placed a RM1 note (yup only RM1, lest this fler uses the money to buy junk in school) into an angpow packet with her tooth.  This fler placed her tooth in a red angpow packet and wrote her name on it somemore, which made hubs and I laughed till we teared.