This week has been a rough week for me. It first started with Alycia falling sick on Tuesday. She hardly gets fever these days but this time the temperature shot up to 41.3C with chills, a chesty cough and a throbbingly painful migraine that came in waves. The hubs and mil were pressing me (again!) to bring her to the doctor to rule out dengue fever. Each time the girls are down with fever, I get harassed to bring them to the doctor but I stuck to my guns. I told them that a dengue test would only be effective more than 4 days after the symptoms appear. But to quell their worries as well as mine since her temperature was above 41C, I bought a pack of Panadol and gave Alycia two capsules on the first day and one capsule on the second day.

On the second day when the fever did not subside and Alycia had migraine attacks that came in waves causing her so much discomfort (she was crouching on her bed in pain), I whipped out my Young Living essential oils and did a Raindrop Technique massage on her feet and back (spine). I used peppermint and Thieves. I did this thrice a day. Alycia also drank many packets of Izumio hydrogen water and chewed on raw Indian Borage (good for relieving cough and phlegm) and mint leaves from our little balcony garden.  Alycia was reluctant to chew on the  leaves but I gave her the choice of ‘leaves or antibiotics’?  She obediently chewed on the leaves twice a day.

On the third day, the day that I was supposed to bring Alycia to the hospital should the fever and migraine persisted, she woke up at 7 a.m. and happily announced that she’s all well already. Praise God!! My signature ‘ice cap’ on Alycia’s head. Cass swears by the ‘ice cap’ to bring down fever. It’s a frozen wet hanky that I put on her head whenever she has fever.

But the bug seemed to have bitten Sherilyn on the day that Alycia got well.

Sherilyn had similar symptoms of fever, headache and felt nauseous the whole day. She slept on the daybed the whole day and wrapped her body with a thick sweater and blanket. I had to  force her to drink liquid (water, Izumio and barley) and even had to drag her up from the couch to eat some fruits and take her shower.  It’s such a different experience nursing Alycia and Sherilyn.  Alycia listened to everything that I said like a patient to a nurse while the Drama Queen just lay on the daybed in such ‘dramatic’ fashion the entire day.

I administered the Raindrop Technique on Sherilyn too, with Peppermint, Oregano and Thieves essential oil from  Young Living.  Thankfully she got better just the next day. Today (day 3) she even went for tuition in the morning and Taekwondo in the afternoon, albeit feeling less energetic than usual with a mild headache. 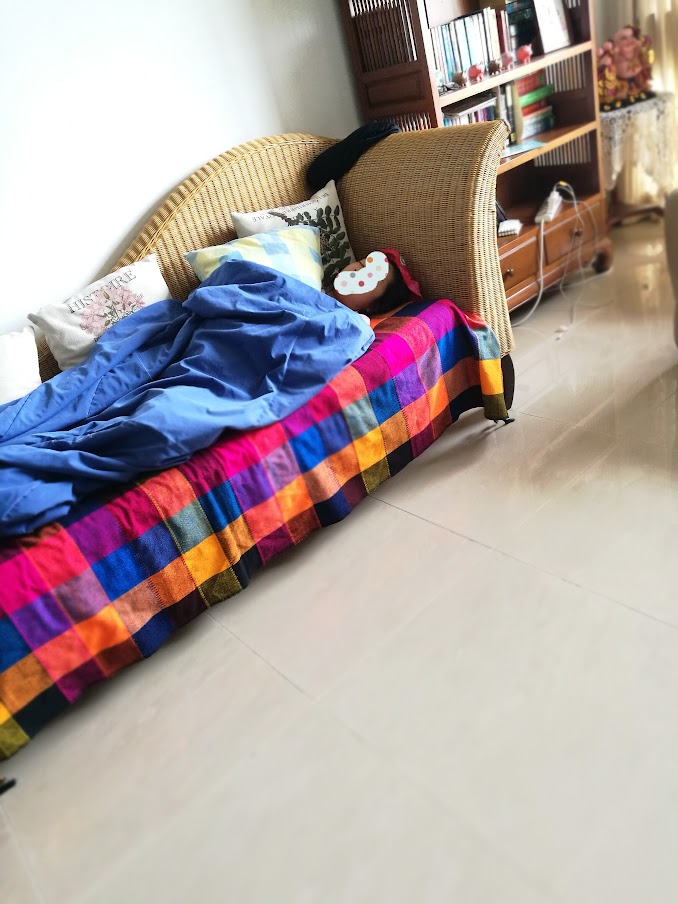 Cass and I are worried that we may be the next to be down with fever and we’ve been popping 3 caps of Super Lutein everyday to prep our body to fight off the bugs.

When it rains, it pours hard. In the midst of nursing two sick kittens back to good health, I banged my head hard on our marble dining table while squatting down to mop the floor and pick up the food crumbs that some people dropped on the floor conveniently!  There’s a bump on my head now.  🤕