Today Sherilyn was green with envy when we went to KLCC without her. We did not leave her out intentionally. It’s just that her ballet class clashed with Alycia’s first appointment with the Orthodontist and she must not miss the class as she is sitting for her Primary 1 ballet exam very soon.   After the doctor’s appointment, we went to KLCC as hubs needed to meet up with his Japanese chef friend at Chinoz, KLCC for some business talk. So Alycia, Baby and I tagged along and had a sumptuous light meal of sashimi and sushi for tea. During the time we were at KLCC, Sherilyn called her daddy and me on the mobile phone over 7 times till we had to hang up on her as she was merely adding up to the phone bill. 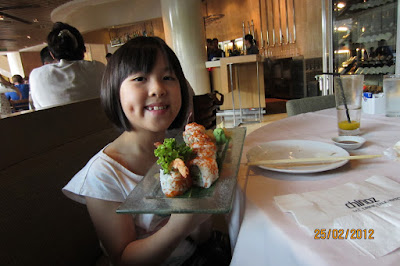 After the tea cum appointment at Chinoz, we went to the supermarket at Isetan. There was an on-going Japanese food fair there and boy, Alycia and Sherilyn enjoyed themselves to the max going from booth to booth sampling free juice, smoothies, Japanese snacks and Japanese Udon! I shall post pix of those mouth watering Japanese snacks in the Japanese food fair in my blogspot blog tomorrow. I really need to hit the sack now. I am drop dead tired and my brain is almost shutting down now! I need to wake up early tomorrow to run off those calories I had piled up today and to prepare Sherilyn for her trial ballet exam tomorrow.  Nite nite and happy Sunday peeps!