As I pulled Cass up from bed yesterday morning, I felt like I was holding a burning log on my bare hands. I asked her if she felt unwell but she said no.  She was really looking forward to going to school as she was to receive her trophy for a drawing contest that she won in school recently.

When I went to school to check on her at 10am, she told me that she felt freezing cold in her classroom, which is air-conditioned. She told me that she also had slight head pain, slight calf pain and ankle pain and oh, she also pooped in school. I asked my school-loving girl whether she wanted to go home and she said “yes”. She would never tell me that she prefers to stay home vs being in school.  She hates school holidays and would do anything to be  in school!  Anyway, the trophy giving ceremony has been postponed yet again to don’t know when. She was so disappointed. Poor baby girl.

When we reached home, Cass shivered after a warm shower. She demanded to put on a cardigan. With a sizzling temperature of 36 degrees Celsius outside, she wore a cardigan, GAWD!!. The past few days have been scorching hot. I could feel my own sweat trickling down my head just by looking at her all curled up on the couch, with no fan or air-cond turned on.  Anyone would develop a fever being dressed up in a woolen cardigan on such a sweltering and humid afternoon.  Her temperature was 40.3C. Never had Cass, Alycia or Sherilyn have such high fever before. It was definitely made higher by her wrapped up in her woolen cardigan in the afternoon heat. I had to discreetly turn on the fan to blow at her when she was fast asleep on the couch. I also used a frozen hanky to place it on her head to cool down her head. I am super paranoid when it comes to high fevers and brain damage. 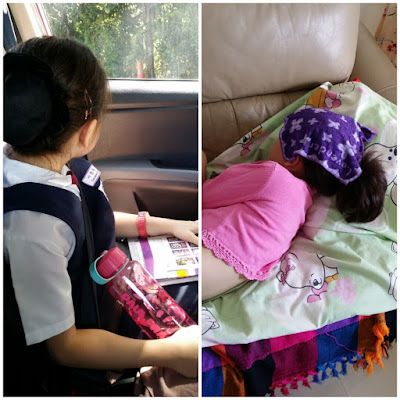 I kept giving Izumio hydrogen water to Cass. She had not much appetite and only wanted to sleep.   If her fever wasn’t above 40 degrees C, I would not have resorted to suppository. I am never in favour of drugs, not even fever meds.   But it’s the first time in her life that Cass had such a high fever. As a result of the high body temp, Cass’ eyes turned red (bloodshot eyes) slightly. I wanted the temp to come down fast to relieve her of the discomfort.  Coaxing her to allow me to insert the ‘magic bullet’ into her butt was another story. I had to resort to all sorts of bribes. Now I owe her something on her bucket list!  No choice. Her health comes first. I was only afraid of the consequences of a high fever – brain damage and febrile seizure.  I have heard too many stories of friends’ kids with febrile seizures and brain damage resulting from high fever.

Within half an hour of insertion of the suppository, Cass’ temp came down.  During this few hours window of feeling good, I gave her a slice of bread and pumped her with more Izumio and barley water. She also felt well enough to do her homework. Dinner was rice with soup. Yesterday was meat-free for Cass.

Though Cass still has a temperature ranging from 38.5 – 39 degrees Celsius today, I am glad that she is quite her usual self again. It’s good to see her jumping around, singing and being mischievous again 🙂 It is only when your child falls ill that you wish that she is naughty again.   I have not given her a suppository today and hope that I don’t have to resort to it.  Appetite isn’t ravenous yet.  Today is another Izumio pumping day, along with Manuka honey + bee propolis, fruits smoothie and sliced cool cucumber.  I have given her 10 packets of Izumio since yesterday morning.

What is causing the fever?  I have no frigging idea but it is not a UTI (urinary tract infection) as there are no symptoms of it.  I think it must be the tonsillitis bug from the hubby. He’s currently down with inflamed tonsils and a strep throat. Her body must be fighting hard against the bug, thus the fever. I’m hoping that this is the cause and nothing else.