As planned, we left the house at 9ish am today to escape the crawl into KLCC.  Traffic was pretty good and we breezed into the KLCC car park.

This is the KL skyline at 10am, which was very hazy and not a single cloud was seen in the sky. 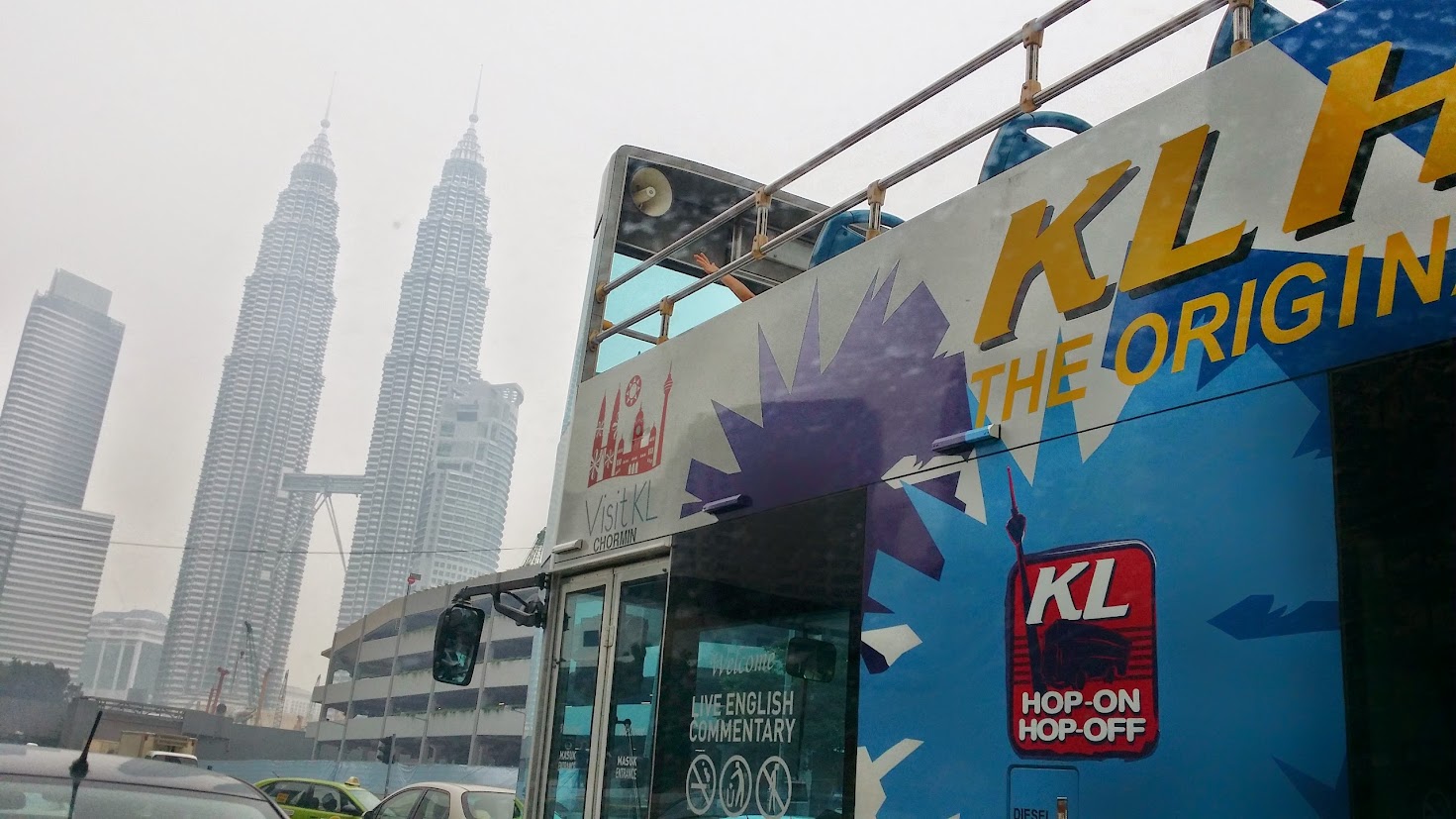 We charged the English books level first and the girls scooped over 20 books from this section! 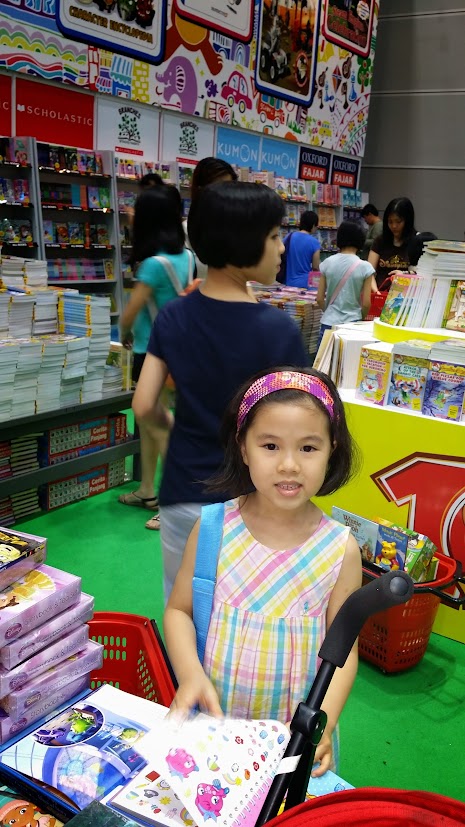 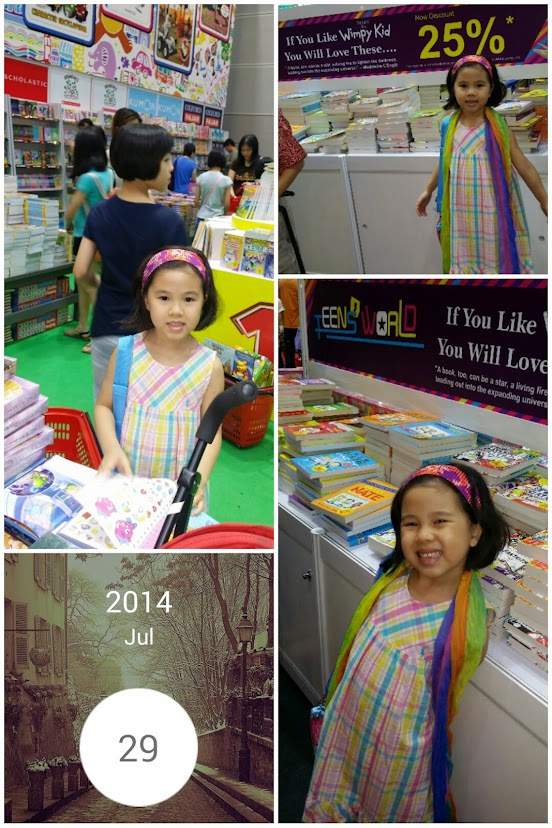 Roald Dahl, Wimpy Kids,  39 Clues, Geronimo Stilton and most of the popular kids story books are on a 25% discount!  Alycia and Sherilyn were on cloud 9 at the book fest!  It was like a dream come true for them when their daddy gave them the green light to  fill up the trolley luggage bag that we brought along with books! 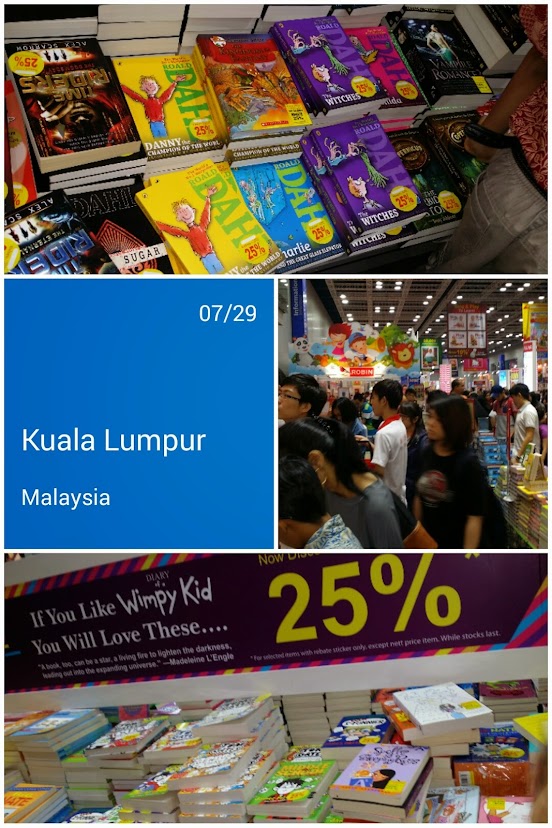 Enid Blyton hard cover books going for RM8 each for purchase of 2 and above! 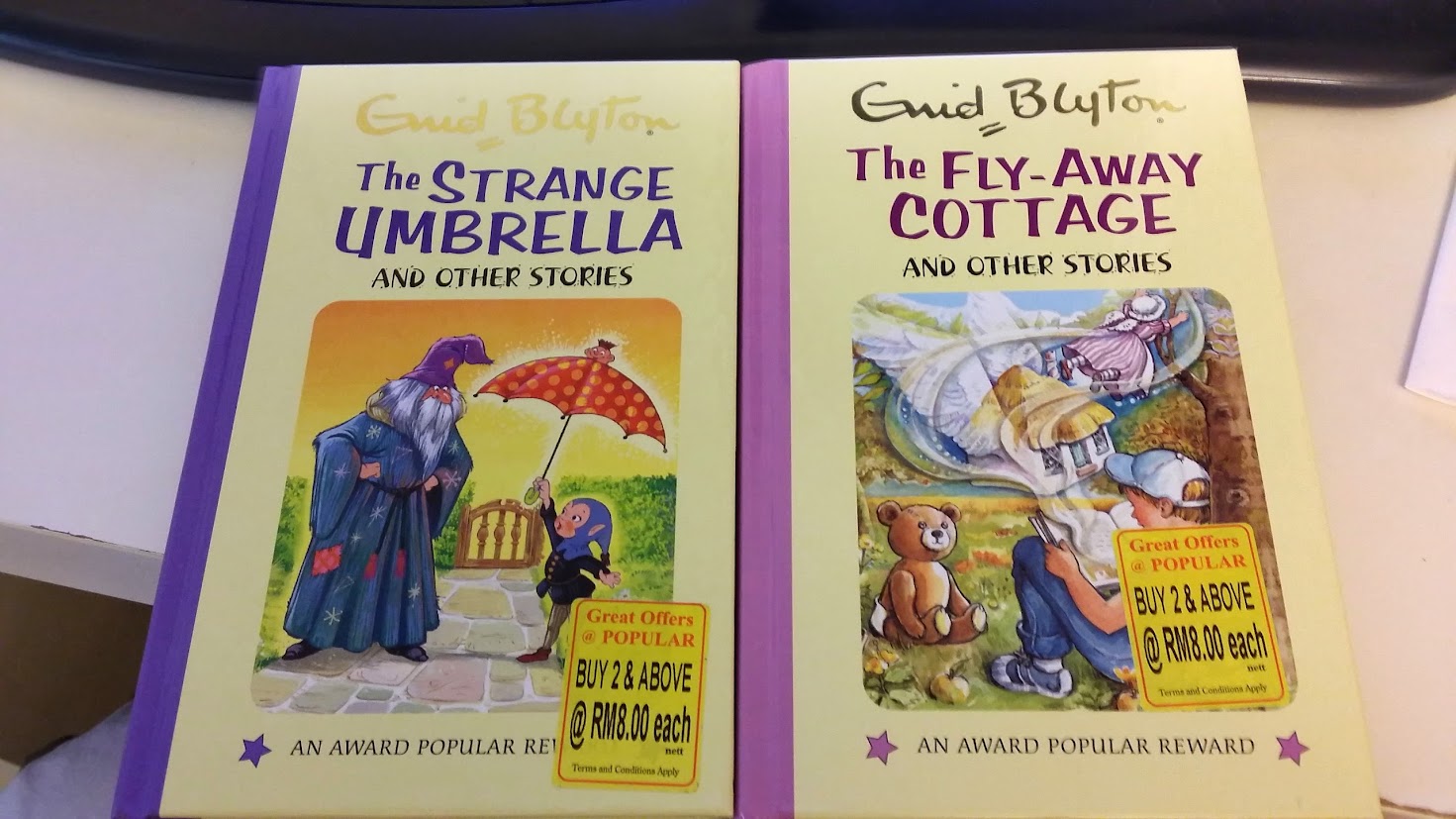 Some of the activities lined up at the book fest — experiments for kids and cook shows. 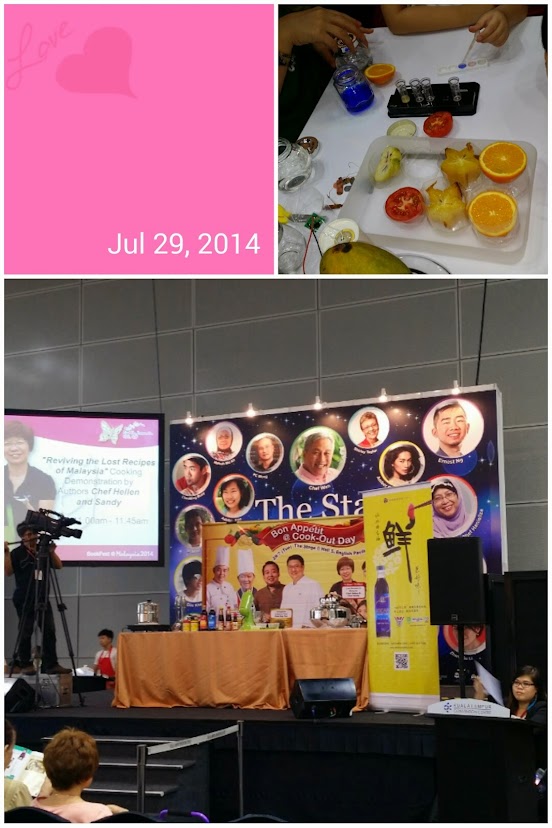 All the halls were sardine-packed with book lovers. I could hardly stretch out my arms at the halls.  Every available space was filled up by people.  I hate being in such a horribly crowded place but the strong air-conditioning and good ventilation made our 2-hour shopping spree bearable. 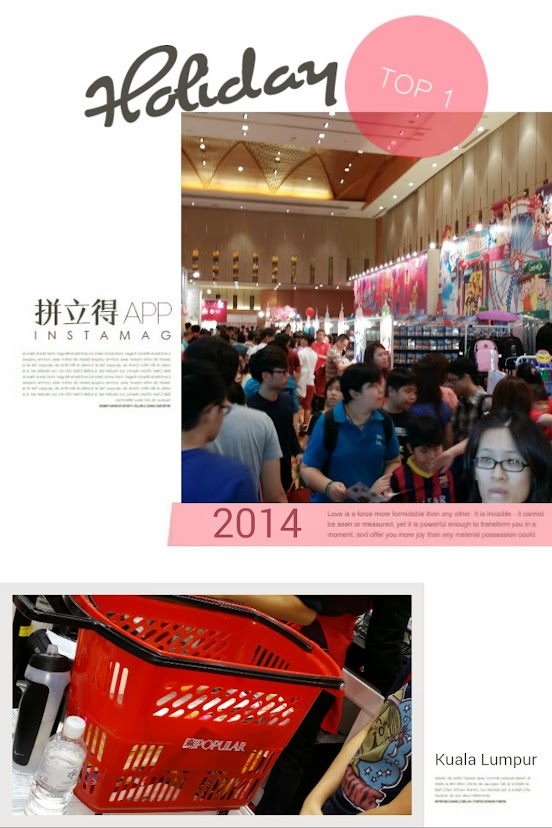 Part of our loot, from the English books section only.  Next, we charged the Chinese books section, the school workbooks section and lastly, the stationery section.  Hubs had never been that patient doing shopping (for 2 long freaking hours!), all for his 3 princesses.

Alycia and Sherilyn the moment we reached home… 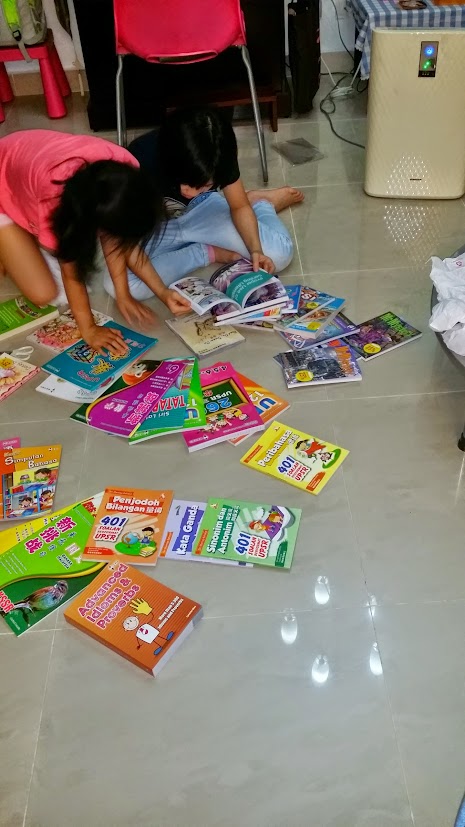 Part of the girls’ loot… 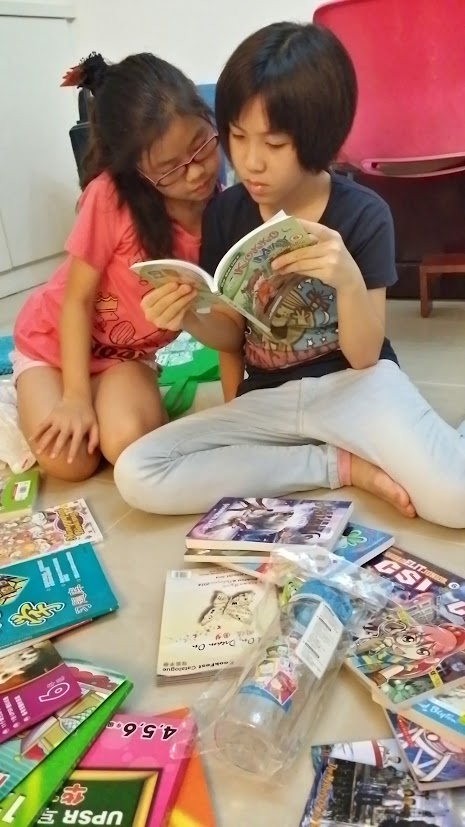 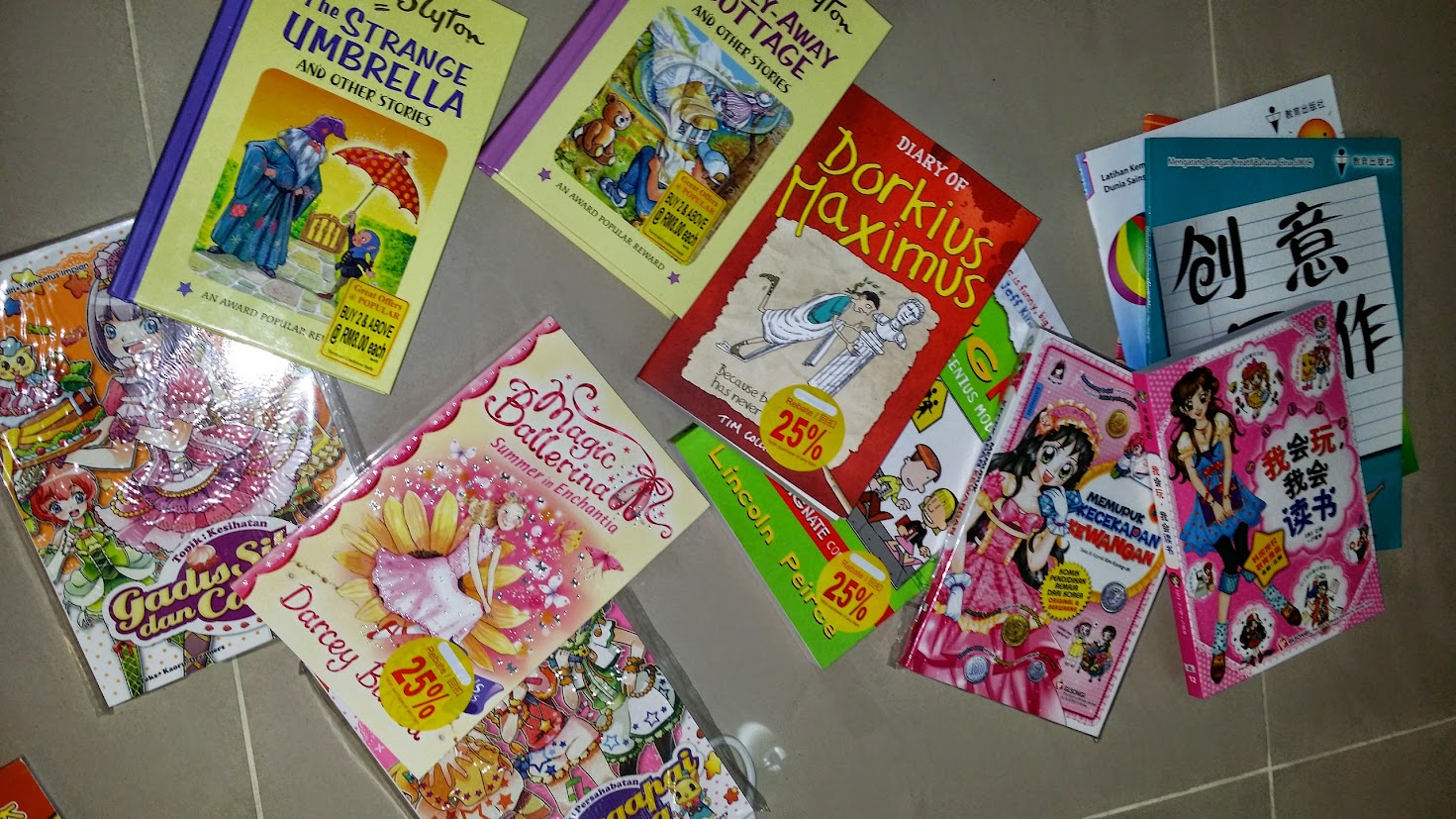 Flavours magazines for the foodie hubs. 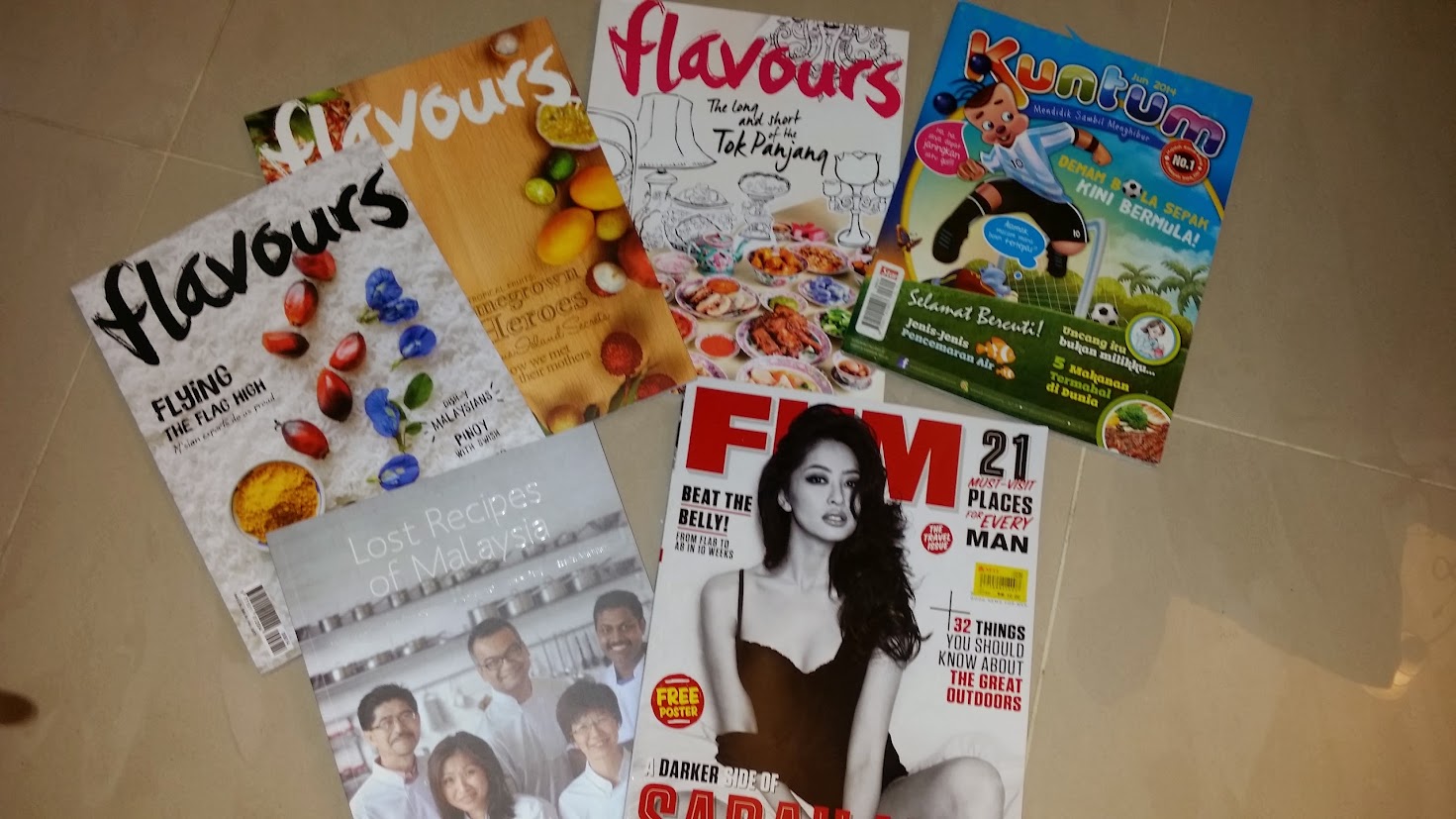 Tumblers of various brands are going at half price. I got this Gemeilia tumbler for Cass at only RM8 (half the price of RM15.90).  I wanted to grab a Paul Frank tumbler for myself and get more BROS tumblers but I was worried that hubs would flip when he pays for them. So I placed all the tumblers back with a heavy heart.  He had earlier paid RM400+ for a bag full of books *GULPS*! 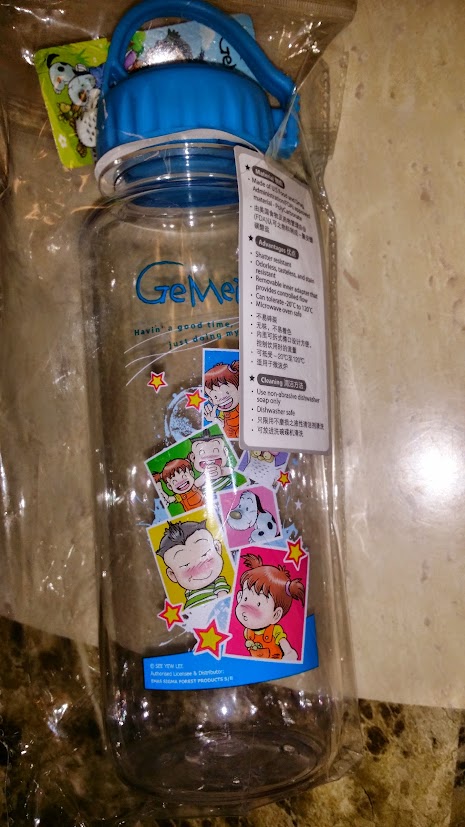 I also bought workbooks for the 3 girls to be used for next year.  All workbooks are discounted and some with a 50% discount.

The total damage at the Popular Book Fest was about RM500 and the amount that we saved is substantial.

After spending 2 hours at the book fest, we went to Isetan  to have lunch at the Japanese eatery, did some grocery shopping and then had tea and cakes at Harrods Cafe.

When we left KLCC 5 hours later, our car park bill was a choking RM16!!

Would we come back again next year?  Tempted too but I really hated the crowd at KLCC.  It is bad this time as it is the long Hari Raya holiday.  It was a sea of people at the entire KLCC and the Convention Centre.  The majority of the people at KLCC were foreign laborers.   We had to inch our way up the escalators, queue up to use toilets and I had a phobia of losing sight of my girls.  When the queue at one of the toilets was too long, I went to the pay toilets and was told to pay  RM8 for my girls and I to use the toilets!  I rolled my eyes and walked up the escalator to find another toilet.  I spent over half an hour just to bring my girls to pee, shoots!

I hope you’ve had an enjoyable and relaxing Raya holiday.  Tomorrow Cass has to attend kindy while her 2 che ches are off school until Sunday.

The Popular Book Fest held at the KL Convention Centre is ongoing until Sunday, 3 August 2014. If you want to breeze your way into the KLCC, plan and start your journey early. Be sure to reach the place before 10am. Have a good breakfast at home first to get the energy that you need to walk, scramble your way and wade through the flood of people and to shop for at least 2 hours 😉