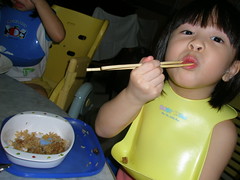 Yes, Alycia has finally mastered the chopsticks.  Now, she doesn’t want to use the spoon and fork anymore whenever she eats noodles but requests to use the chopsticks instead though she’s taking longer than usual to eat with chopsticks.  And she’s really proud of her achievement!

What would you like to do with your money if you have some extras? Would you like to invest them in stocks and shares, place them in a Saving account in a bank or lend them to people who need your money and earn good rates out of it? Yes, you read me right. You can actually reap more money out of your money when you lend them to people who need them at Zopa, the world’s first lending and borrowing marketplace in the U.K.   Zopa is not a bank but a fully licensed  lending and borrowing marketplace backed by the same investors of eBay, Skype and Betfair.

At Zopa anyone from students to professionals, entrepreneurs, pensioners, housewives or just about anyone who has the wherewithal can ‘invest’ in their money by lending them to people who want the money.  The lender sets the rate on the loan to the borrower based on the borrower’s creditworthiness. There is a proper and legally binding contract between the lender and the borrower, to which the borrower repays the loan via direct debit.

‘Investing’ your money in Zopa is like placing money in a Saving Account  in a bank but you earn better interest rate. It’s a good alternative to placing your money in a bank for the lender and for the borrower, you too get better rates than borrowing from a bank.   Zopa is truly the ultimate marketplace for those who have the money and those who need the money.